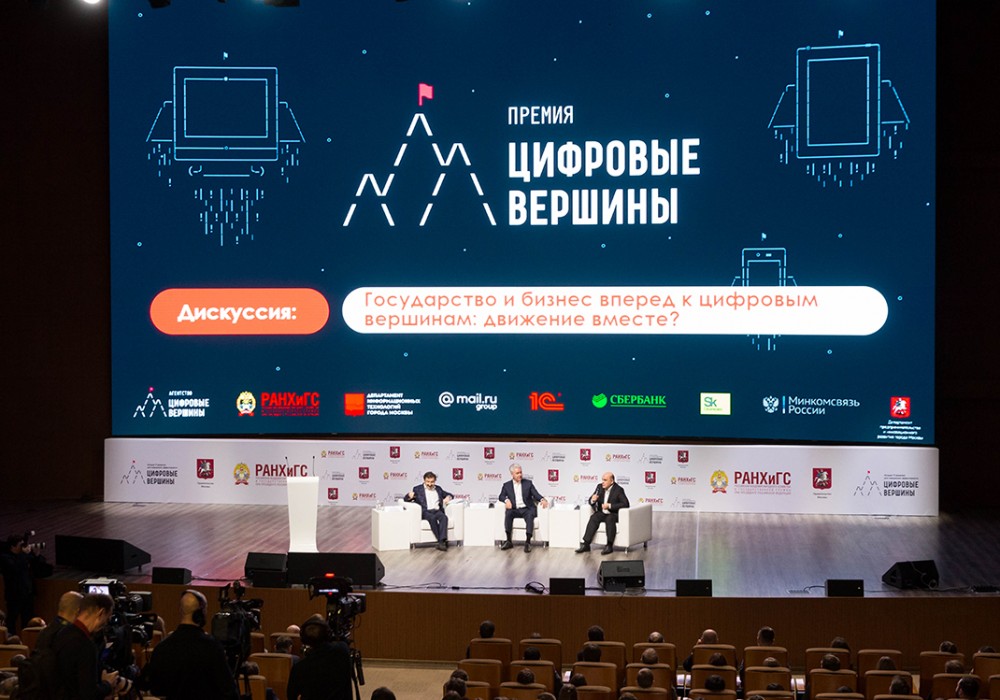 On December 11, the final stage of the 2018 Digital Summit Award was held as part of the Digital Summit Forum. The best IT solutions for government and business were presented at the Digital Business Space platform in Moscow. Moscow Mayor Sergei Sobyanin and Head of the Federal Tax Service Mikhail Mishustin took part in the plenary discussion moderated by RANEPA Rector Vladimir Mau.

Moscow Mayor Sergei Sobyanin said at the ceremony: “There are no actual summits in digitalization. It is an ongoing process – you move either quickly or slowly. There might be a peak somewhere ahead, but we will never see it: the world is constantly changing. Here is one simple example – we have introduced digital patient records in healthcare. And, after developing this system, collecting and processing large amounts of data, we can confidently say now that after some time, we will have a trajectory of their health – and this will be a breakthrough. I am sure that in many industries, Moscow will be the leader among all the smart cities in the world”.

Vice President and IT cluster CEO Konstantin Parshin also shared his observations: “Moscow is now on the list of leading cities in digitalization. And the higher the level of digitalization, the higher the demand for it. This is not just about the new technology implemented, but also about a wealth of data. The more data you have, the more new products you can create based on it. Therefore, Moscow is interesting to everyone: developers, investors and startups. This city knows how to buy digital services and knows what to do with them. I would say that Skolkovo sees cooperation with such conglomerations as Moscow as its important task, to create the largest possible barrier-free environment for startups”.

The final stage of the 2018 Digital Summit Award took place during the forum; IT specialists presented their projects to a jury of IT experts, as well as managers from across the country.

“The idea behind this contest is that the users themselves determine the projects that most effectively help them meet their management goals. Representatives of ministries, government agencies, and regional authorities sat on the Digital Summit Award jury. They came from the Kaliningrad, Arkhangelsk, Novgorod, Voronezh, Kaluga, Belgorod, Ryazan, Leningrad, and Tula Regions, and the Republic of Mordovia. The management of Russian Railways, Sberbank, Roscosmos, and Rosatom showed great interest in the contest, wanting to see effective digital solutions, crucial for modern management”, - said Larisa Katysheva, program director of the Digital Summit Forum.