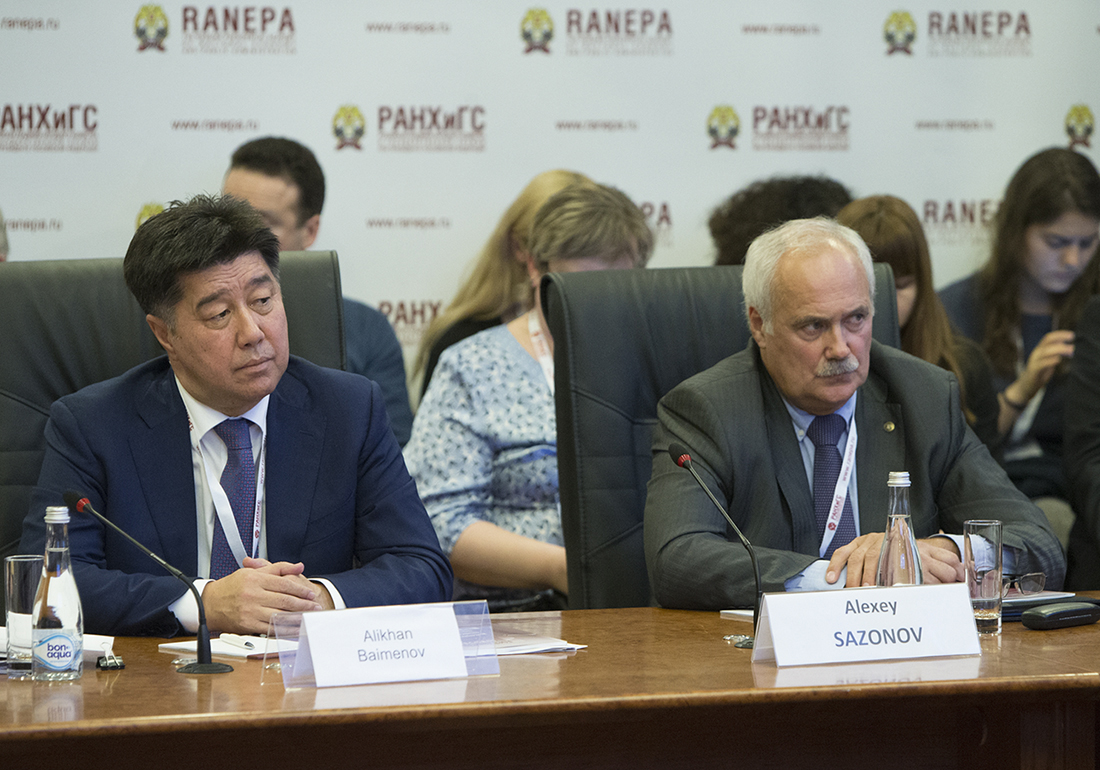 The second day of the Forum ended with an expert discussion on the pilot projects of the Network Academy of Public Administration of the CIS countries and implementation of joint training programs for personnel training by partner educational universities in priority areas of economic and socio-cultural integration. They will help to create an atmosphere of trust, common understanding of values and prospects for the development of long-term cooperation between the participating states.

The session was opened by Alikhan Baymenov, Chairman of the Management Committee of the Regional Hub in the field of civil service in Astana (Kazakhstan), noting that the relevance of the stated topics of discussion was already confirmed by speeches of speakers at other discussion platforms of the Forum. He explained that global trends are observed, such as increased requirements for public administration by citizens and regional peculiarities. “In our region, there is a lack of applied research in the field of civil service,” the Chairman of the Committee added.

“Our network programs are aimed at improving the skills of public officers, this gives them a competitive advantage over other programs and allows to accelerate cooperation between the participating countries,” Andrei Margolin, Vice-Rector of RANEPA said. According to him, agreements have already been signed with Uzbekistan and Tajikistan, as well as Belarus and Armenia. Negotiations with Kyrgyzstan and Kazakhstan are at an advanced stage. “We did not use the full potential of cooperation, we still have reserves,” the Vice-Rector added.

Fatima Zhakypova, Rector of the Academy of Public Administration under the President of the Republic of Kazakhstan, announced a new project - digital co-working and a holographic lecture hall for public officers undergoing training, as well as the upcoming training “Public administration based on data” jointly with the UN. “The digital economy makes people happy,” the Rector said. That is why now in Astana a large number of relevant programs are being implemented using a strategic approach based on analyzing the range of potential opportunities, scanning horizons and building scenarios.

The topic of the announcements was continued by Lutfiya Abdulkholiqzoda, Rector, the Institute of Public Administration under the President of the Republic of Tajikistan. According to her, the Network Academy projects are already bearing fruit: a large number of joint educational programs between partner universities are being implemented. In particular, new agreements have been created in the field of advanced training of public officers, which will be implemented this April.

Rustam Kasimov, Advisor to the President of the Republic of Uzbekistan, Rector of the Academy of Public Administration under the President of the Republic of Uzbekistan, noted that the activities of the Network Academy are primarily aimed at strengthening and expanding ties between neighboring countries. At the same time, he considers the training of public officers to communicate with the public to be an equally important task.

According to the results of the expert discussion, a meeting of the Public Council of the Basic Organization of the CIS countries for training in public administration will be held, whereat it is planned to approve a plan for the development of cooperation for 2019, and to decide on the publication of the thematic issue of the magazine “Public Service” devoted to the analysis of best practices in public administration in CIS countries.