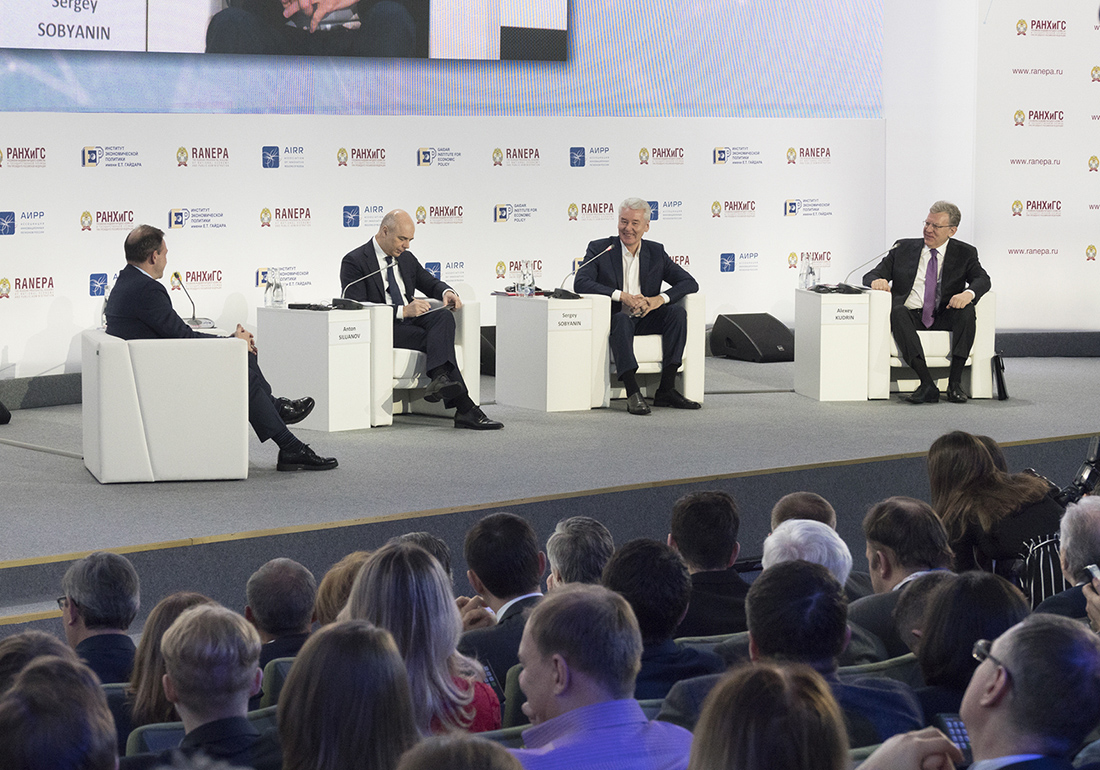 The national development goals of Russia until 2024 and implementation of the new May decrees of the President of the Russian Federation were discussed on the second day of the Gaidar Forum. Moderator of the discussion was Sergey Brilev, Deputy Director General for Special Information Projects, Rossiya TV Channel.

Anton Siluanov, First Deputy Prime Minister of the Russian Federation, Minister of Finance, stated that national projects are just tools to achieve higher-level goals. According to him, the government has a plan for each national goal to enable its implementation.

‘National projects are rather a tool to manage goals and objectives, than resources... This is innovation in our governance. And I am sure that, thanks to the system being formed up from the federal to the municipal level to meet global challenges and thanks to the monitoring system being formed up, and the system of engagement of all government and local self-government authorities, we will attain the objectives in hand,’ Anton Siluanov said.

When discussing national projects, Alexei Kudrin, Chairman of the Accounts Chamber, said that currently there are no final versions of national projects yet. According to the Accounts Chamber, the May 2012 decrees of the President were fulfilled by 70% only and no full-fledged discussion of their implementation was held. ‘In 2012, many goals and objectives were set, and I believe there was no real progress review, we did not discuss the results. One of the figures, i.e. fulfilled by 93%, was declared; according to our estimates, there are 70%, including many formal things that were fulfilled,’ Alexei Kudrin said.

According to him, ‘a completely new frame’ was created to fulfill the Decree of the President of Russia On National Goals and Strategic Objectives of Development of the Russian Federation until 2024. Now, personal responsibility for the implementation of not only every national project, but every goal in it will be assigned to the deputy prime ministers as supervisors and ministers as executive agents.

‘Now, one more document format emerges, that is, national goals implementation plans, and they shall be wider than national projects. That is why I would like to say, right of the bat, that national projects, even when fully implemented, do not ensure the implementation of national goals in full,’ the Chairman of the Accounts Chamber clarified. According to him, for example, no special programs are developed to implement such a national goal as increase in the number of enterprises implementing technical innovations by up to 50% of the total number.

In addition, the Chairman of the Accounts Chamber emphasized the need for other institutional and structural steps. ‘We have been always talking about reduction (of presence – note by organizers of the Forum) of the state in the economy... Powers of constituent entities should be substantially increased, part of land resources should be transferred to constituent entities. These are serious structural steps, not all of them are stipulated in national projects yet. I believe that we need additional political measures to create drive and economic growth,’ he said.

Alexei Kudrin underscored the possibility to reform the state administration, supported the initiative of the Prime-Minister Dmitry Medvedev to reduce regulatory load on business, having called the idea bold and positive.

Sergey Sobyanin, Mayor of Moscow, Head of the Working Group of the State Council for Implementation of the May Decree of the President of the Russian Federation told how national projects help implement goals and objectives at the regional level. ‘National projects make an additional contribution of about RUB 500 billion to regional budgets annually, exactly for those goals and objectives that they have set themselves before that... This is spent on education, healthcare, redevelopment, roads, etc. That is, this is on top of the regional budgets. They also give some sort of synergy, supporting regions,’ Sergey Sobyanin noted.

Participants of the discussion considered challenges and opportunities of the established system. In particular, speakers made a point on the risk of integration of all participants of the system from the federal to the municipal level.

‘All national projects are assigned and distributed in state programs, and assigned in the budget planning. There is the only way to get into the budget, though a state program. Although we do not want to focus on priorities, but it turns out that one state program shall implement several national projects. Thus, we are constantly losing focus. A single person, in charge for the implementation, shall keep focus, manage resources and work for three deputy prime ministers. This is quite a complicated system,’ Kudrin noted.

The First Deputy Prime Minister of the Russian Federation noted that the government approached the interaction with entrepreneurs pointwise. This regards both large and medium-size business.

In conclusion of the panel discussion, Anton Siluanov noted that Russian people will feel the effect of implementation of national projects in various spheres of their life soon, including medicine, infrastructure and possibility to develop business.