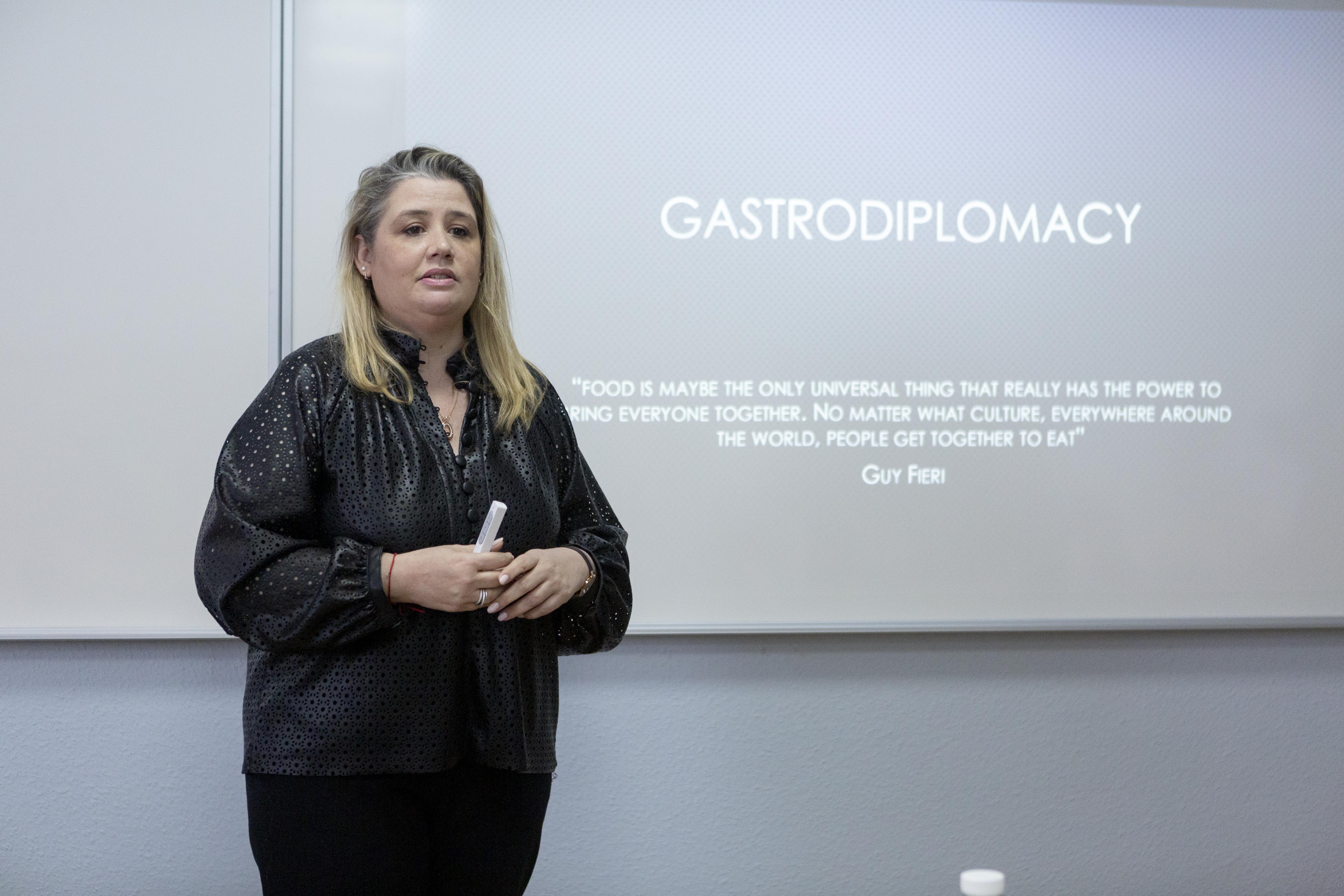 The Presidential Academy hosted the first lecture in the Diplomatic Meetings series as part of the Gastrodiplomacy training module for International Relations students at RANEPA Institute of Business Studies (IBS-Moscow). The speaker was Maria Victoria Stoger Rodriguez, Minister Plenipotentiary of the Embassy of the Argentine Republic in Russia.

Before the lecture, the diplomat had a working meeting with RANEPA management to discuss prospects for the school’s cooperation with the Argentine mission in Russia and practical steps to establish ties with its universities and business schools. Attending the meeting were Vice-Rector of the Academy, Director of IBS-Moscow Sergey Myasoedov, Dean of the IBS-Moscow International Relations Department Irina Timonina, RANEPA Director for Development of International Education and Cooperation Larisa Taradina and President of the International Center of Wine and Gastronomy, Research Supervisor of the Gastrodiplomacy module at IBS-Moscow Leonid Gelibterman.

Opening the meeting with students, Sergey Myasoedov told the audience he was sure they would have a constructive conversation with the lecturer and expressed the hope that the new information about Argentina's food traditions would be useful in their future professional activities.

The diplomat also explained to the students how Argentina was fostering a unique and attractive image in the international community. The country’s recognizable gastronomic hallmarks such as meat, wine and mate drink contribute to the successful promotion of its nation brand. She added that, according to research, food is one of the most important items that people consider before travelling to a country, and pointed out the growing popularity of gastronomic tourism in her country.

At the end of the lecture, the diplomat presented a strategy for the development of gastrodiplomacy in Argentina. Maria Victoria Stoger Rodriguez said the project was part of promoting the country’s nation brand and included opening of local cuisine restaurants, trade marketing and holding international gastronomic fairs.

“This meeting has given us the idea of how Argentina was using gastrodiplomacy. It was also interesting to hear about winemaking and traditional dishes in Argentina. Ms. Stoger is an excellent speaker, and her presentation inspired us to go deeper in studying the South American country,” Alina Akchurina, a third-year International Relations student at IBS RANEPA shared.

“The information Ms. Stoger gave us is definitely useful: she explained the guidelines and strategy for the development of Argentine gastrodiplomacy. Gastronomic diplomacy is a fascinating component of international relations. I hope we will be able to apply it in the future,” Anastasia Safonova, a third-year International Relations student at IBS RANEPA said.