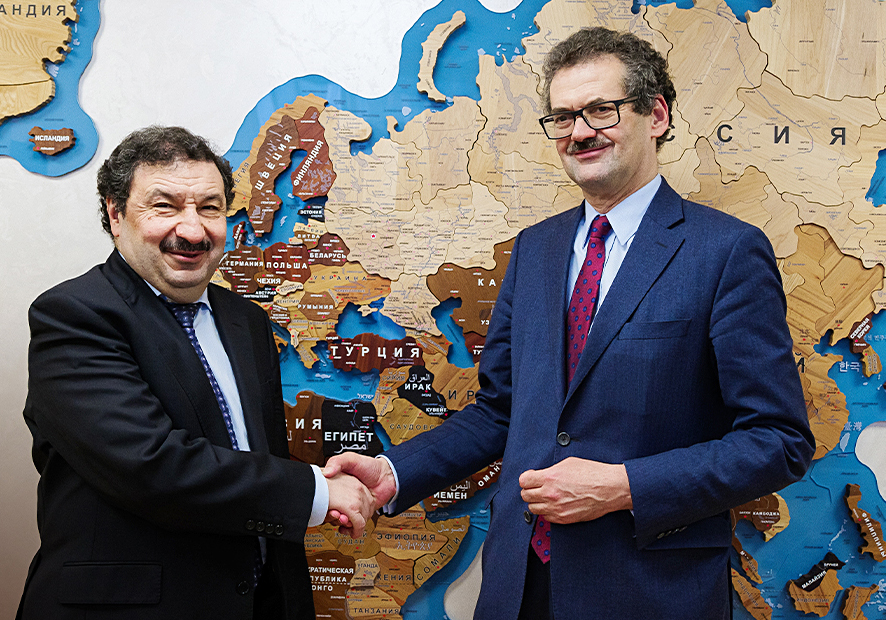 Dr. Werner Almhofer, Ambassador Extraordinary and Plenipotentiary of the Republic of Austria to Russia, has visited RANEPA. The meeting was attended by Rector Vladimir Mau, Vice-Rector Dmitry Butashin and Martin Sajdik, Advisor for Eastern Europe to the Austrian Foreign Minister.

At the meeting, Vladimir Mau presented the Academy's projects as well as its international research achievements, and shared its plans for promoting internationalization of higher education and cooperation with Austrian universities. In particular, this year, ISS RANEPA begins academic exchanges with the University of Applied Sciences Burgenland, while ILNS RANEPA is to sign a memorandum of cooperation with Karl-Franzens University of Graz on jurisprudence programs.

The Austrian guests’ visit included a tour of the Academy. RANEPA Research Library staff showed the diplomats a collection of rare illustrated books in German, as well as photographs and publications dedicated to the Academy’s centenary.

The Ambassador shared his thoughts on the development of international student exchanges between Austria and Russia: “Austria does not have as many universities as Russia, but student exchange is ongoing between our countries. Students from Russia study at Webster University Vienna. Our ties with RANEPA are growing; they hold much prospect. After today's meeting, I will certainly recommend the Academy to my younger fellow citizens as a must-see in Moscow,” he said.

Werner Almhofer, a graduate of the University of Vienna, PhD, used to be a lecturer at the University of Bari in Italy, where he taught Austrian Literature and Culture to Humanities students under a bilateral agreement between Austria and Italy. “I must admit that I miss working at the university. I felt a real direct connection with my students then, and this is something I miss so much now. I would certainly miss this interaction, communication, if I had to teach remotely today,” the Ambassador added.

Martin Sajdik used to serve as Austria’s Ambassador to China, and the Ambassador to the UN in New York. He can appreciate the power of foreign language proficiency and soft skills like no one else. “Speaking foreign languages ​​is a key element of education – not only English, but also Spanish, Russian and others,” he said. “Speaking foreign languages ​​is not just a way to communicate, but a way to understand other cultures and other peoples. Soft skills are exactly what is lacking in Russia, I think. You always have strong skills, but you need to develop soft skills in communication. It is about listening to another person, opening your eyes, your ears and your soul, trying not to impose your opinion, to build relationships with other people and understand their capabilities.”

Student exchanges and virtual mobility can contribute not only to the internationalization of higher education in the world, but also to the development of these skills. “This is also a key question. All students in Europe have the opportunity to take at least one year in another European country. The Erasmus program is simply a godsend. I wish it were available when I was younger. Nevertheless, I went to study in Moscow, then took one year in the United States, and then in Italy. This means it was possible even then, half a century ago, and now I definitely urge everyone to take advantage of such opportunities,” Martin Sajdik said.