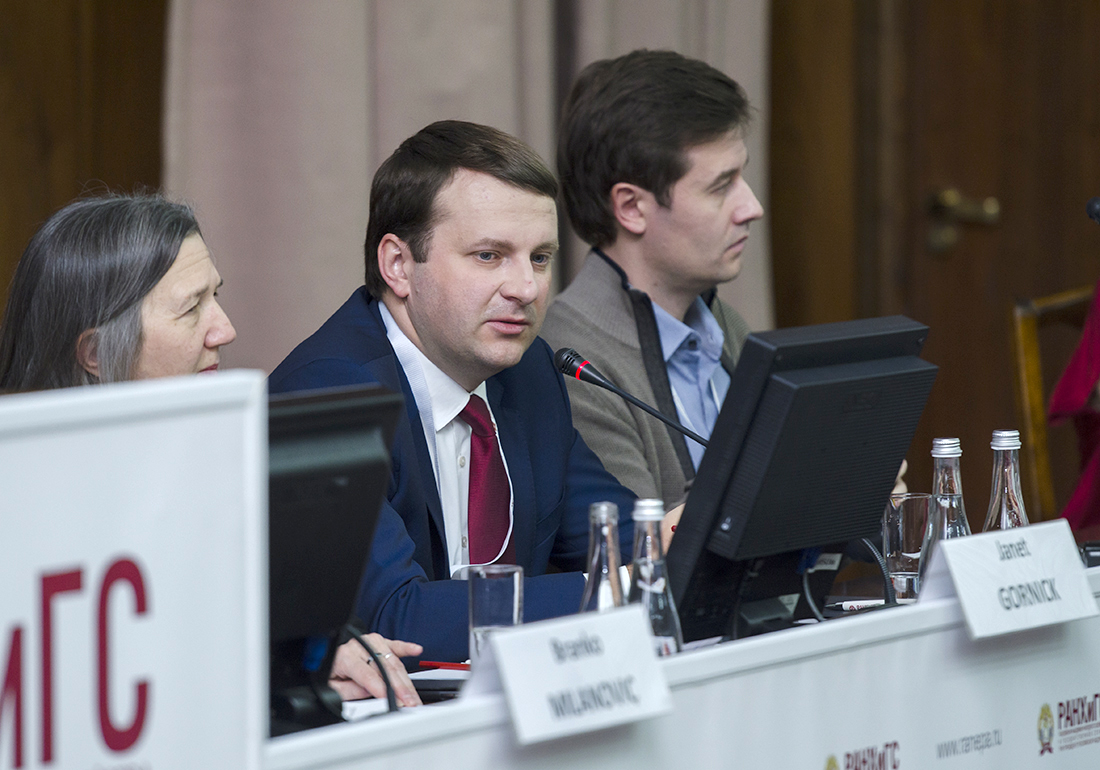 On January 15, within the frames of Gaidar Forum, the expert discussion on the topic of “Income inequality through history” was held. Experts shared their points of view regarding economical inequality involving historical, demographical, and gender respects affecting the situation in Russia and in other countries.

The discussion was open up by Janet Gornick,, Professor of the City University of New York, Director of the Stone Center on Socio-Economic Inequality. The expert highlighted topics of inequality development in the USA. Currently, there is a considerable income disparity in the USA, and research activity focuses on uncovering of inequality causes through social groups. The similar processes are studied in other countries. The largest disparity was identified in Israel (index value - 0,442), the smallest disparity is in Slovenia (makes up 0,277). Now, American experts monitor inequality in Russia in cooperation with Rosatom. Thus, there is a clear understanding of trends occurring in Russian in the last 10 years. It is recognized, the inequality between groups decreases in Russia.

Filip Novokmet, ,Research Fellow of the World Inequality Lab, Paris School of Economics, point out also a trend for income growth in Russia. Experts recorded the growth of national income od Russia by 40%. However, the scientist can not identify the social group that is the main beneficiary of the mentioned tendency.

Filip Novokmet highlighted also the topical issue of comparison of the inequality indices of Russia with China and other ex-communist countries. The general witnessed trend is considerable degradation oh inequality indices across all countries in transition from the socialist system.

The study uncovered weak institutional arrangements as a factor of the accelerated escalation of inequality in Russia in 1990s. For this very reason the recorded indexes were much higher in Russia than in China, Czechia, Poland, Hungary.

Appealing to the complex issue of income inequality,   Maksim Oreshkin, Minister for Economy Development of the Russian Federation, emphasized priority of inequality indexes trends consideration. For instance, in the mid 1990s, the lack of actual income growth was observed in our country. In the same time, the cost of services in education and health care sector has practically tripled. Accordingly, it resulted in human capital development stagnation and caused associated adverse social economical developments.  At the present time, the inequality level in Russia decreases, a positive trend that is not yet corresponds to a favorable ratio between income of social strata.

Avner Offer,  Professor of economical history in Oxford University, introduced another point of view by the example of the USA and Israel. According to him, there are many minorities in these countries regarding identity causing integration difficulties in the present social economic system. In particular, one can see a huge income disparity between Arabs and non-orthodox Jews. There are significant gender features: non-orthodox Jewish women work more, than men of the same group. With that said, men do all possible to prevent parity income for women from this group. This causes the disparities observed.

Natalia Zubarevich, Professor in Moscow Lomonosov University and Senior Research Associate in RANEPA addressed the matter of the regional respect of income inequality. She supposes, the aspect is more important for Russia than demographical one. According to Natalia Zubarevich, “reducing of average income inequality in Russia was achieved due to oil revenue and its redistribution. The inequality began to reduce since state-paid workers’ wage increasing. A gospel truth: as much inequality as much transfers”.

In her speech, the professor raised an important practical and scientific issue: is the easing of intraregional inequality a product of growth or of stagnation?

In conclusion of the discussion, Ruben Enikopolov, Rector of New Economic School, took the floor. He pointed out a lot in common if comparing the USA and Russia regarding inequality before and after transfer taxes payment. The expert witnesses strong potential of social taxing policy for solution of inequality problems. Ruben Enikopolov pointed out: “20% of transfers in Russia is targeted, and the rest is “spread”. The way out is proper transfer targeting. There are no panel studies in tax data. It is bad, such data is essential for understanding”.