HomeNewsNews Dmitry Medvedev, Chairman of the Government of the Russian Federation, spoke at the 10th Gaidar Forum (VIDEO)

Dmitry Medvedev, Chairman of the Government of the Russian Federation, spoke at the 10th Gaidar Forum (VIDEO) 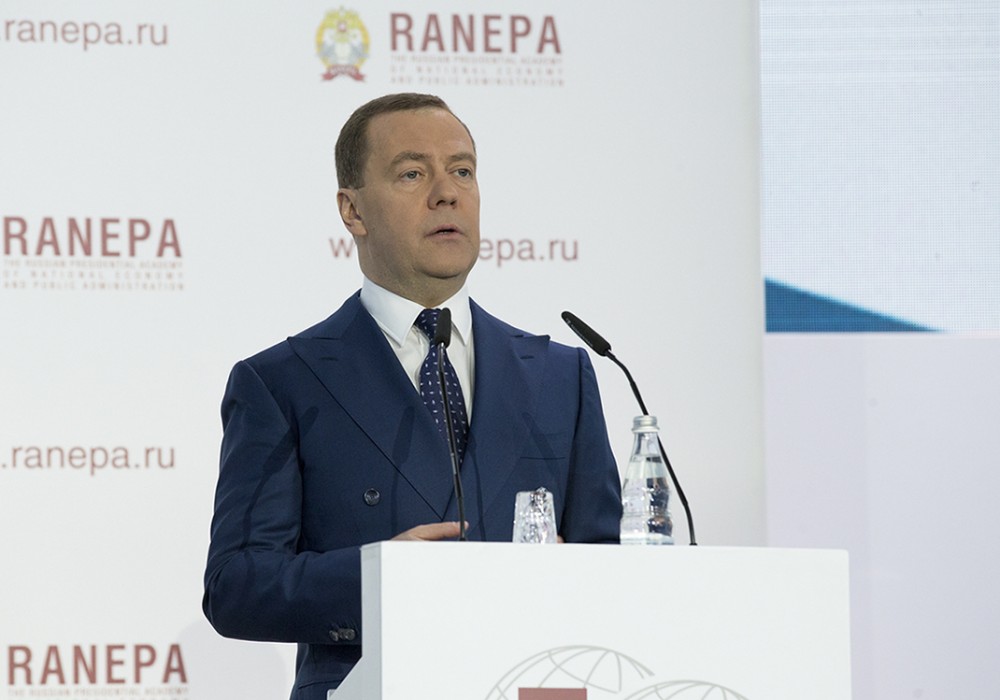 Plenary discussion “National Development Goals and Global Trends” with the participation of Dmitry Medvedev, Chairman of the Government of the Russian Federation, became the central event of the first day of the Gaidar Forum 2019. The speakers discussed key challenges and risks for the global economy in the coming years.

Dmitry Medvedev described the following current challenges: a high level of uncertainty that affects almost all areas of public life, the speed and scale of digital transformation, as well as the global changes in the traditional markets and the emergence of new markets. First of all, we are talking about the structure of the energy market, intensifying competition, growing protectionism, environmental problems, increased social inequality and unfairness in the distribution of benefits from the expansion of international trade, the disproportion between the growing weight of developing countries and their participation in international trade rules determining. Challenges are interconnected and generate new ones, requiring, for example, new levels of international and public security.

Dmitry Medvedev recalled that, on the one hand, the high level of uncertainty in the global economy and national economies was set objectively, and the reason is clear: the speed of technological development, in fact, is the price for technological progress. But, on the other hand, such a high level of uncertainty “is created purposefully. I mean the policy of aggressive political and economic pressure that has recently been adopted by individual countries. From illegal sanctions and trade negotiations from a position of strength to the arrest of foreign top managers, which has never happened before, and the actual prohibition to acquire products from certain countries. Such restrictions apply to various countries and thousands of companies and banks,” said Dmitry Medvedev. “This is an attempt to redraw the entire international trade architecture to own benefit, to control, in fact, the global financial system, using the position of the global emission center while extending national debt to the limit and ultimately shifting a significant part of the internal and economic risks to other players in the global economy."

It was noted that the growing political and currency risks of the dollar zone provoked the EU to discuss a package of measures to expand the use of the euro in strategic projects. Russia began expanding the use of the ruble and other currencies in foreign trade, and seriously reduced its investments in US Treasury bonds. "It is obvious that the trend of reducing the dependence of national economies on the dollar will increase."

The Chairman of the Government also mentioned infrastructure optimization as another global problem. In particular, Russia faces the challenge of reducing the regulatory burden on entrepreneurs, as well as ensuring cybersecurity as part of the country's digitalization process, a radical transformation of the labor market and changes in the social sphere against the background of the massive release of low-skilled workers.

The plenary discussion was moderated by Vladimir Mau, Rector of RANEPA, who emphasized the main challenge for both science and practical politics – managing uncertainty. This thesis was developed by other participants in the plenary session.

In particular, Tarman Shanmugaratnam, Deputy Prime Minister and Coordinator for Economic and Social Policies of Singapore, identified two contradictions in the world order, which create the general uncertainty of global development. “The world has become multi-polar, which means decentralized decision-making, with the global economy and financial markets increasingly interconnected. In addition, national policies and globalization do not go well together, they undermine each other, the response to globalization at the national level is very weak.” To address such paradoxes, the session participant proposed to strengthen the system based on a decentralized approach.

Lucas Papademos, Honorary Governor of the Bank of Greece, Prime Minister of the Hellenic Republic in 2011–2012, noted that the countries of the world are faced with the need to resolve the effects of globalization and rapid technological innovations, demographic migrations, uncertainty due to trade problems, international political interaction. To respond to these challenges, it is necessary, according to the speaker, to avoid trade and other contradictions, to create a common international framework. It is important to counteract income inequality and effectively solve the problem of migration.

“To increase the viability of the euro, we must take action at all levels. We can make additional progress, despite political difficulties in some countries (such as populism and Eurosсepticism), if decisions are implemented at the European level, not at the national levels. We must move to a fiscal union, unify costs and expenses. It is necessary to develop the infrastructure and introduce technological innovations,” said Mr. Papademos.

Giovanni Tria, Minister of Economy and Finance of the Italian Republic, drew attention to the additional risks in Europe caused by the great rejection of globalization, since this process caused the growth of inequality. "The pace of technological change is increasing, but the economy cannot quickly adapt to them," the minister stressed. The second trend of the modern world noted by the speaker is the growing competition for technological hegemony between Asia and the USA, which provokes a real trade war. Mr. Tria is confident that competition should be above the conflict, especially since Europe has not overcome the consequences of the crisis yet when "millions of people are still outside the environment of production."

Frédérique Vidal, Minister of Higher Education, Research and Innovation of the French Republic, pointed out to the lack of qualified personnel, who can adapt to a changing world, as well as the transformation of the entire educational system with the advent of artificial intelligence, among the current risks of international development. The speaker noted the need to introduce a project-based learning method and interdisciplinary education. The combination of humanities and natural science in the digital age plays a special role in responding to global challenges.

Paula Risikko, chairperson of the Finnish Parliament, drew the attention of listeners to the transformation of the international system: “We see more and more confrontation, not cooperation, which leads to the fragmentation of the whole system”; to climate change: “No one can be a looser or a winner in this matter”; and to the demographic crisis, which combines rapid population growth in some countries with its reduction in others. All of this presents major challenges for national economies. According to Ms. Risikko, the mechanisms for solving these problems can be the 2030 Agenda and the Agenda for Sustainable Development, as well as the Paris Agreement on Climate Change. “Solutions should be found through these tools,” the speaker said. Paula Risikko also stressed that within the framework of the global challenge in the area of the correlation of health and economic prosperity, Finland raised the issue to the priority level for all ministries in the country. This means that legally in Finland “all of the country development agencies should consider health care as an aspect of economic development”.

The discussion resulted in the participants agreeing on Dmitry Medvedev's statement that it is necessary to gradually restore the lost confidence, since only within the framework of trust general problems discussed by the panel may become common opportunities.