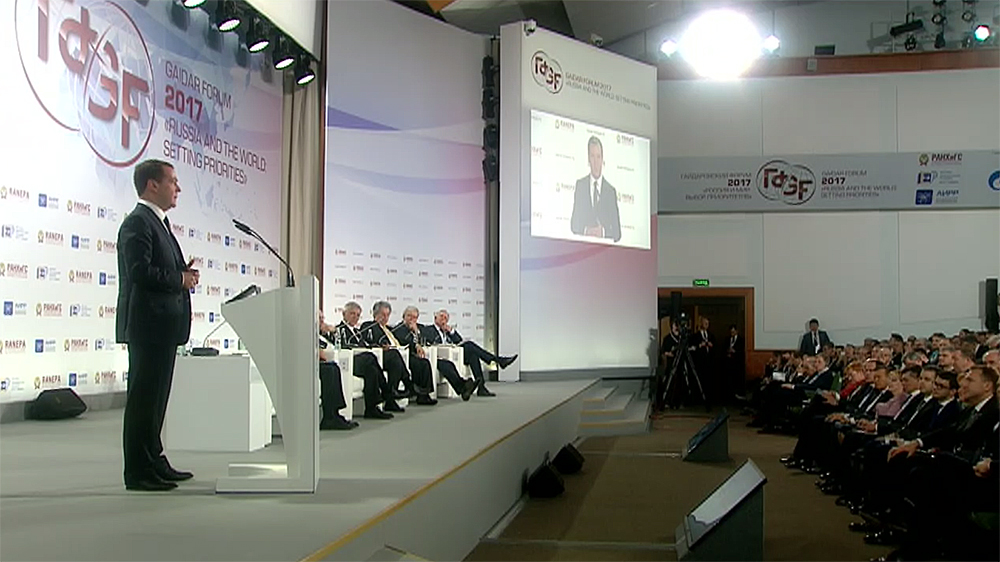 The plenary meeting of the Gaidar Forum 2017, Russia and the World: Setting Priorities, focused on the main risks and drivers of global economic growth in the next few years.

RANEPA Rector Vladimir Mau opened the discussion he was going to moderate. He read Russian President Vladimir Putin's address to the forum participants. “These meetings are always notable for their highly relevant and diverse agenda, important participants and promising ideas,” the message said. “I hope that the suggestions and recommendations that you make will help Russia meet social and economic goals, strengthen international cooperation and overcome common global challenges.” According to Vladimir Mau, the world today is facing a choice of priorities; this agenda is equally relevant for all countries, but the risks and challenges the world community will have to deal with in the next three or five years can be viewed differently.

Prime Minister Dmitry Medvedev spoke at the forum, emphasizing that his speech was not a program of any kind. According to him, economic growth is currently hindered by a lack of investment and “paralysis” of lending, with the risk of a lingering stagnation being a common problem. “It is impossible to restore economic growth through financial injections alone; structural reforms are needed,” the Prime Minister said, adding that this discussion has been on for the last 15 years. According to him, the main risk Russia may face is a technology lag. “The transition to a digital economy will lead to a revision of the government’s role in the economy. It will require a reform of the public administration system, which should become more flexible and compact,” he said, adding that the Government is working on a plan of action to accelerate economic growth, which would boost Russia’s economy to a level above the global average.

Speaking about the immediate prospects, First Deputy Managing Director of the International Monetary Fund David Lipton noted that there is considerable uncertainty associated with both economic and political factors. At the same time, he said, in 2017 the world economy may show growth of 3.4-3.6%, which is higher than last year’s 3.1%. “The most important thing right now is to try to reverse the economic slowdown, a recent trend observed in both emerging and developed economies, including Russia,” he said.

Martin Wolf, Associate Editor and Chief Economics Commentator at The Financial Times, said that the global economy is gradually recovering, but its further development depends largely on the new political environment: “The main issue is whether world order remains basically stable, and whether we have enough open cooperation between countries.” Commenting on one of the most important political decisions of the past year, the Brexit, he said they should not have held the referendum on Britain’s withdrawal from the European Union. “While before that I could describe Britain as a moderately mature and moderately democratic country, I cannot say this now,” the expert said.

The discussion was attended by the former Prime Minister of Poland (2004-2005), president of the National Bank of Poland (2010-2016) Marek Belka, who listed the three fundamental problems of the global economy of the last decade. “The main problems are the structural geographic changes in the world economy: the rise of China, the relative decline of Europe and the United States, which have direct and indirect consequences for the global economy. Also, there is a technological change, particularly in information technology: financial markets operate online, while the other sectors of the economy don’t, which also leads to instability and a slowdown in economic growth that we have seen for ten years.” the politician said.

Former Australian Prime Minister (2007-2010, 2013) Kevin Michael Rudd said there are more risks ahead than growth drivers, adding he was mainly referring to the challenges of foreign relations, in particular between the US and China. Speaking about international cooperation, the expert recalled the G20, which was created for a thorough reform of the economy and helped avoid the escalation of the financial crisis into depression, but failed to ensure a rapid growth of the global economy.

At the same time, the Russian market can be described as healthy, Paul Polman, CEO of Unilever group, said confidently. “We believe that the country is ready for structural changes, is competitive and capable of moving forward and developing. We are observing Russia’s effort to overcome its dependence on commodity exports, and to provide equal opportunities to all sectors of the economy,” Mr. Polman said.