HomeNewsNews Education and economic growth: a strategy for the future (VIDEO)

Education and economic growth: a strategy for the future (VIDEO) 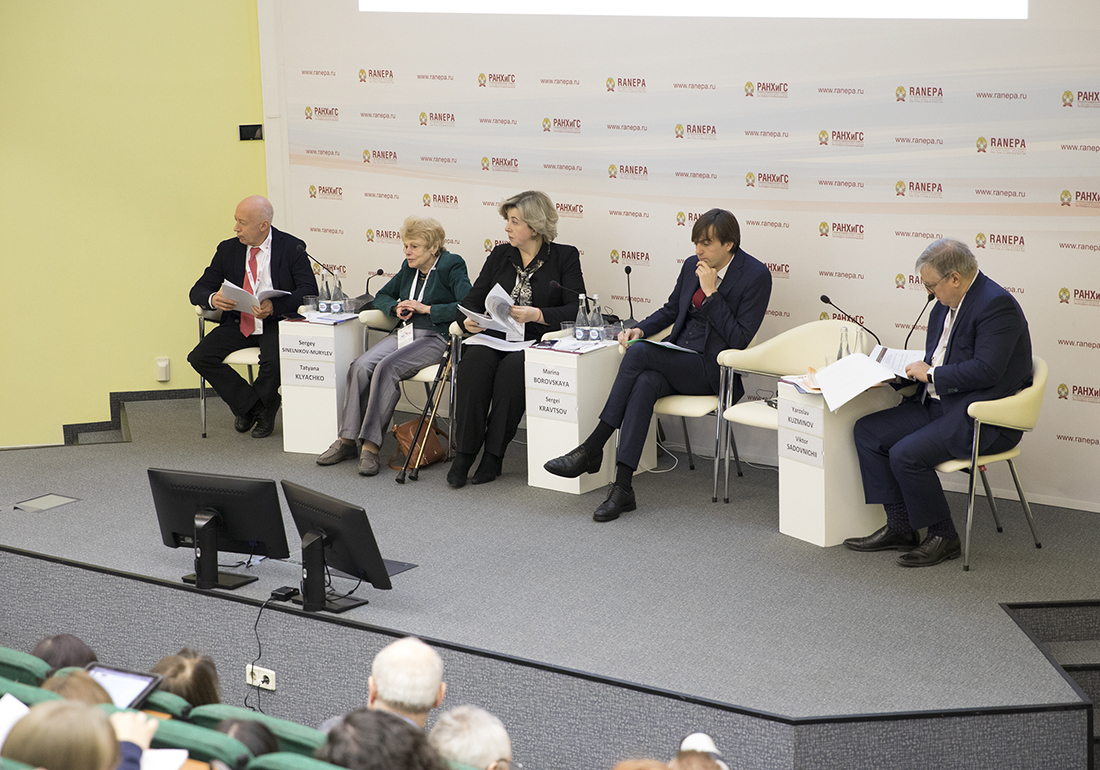 Institutional development of education and the impact of human capital on the economic growth of the country were the key topics of the expert discussion “Education and Economic Growth: A Strategy for the Future” at the 10th Gaidar Forum.

The discussion was moderated by Sergey Sinelnikov-Murylev, Rector, Russian Foreign Trade Academy, who voiced the thesis that “money spent on education is not an expense, it is an investment, an investment in human capital”.

In connection with this thesis, Sergey Sinelnikov-Murylev invited his colleagues to express an expert opinion on the future of education policy and in what way it should be implemented in order to ensure sustainable economic growth.

The tone of the discussion was set by Tatiana Klyachko, Director, the Center of Economy of Continuing Education, RANEPA, who gave a keynote speech. The expert cited data from the study, which conducted a comparative analysis of economic growth models taking into account human capital in developed and developing countries. The following differences are notable: for developing countries, the coverage of the population with secondary education is important, and for developed countries – the size of the class or the number of students per teacher: a decrease in these indicators allows for an increase in the quality of school education.

If, in an effort to achieve economic growth, a developing country begins to import technology, then it is extremely important to increase the number of graduates from universities in engineering specialties, since it is necessary to adapt the imported technologies to local economic realities.  For developed countries, the number and proportion of people employed in the R&D sector, as well as the number of registered patents, is more important, since they allow obtaining innovations that stimulate economic growth.

There are some difficulties in the relations between economic growth and human capital: if you accumulate human capital by increasing the coverage and quality of higher education but there are no economic conditions in the country to realize its potential, then you can get a significant brain drain from a developing country to more developed countries. Thus, the accumulation of human capital must be synchronized with the development of the economy. Meanwhile, in Russia, despite the influx of young people in recent years into the R&D sector, there has been a decline in the number of researchers as compared to other countries. At the same time, an important factor that reduces the efficiency of this sector functioning in Russia is that Russian science lacks middle-aged researchers, who could ensure the entry of young people into science.

Referring to the world experience of increasing human capital, Tatyana Klyachko noted that “the general trend is that higher education is becoming the social norm for the population of almost all countries.” According to statistics, in families where at least one parent has a higher education, the likelihood that children will receive higher education is growing and has reached 70% in recent years.

In Russia, to improve the quality of human capital and economic growth in the field of education, it is necessary to implement a number of institutional reforms: conduct a budget maneuver, improve OGE and USE mechanisms, change the approaches to the distribution of admission control figures, as well as tools for budget financing of universities and their accreditation.

It is important to note that if in the USSR approximately 7.5% of the children enrolled in the first grade reached the university, now this figure is 48%, which is very high. At the same time, over the past 20 years, the share of the 9th grade graduates entering the personnel training programs has decreased from 25% to 11%. There is also a significant imbalance between the benchmarks for admission of applicants to universities on a budgetary and paid basis, as well as between training in various specialties. It is necessary to train more doctors and other medical personnel, as well as expand training in humanitarian areas. In addition, a review of the financing plan is needed: for leading universities, budget financing should be allocated according to estimates, since they should implement unique programs, and for the no-so-high-ranking universities – according to standards, when it comes to variable costs, and according to estimates when it comes to material and technical base maintenance. Leading universities should receive indefinite accreditation, as they have the right to set forth their own standards and set the vector for the development of the higher education system. For universities with a “good” credit history, the accreditation period should be 12 years, for those with “bad” one – 6 years.

According to the expert, institutional changes in the field of education are of interest to the whole society, since everyone is involved in the education system to one degree or another, and human capital and the development of the country depend on the quality of this system’s development.

The expert emphasized that an objective assessment system is needed for all participants in the educational process: from a school student to university rectors, which will make it possible to clearly see the weak points and provide the required assistance to educational organizations.

The need to pay attention to the programs for the development of pre-school education was indicated by Yaroslav Kuzminov, Principal of the National Research University, Higher School of Economics. Despite the fact that Russia has a fairly high education coverage, there are a number of areas where the country is significantly inferior to world leaders. This is the sector of education of children from 3-4 years and adult education. In these areas, it is necessary to urgently introduce new educational programs.

An important aspect, according to Mr. Kuzminov, is the fact that the economy needs workers and their salaries, which means that human capital is working.

Yaroslav Kuzminov noted that, basically, Russia is working for itself, the brain drain is not very big, since our economy is labor-deficient. At the same time, the share of economic failure in Russia is high: 20–25% of workers earn less than the society spends on them.

Kuzminov also pointed out that special attention should be paid to the programs of psychological and pedagogical patronage. In developed countries, these programs play a big role. Despite the large financial contribution and time lags, it is the early development of a child that has the greatest effect on GDP growth.

Vladimir Mau, Rector, RANEPA, asked a sharp question: if education provides the economy with high-level specialists, is the economy capable of accepting such specialists? It is necessary to synchronize the economic opportunities and needs of each region and the development of the higher education system in this region, otherwise it is possible to provoke a leakage of personnel. At the same time, “education, generally speaking, should not ensure economic growth, it is valuable in itself. Education produces a public good, and we should not evaluate it solely from the standpoint of investing in economic growth. Education is a factor in the country's sustainability, a factor in responding to long-term challenges,” commented Vladimir Mau.

The topic of the circulation of scientific personnel was voiced by Vladimir Vasilyev, Rector, the St. Petersburg National Research University of Information Technologies, Mechanics and Optics. The expert explained that “when we talk about innovation and science, the latter knows no boundaries, and it’s normal that scientists move around the world.” Work in different countries, with different scientific schools increases the level of scientific personnel.

According to Marina Borovskaya, First Deputy Minister of Science and Higher Education of the Russian Federation, economic growth roots in strong science, and a strong science roots in strong education. The fundamentals of the education system development are the development of the individual and his well-being, as well as the formation and strengthening by universities of their own infrastructure.

Andras Horvai, Country Director and Resident Representative of the World Bank for the Russian Federation, Europe and Central Asia, introduced the panelists to the results of their work on building of human capital index. Russia ranks 34th in the world by this index, and the 9th by education, taking into account its quality. Horvai stressed that the number of years of study is not identical to getting a good education, therefore, according to the assessment of human capital, it is necessary to take into account the quality of educational programs.

Summing up the discussion, Sergey Sinelnikov-Murylev thanked all the participants for a multifaceted and very informative consideration of the education connection to human capital and the acceleration of economic growth.