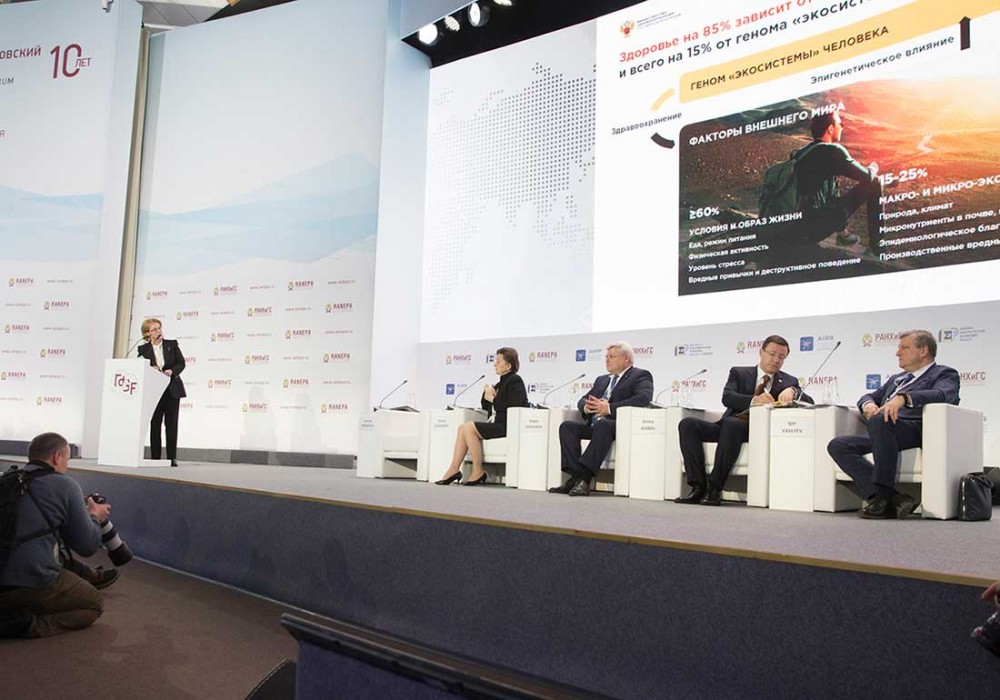 On January 15, as part of the Jubilee X Gaydar Forum “Russia and the World:  National Development Goals and Global Trends”, a panel discussion “85 Projections of the National Healthcare Projects” with Minister of Health Veronika Skvortsova, Governor of the Kirov Region Igor Vasilyev, Governor of the Samara region Dmitry Azarov, Governor of the Tomsk region Sergey Zhvachkin, and Natalya Komarova, Head of the Khanty-Mansi Autonomous District – Yugra.

Veronika Skvortsova, Minister of Health of Russia, was a key speaker at the session. The main point of her report was the development of national healthcare projects in 85 federal entities of the Russian Federation. Programs and indicators for them will be established by regions independently based on unified principles of the state program with regard to demographic, geographic and other features of a region.

“Genome determines the state of health for 15% only. The rest 85% depends on external factors that affects our genome through epigenetic mechanisms. People’s health is determined by manageable behavioral risk factors for over 60%,” she said.

Based on these data, the Minister explained that the human only can exert the maximum influence on his or her health. Moreover, the paradigm of the today’s healthcare consists in the transition from the passive way of life to the proactive society. For this purpose the modern healthcare adjusts the public information system as well as forms motivations to lead a healthy lifestyle. Such trends are combined in the National Healthcare Project.

Veronika Skvortsova also noted that health preservation and preventive measures are minimum. Promotion of healthy lifestyles, regular screenings and measures taken for early disease detection, vaccination and dispensary observation make up only 12% of the total healthcare budget in Russia. The rest 88% of the healthcare budget are spent for treating already existing diseases.

One of the main areas of national healthcare project implementation is territorial planning based on the unified electronic geoinformational system.

“We should integrate the digital loop of regional segments into centralized healthcare systems based on the unified informational service: centralized dispatch stations of ambulance and air medical services on a single phone number, centralized image archives, centralized laboratory data archives and a plenty of other facilities,” she noted.

The Minister clearly emphasized the importance of medical export which provides additional resources to the Russian healthcare system. According to statistics, medical exports in Russia has grown by 15 times since 2016.

The panel discussion with the Minister involved heads of regions having a breakthrough experience in healthcare matters and showing positive trends in solving such issues. They include the governors of Kirov, Samara regions and the Khanty-Mansi Autonomous District - Yugra.

Natalya Komarova, Head of the Khanty-Mansi Autonomous District - Yugra, share her experience of first aid provision in problematic regions, remote settlements, as well as in the areas of compact settlement of northern indigenous peoples.

The Head of Yugra told about access to medical institutions for people living in the region. “We found an alternative to stand-alone outpatient departments – we purchase a room in residential buildings and place medical institutions there. 300 thousand persons are registered in such alternative facilities as of January 1, 2019. We could not provide such a number of persons with access to outpatient departments at their places of residences in such a short time,” noted Natalya Komarova.

Moreover, she actively supports areas of activity aimed at increasing medical service exports and paid special attention to new fields: marketing services, linguistic skills that “should be mastered” as the Head of Yugra said.

Sergey Zhvachkin, Governor of the Tomsk region, spoke about their regional experience of implementing a unified informational center, about telehealth and air medical services.

The Heads of Yugra and the Tomsk region proposed the Minister of Health to hold a panel session on using digital economy to improve the export potential of medical services at the international IT forum held annually in Yugra and Tomsk on a rotation basis.

Igor Vasilyev, Governor of the Kirov region, told about the level of medical digitization of the region and a functioning processing center of the unified regional medical information system (MIS). “All state medical institutions are connected to the MIS. An electronic medical record functions as part of the system, and patients having the right to receive subsidized medicines are recorded. Information technologies are used in the ambulance service operation: all teams are equipped with telecardiographs with automated cloud ECG processing enabling doctors to see its automatic interpretation at once. It is planned to introduce this system in offices of general practitioners as well in 2019,” he said.

According to Dmitry Azarov, Governor of the Samara region, initial key priorities for the Samara region were access to medical service for people and creating additional tools to influence and monitor the demographic situation in the region.

Andrey Kapring, Director General of the Federal State Budgetary Institution National Medical Research Radiological Center of the Ministry of Health of the Russian Federation, noted the effectiveness of screening programs and emphasized the need to expand capacities of further research and increasing the number of doctors. “The growth of population in geometry progression will lead to higher disease rate. According to preliminary estimates, the number of cancer-stricken persons will make up nearly 24 million”, said Kaprin.

Evgeny Shlyakhto, Director General of Almazov National Medical Research Centre of the Ministry of Health of the Russian Federation, highlighted the strong side of the federal part of the project. According to him, with this model the risk of wrong decisions is minimized, and the level of informational support, analytical and descriptive data is critical at an initial stage of creating a unified closed digital loop.

Vadim Vlasov, President of the Novartis Group of Companies, Regional Director for Eastern and Central Europe and CIS countries, noted a socially-oriented policy of corporate programs, told about division of objectives and tasks as well as about active participation of Novartis in the implementation of the oncology healthcare program.

In the end of the panel session, the Minister of Health noted that vectors of further development already become clear. “We will see the transition from the three-level healthcare architecture to the unified digital system focused on the interests and needs of each person. While our past is connected with disease treatment, our future is aimed at constant health monitoring,” Skvortsova declared. She added that this approach will contribute to a higher life sinusoid and forwarding medicine development.