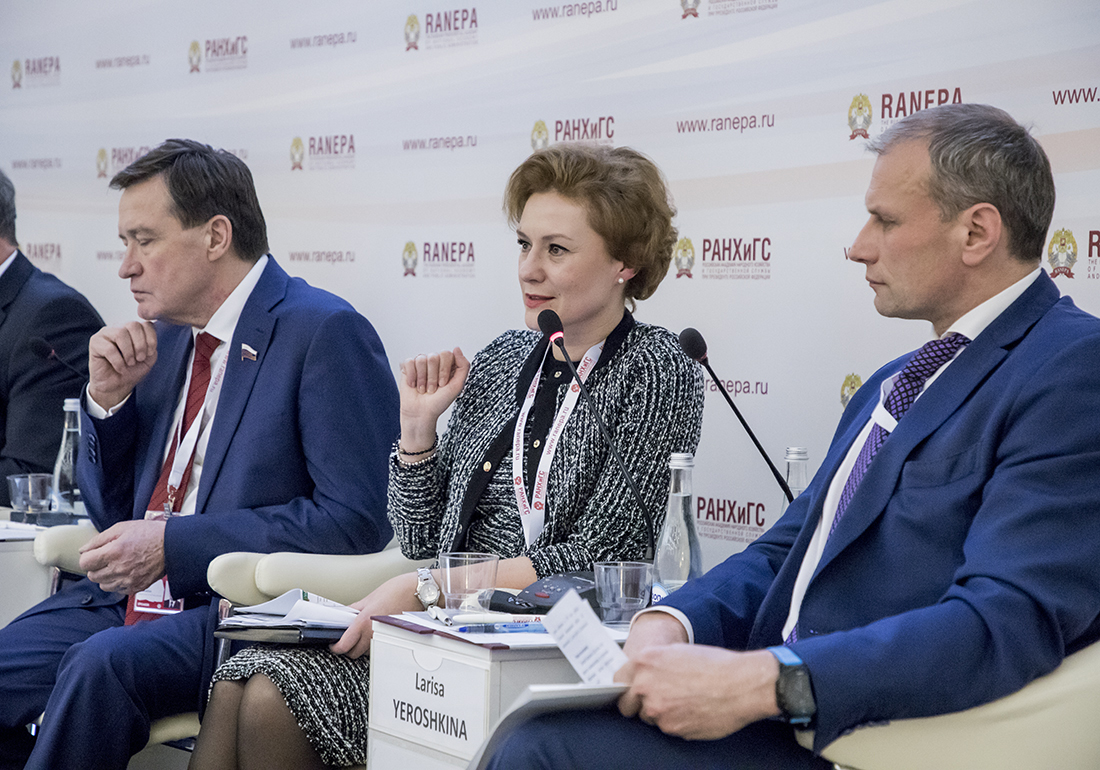 On January 16, an expert discussion “Financial participation of regions in national development goals achieving” was held within the frames of the anniversary Gaidar Forum. In the course of the debates, the different forms of budgeting or regions, issues of jurisdiction delineation between federal center and regions were discussed. The panel comprised the following prime participants: Igor Orlov, Governor of Arkhangelsk Region, Sergey Ryabukhin, Chairman of the Budget and Finance Markets Committee of the Federation Council, Yuri Roslyak, Auditor, the Accounts Chamber of the Russian Federation, Larisa Yeroshkina, Director of the Department for Inter-Budget Relations of the Finance Ministry of the Russian Federation, Dmitriy Svatkovskiy, Member of the Budget and Taxation Committee of the Russian Federation State Duma. Vladimir Klimanov, Head of the Department for State Economic Regulation of RANEPA, appeared as discussion moderator.

Sergey Ryabukhin, Chairman of the Budget and Financial Markets Committee of the Federation Council, started the discussion. The speaker called attention to budget balance as a main issue of the discussion matter. In his mind, the main budget targets should by analyzed according to regional tasks and programs not only in terms of branches, but also of the regional, federal, and other principal levels.

The issue, quite how does the Ministry of Finance of the RF help to implement the  national development goals, gains in importance. Larisa Yeroshkina, Director of the Inter-Budget Relations Department of the Ministry of Finance of the Russian Federation, explained some practical issues. Since 2007, the budget are being implemented with net surplus, i.e. with proficit. Whereas it made up 50 billion rubles in 2007, in was 500 billion rubles in 2017. In the figures,an average parameter of consolidated amount is given. Excluding such regions as Moscow, Saint Petersburg, Tyumen region, Khanty-Mansi Autonomous Okrug, and Yamal-Nenets Autonomous Okrug the surplus amounts 300 billion rubles.

Since 2017, the national debt is in decreasing phase. Payments convenience in important for regions. Larisa Yeroshkina called attention to possibility to extend credit payment period to budget for regions where income growth exceeded inflation rate. In the speaker’s mind, the Federation subjects are able now to manage their debt.  The number of inter-budget transfers to budgets in 2019 and beyond is noteworthy. As a whole, 188 destinations are allocated, 78 of them are in connection with national development projects.

Igor Orlov, Governor of Arkhangelsk Region, emphasized the importance of agreements issue.  Confidence and certainty at all levels of executors are indispensable elements in every problem situation resolving.

Arctic regions are special and unique in terms of approaches and KPI evaluation. The ratio of quality roads provision in Arkhangelsk is 14%. According to President’s decrees, this index should make up at least 50%. Igor Orlov pointed out, that even a special calculation method do not allow to increase it over 32%, but it is not enough.  I.e., an individual approach are necessary, as previously said.

As Dmitriy Svatkovskiy, a Member of the Budget and Taxation Committee of the Russian Federation State Duma, did observe, the budget generation and starting of national development projects is an important thing. At the moment, the budget is adopted, and all regions understand the line of work. Regarding challenges, the model budgets are noteworthy.  The method is very complicated, and it requires investigation. An important facet of the method is the stop of  governors’ pilgrimage across chambers in begging for subventions. The main reason is the decision authority. It is impossible to estimate costs of the decision authority at he federal, regional, communal, and other levels. It is a hanged issue requiring resolving. Projects management structure in the best solution with regard to the budget adoption and funding of any projects. There are 85 regions and 85 different ways, but their target- a person - is common. The valuation will be in the format: “done” or “failed”. According to the promise of Mr. Svatkovskiy, the issue will be under control of the Parliament.

Aleksandr Deryugin, Senior Research Fellow of The Gaidar Institute for Economic Policy, pointed out, the average oil prices increased in 2017, and the Ruble was devalued afterwards. Accordingly, the income and budgets have diverged in all levels both the federal one and regional levels. The similar situation next year is unlikely, so, the income growth in regions is not foreseen.  More likely, the income in regions will be marked nominally. All problems discussed in 2015-2017 will turn in 2019 again.

A new period started in 2012, when the transition to Management by Objectives Method foe development management was performed. Many changes took place, but the technique of inter-budgetary transfer remain the same, and the approaches were not changed fundamentally.  Regions have to pay attention to obligatory and inevitable expenditures. One should evaluate both direct expenditures and aggregate expenditures for achieving of goals. Such expenditures are not subject to adjustment according to the method, and they are typical for definition of every subject territory. In the words of Yuri Roslyak, the budget is to be calculated according to projects-oriented management method.

All discussion participants came into line with the necessity of the individual approach to budgeting issues and responsibility for budget implementation and noted success in bilateral and comprehensive action of the federal and regional level authorities providing  an outlook with fair promise.