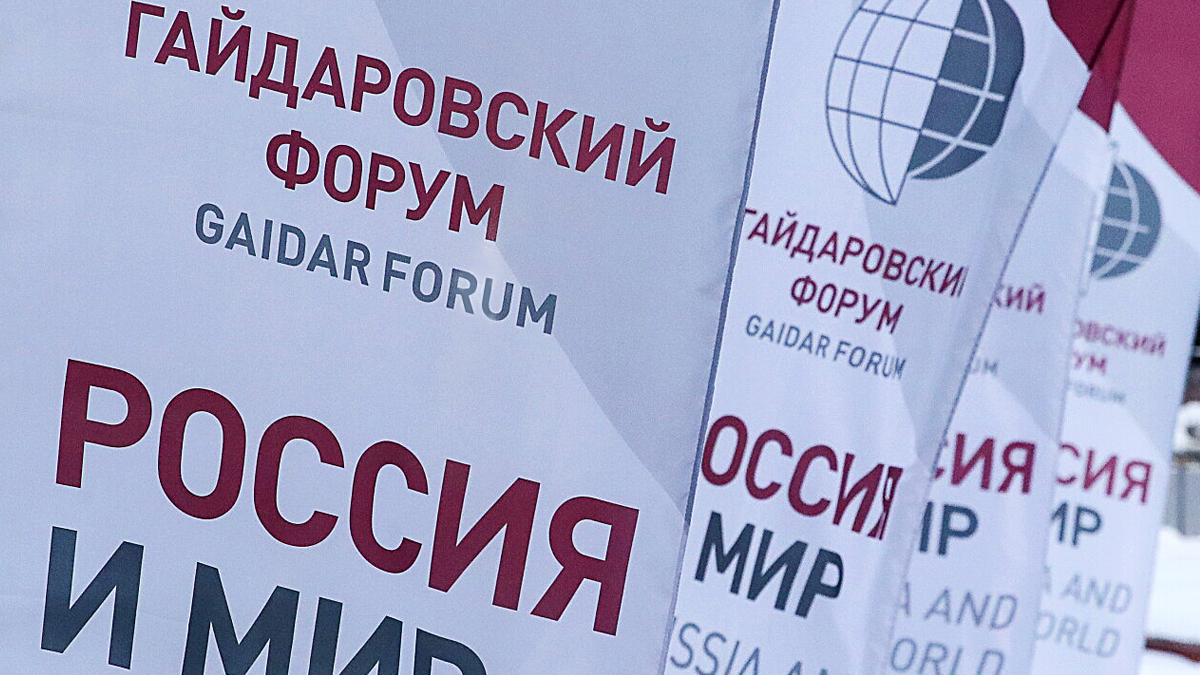 The 2022 Gaidar Forum, themed Russia and the World: Priorities, wrapped up on January 14. The forum, hosted by the Russian Presidential Academy of National Economy and Public Administration (RANEPA) and supported by the Government of the Russian Federation, brought together representatives from public authorities and academia, as well as senior executives with Russian and international businesses. The Forum program focused on the Russian Government’s priority initiatives to promote the country’s socioeconomic development.

In just two days, more than 300 experts spoke at over 80 events. As before, the Gaidar Forum was one of the most significant business events of the year and opened the public discussion on the most pressing topics of our time, including healthcare, medium-term priorities of Russia's social development strategy, the country's macroeconomic policy, education, the tax system, digital transformation and others.

“The world has been going through a period of high turbulence the last 10 to 12 years, with crises succeeding one another and sometimes overlapping – economic, structural, geopolitical crises and the pandemic,” Vladimir Mau said. “Trends change very quickly. Whereas in previous decades, most countries struggled with deflation, trying to think of ways to accelerate economic growth by raising inflation, now, after a long break, the world has entered an inflationary period. It seems like in recent years, economists and politicians have rather focused on the crises than on a positive agenda. They were busier with how to respond than with what to do. Today, developed countries – and Russia is one of them – are facing very similar socioeconomic challenges. It’s time to discuss a positive agenda, starting from the challenges that Russia and the world are facing.”

Eco-friendly agenda as a driver of economic development

The green agenda, which was extensively discussed during the first day of the forum, was also highlighted at a session on the future of Russia's green strategy. Minister of Economic Development Maxim Reshetnikov, Adviser to the President, Special Presidential Representative on Climate Issues Ruslan Edelgeriyev and Head of the Federal Service for Supervision of Natural Resources Svetlana Radionova spoke at length on this topic, pointing out the need to develop a unified plan for adaptation to climate change. Maxim Reshetnikov highlighted two major goals of Russia’s green strategy. The first is to fulfill our obligations under the Paris Agreement and achieve carbon neutrality by 2060. The second goal is to protect domestic businesses as they are struggling to achieve the first one.

Environmental issues were the main subject discussed at the session on Circular Economy: Making Money out of Garbage. Deputy Prime Minister Viktoria Abramchenko, CEO of Russian Environmental Operator Denis Butsayev, Chairman of Sibur Holding Dmitry Konov, and CEO of Coca-Cola HBC Russia Aleksandar Ruzevic discussed the development of a circular economy and a recycling market. According to Viktoria Abramchenko, mineral extraction waste should become a secondary material resource through the use of appropriate technologies.

The impact of the pandemic on business, development of new management models

Oleg Belozerov, CEO and Chairman of the Board of Russian Railways, First Deputy State Duma Speaker Alexander Zhukov and Alexander Ivlev, CIS Managing Partner at EY, discussed the transformation of modern management models, the development of human capital and the government and businesses’ priorities at the session, The Man at the Center of Everything: New Management Model. During the discussion, Alexander Ivlev presented findings from an EY study, which showed that personnel management and corporate culture are at the forefront for a leader in the modern world. Oleg Belozerov also emphasized the importance of the team: “As a major employer, we at RZD want every employee to feel that they matter to the company. We are interested in making their expectations fully met, in terms of career growth, being protected, having opportunities for personal development, as well as with regard to their families and their environment.”

The pandemic has changed society and created the new normal, and that has definitely affected consumer demand. Director of Ozon Sergey Belyakov, economic observer, director of the SberData lab Nikolay Korzhenevsky, and CEO of KFC Russia and CIS Raisa Polyakova spoke about the key changes at the session. As Nikolay Korzhenevsky noted, consumer demand has indeed changed its structure: people now consume fewer services, while demand for retail goods has grown, mainly in the non-food segment. One of the main trends in consumption has been the increasing role of delivery. The ready-made food segment is expected to grow by 15-20%. Raisa Polyakova believes the delivery market needs to be further developed as a new business model. Continuing the discussion, Sergey Belyakov spoke about a new consumer reality, which involves saving time/money while benefiting from high quality of goods.

Effective development of expertise in Russia

On the second day of the forum, RANEPA Rector Vladimir Mau, Academic Supervisor at National Research University Higher School of Economics Yaroslav Kuzminov, President of the Kurchatov Institute National Research Center Mikhail Kovalchuk, President of the Russian Union of Industrialists and Entrepreneurs (RSPP) Alexander Shokhin and President and Chairman of the Board of Rostelecom Mikhail Oseyevsky discussed changes in the government’s reliance on expert advice in Russia since the early 2000s, as well as the role of the new Government Expert Council members.

“The role of expert policy advice has been changing over several periods in Russia. In the 1990s, policymakers’ priority was to explore the huge layer of international experience that had never fit with the Soviet economy’s goals. An understanding that high-quality policy advice is of the essence is a very important achievement of the last 30 years: experts are now working with the Government, and Government employees, including the leaders, periodically do expert work. Today, experts’ job primarily involves analyzing and identifying options, risks, opportunities, and alternatives. However, it is important that an expert does not think of themselves as a politician. An expert does not tell a minister what to do: heads of government bodies have a totally different level of responsibility to society. The role of an expert is not to impose their point of view, but to explain all the options and the possible risks each of them carries,” Vladimir Mau said.

Mikhail Kovalchuk added that the purpose of expert work at the state level is to evaluate large socially significant projects important for national security and defense; the number of such project is growing with every year.

Gaidar Forum experts have had several discussions concerning the Russian tax system. In recent years, Russia’s Federal Tax Service (FTS) has become a world leader in the implementation and use of digital technologies among government agencies. Head of the Federal Tax Service Daniil Yegorov and founder and director of 1C Boris Nuraliyev spoke at length about the progress of digitalization of tax administration. Rector of the Russian Foreign Trade Academy Sergey Sinelnikov-Murylev moderated the discussion. Daniil Yegorov underlined the tax regulator’s current strategy: it is trying to be invisible, convenient and predictable, and to build trust in the tax administration mechanisms.

The discussion of the tax system continued during the session on Tax System: Priorities. The head of the Federal Tax Service participated in a debate with State Secretary, Deputy Minister of Finance Alexey Sazanov and Chairman of the State Duma Budget and Tax Committee Andrey Makarov, and shared the department's immediate plans.

The finals of Digital Summit 2021, the first national IT development award, took place during the second day of the forum. The best contestants presented their projects in 12 categories.

On the same day, Gaidar Forum experts discussed the role of the media in creating a new image of business and education, theaters going digital, the quality of government data, the competencies and qualities future civil servants will need, gender equality, availability of public services, EdTech cooperation between private and public schools, human capital development and many other topics.

The Gaidar Forum is organized by RANEPA, the Gaidar Institute for Economic Policy and the Association of Innovative Regions of Russia, and supported by the Government of the Russian Federation.