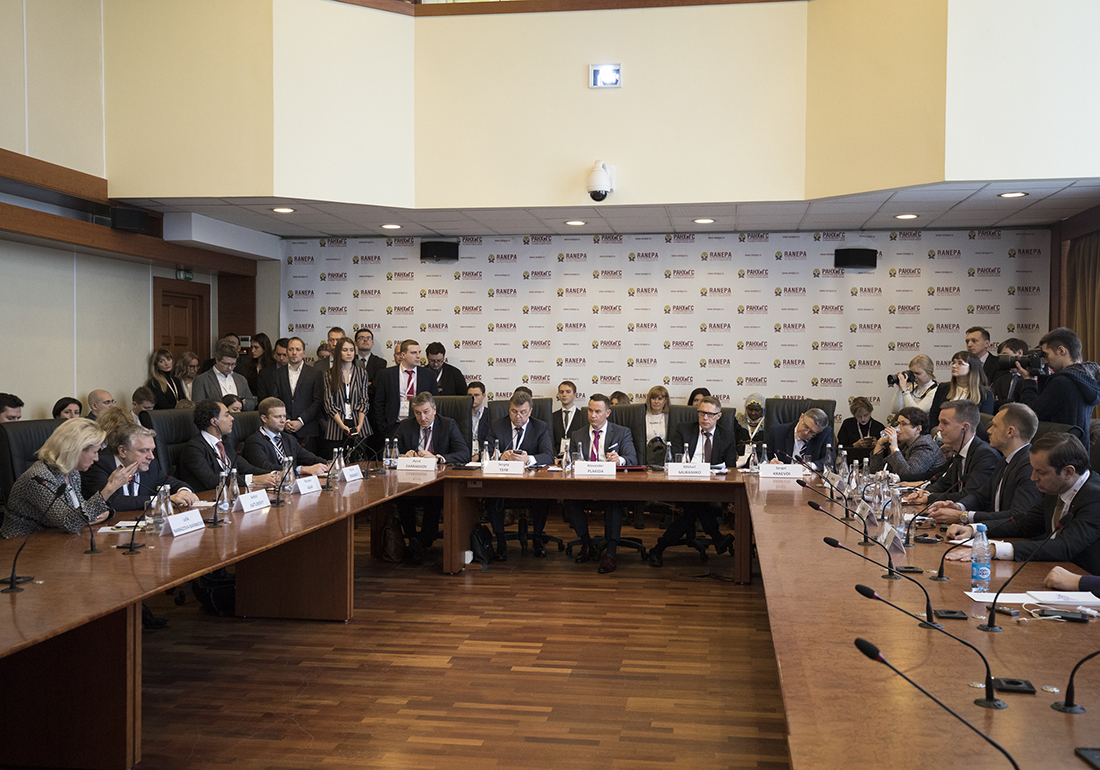 January 16, on the second day of the 10th Gaidar Forum, during the expert discussion, business, government and expert community representatives identified the main factors and prospects for the development of the national vaccination calendar, which is an proactive tool in ensuring the national and biological security of the country.

The expert discussion was moderated by Alexander Plakida, Executive Director, the Effective Health Care platform; Managing Partner, Alliance Consulting He outlined the key issues of discussion: the decision-making procedure for the development of the national preventive vaccination calendar (NPVC), the choice of the optimal model of production and procurement of immunobiological preparations, as well as the challenges associated with the implementation of the NPVC, including increased immunization coverage, timely and full notification of the population of the capabilities of preventive vaccination.

The first part of the open dialogue was devoted to finding solutions for the NPVC improvement.

The position of the Ministry of Health of Russia was presented by the Deputy Minister of Health of the Russian Federation Sergei Kraevoi. He noted that maintaining the current high level of immunization and its further development can be achieved by improving the NPVC. “The main criteria for an infectious disease inclusion in the NPVC are the epidemiological situation, as well as economic and medico-social significance. In turn, vaccines used in the framework of the NPVC must meet the following mandatory requirements: safety, efficiency, and feasibility.” In his speech, Sergei Kraevoi indicated that about 18 billion rubles would be allocated for the NPVC financing. At the same time, there is the task of the NPVC expanding through introduction of varicella vaccines, rotavirus vaccines, hemophilia vaccines for all children, and pneumococcal vaccines for children from 2 to 5 years old, followed by expansion of indications for this vaccination at an older age.

Discussion of the issue was continued by Leyla Namazova-Baranova, Chairman of the Executive Committee of the Union of Pediatricians of Russia. The speaker was asked to consider the possibility of including human papillomavirus (HPV) in the NPVC in order to reduce epidemiological risks: “Cervical cancer, like other cancers caused by the human papillomavirus (HPV), can be easily prevented by vaccination, the efficiency and safety of which are close to 100%. A delay of such a decision even for 3-4 years will lead to the death of several tens of thousands of Russians, both male and female, from oncological diseases. It is necessary to take a strategic decision on the inclusion of HPV in the NPCP of Russia, so that manufacturers could start the production cycle, and our fellow citizens have a chance to escape from HPV-associated cancers.” Leyla Namazova-Baranova also outlined the factors that need to be taken into account during the development of the preventive vaccination system in the Russian Federation: the presence of an independent expert council for the epidemiological situation monitoring, prioritization and long-term planning (since the manufacturing of vaccines is a capital-intensive and lengthy process), public confidence in vaccination, clear coordination of actions on issues of supply, consideration of ethnic peculiarities, as well as ensuring the efficiency and safety of vaccination.

Patrick Bergstedt, vice president for global marketing, MSD, noted that the health of the population today is largely a result of activity of previous generations, who have vaccinated their children and created a high level of collective immunization. According to Patrick Bergstedt, the Ministry of Health of the Russian Federation today implements important measures for the development of the NPVC, and in this context it is critical that each dose of vaccine fulfill its purpose, protecting the life of a child, adolescent, or adult. For this, according to the expert, it is necessary to raise awareness and level of education,and this work should be carried out jointly by government agencies, medical and educational institutions, as well as the business community using modern digital technologies. Thus, as an instrument of such work, an electronic immunization calendar for parents can be offered in order to inform them about the schedule of vaccination, epidemiological indications, and the drugs used.

In continuation of the discussion, the participants considered the possibilities of immunobiological preparations production and procurement for the provision of the NPVC.

The position of the Ministry of Industry and Trade of Russia was outlined by Sergey Tsyb, First Deputy Minister of Industry and Trade of the Russian Federation. The speaker noted that, taking into account the implementation of the localization program, today more than 50% of vaccines within the framework of the NPVC are produced in the country, and in the future the share of domestic production is planned to be increased. According to Sergey Tsyb, preventive medicine is a science-intensive industry, which necessitates the close communication of the scientific community and business for scientific research and clinical trials of drugs. To support the development of this cooperation, the Ministry of Industry and Trade of the Russian Federation provides significant assistance in the implementation of projects aimed at carrying out research and development using public-private partnership opportunities.

Guillaume Oshalter, general manager of Sanofi Pasteur in Russia and Belarus, continued the discussion on production and provision of vaccines. The speaker pointed out that the technological transfer of immunobiological preparations is a long and complex process, which can take up to 10–15 years, and also requires a large amount of investments. Guillaume Oshalter stressed that when deciding on the development of the NPVC, it is necessary to take into account the duration of the vaccines production cycle. In this regard, the state should plan ahead for vaccine requirements, which, in turn, will allow manufacturers to plan production volumes and ensure timely deliveries.

Anton Katlinsky, Advisor to the General Director of Natsimbio JSC, spoke on behalf of the Russian business. The speaker pointed out that “the production cycle of prophylactic drugs used in vaccine prevention is much longer than the production cycles of other drugs produced on a chemical basis.” According to the research, “the market demand for vaccines exceeds the production capacity many-fold; therefore, manufacturers need to plan production capacity with a margin to be able to use them in a critical situation in the event of epidemiological risks.”

President of Nanolek LLC Vladimir Khristenko in his speech drew attention to the need to list the vaccines planned for inclusion in the NCPP in the regulatory acts for the implementation of the domestic business task of their local production ensuring. According to the expert, taking into account the long-term planning, it is necessary to work out the format of long-term contracts, since they allow predicting business activities and eliminating the risks of lack of vaccines when they are urgently needed.

In the final part of the discussion, questions were raised regarding the quality control system, the regulatory framework improving, the development of digitalization, and the quality of the public informing about the medical and social significance of the NPVC to reduce the impact of the anti-vaccination lobby.

Mikhail Murashko, Head of the Federal Service for the Supervision of Healthcare, noted that the level of the existing quality control system for drugs used in the vaccination process is high and it complies with international requirements.

Airat Farrakhov, a deputy of the State Duma of the Federal Assembly of the Russian Federation, noted that the NPVC is the most important working tool for improvement of the health of the population and life expectancy. At the same time, the possibility of considering the development of a regulatory framework was identified, taking into account the identification of measures aimed at reduction of the anti-vaccination lobby impact on society through the media, and the introduction of a long-term planning mechanism in order to increase the efficiency of government and business interaction in providing population with immunobiological preparations.