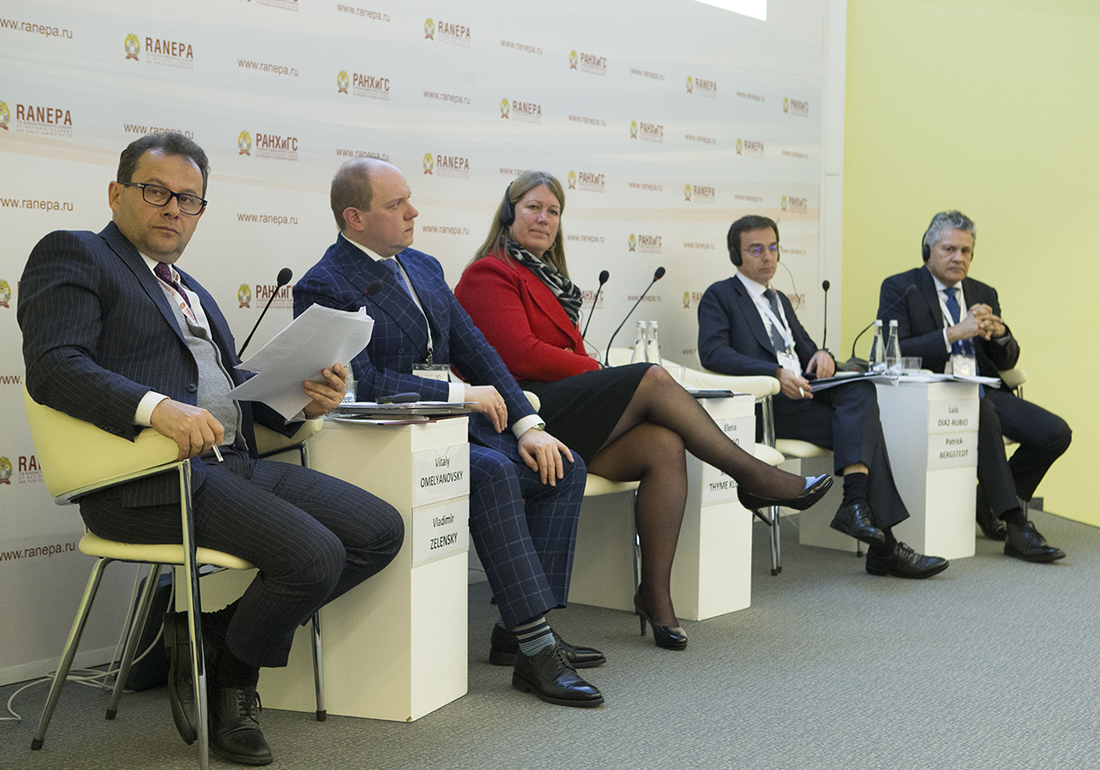 The implementation of digital technologies in the health care system is in full swing. Various medical devices, special health sensors, electronic medical records — all this is already available and is effectively used by both doctors and patients. However, the main problem highlighted at the discussion was the creation of a unified information system in the field of health, as well as its implementation as a universal practice.

Vitaly Omelyanovsky, Director General of the Center of Healthcare Expert Evaluation and Quality Control of the Ministry of Health of the Russian Federation, who acted as Moderator, began with the discussion of “predictions”of Ray Kurzweil, technological futurist and Technical Director of Google. The author, in his assumptions, talks about the future results of digital health care, beginning from today and ending in 2040. For example, Ray Kurzweil suggests that, by 2040, there will appear special gadgets with search engines that will be implanted in the human body.

The Moderator of the discussion stressed that now the state pays great attention to figures and health care. He drew the audience’s attention to more significant numbers: by 2019, more than 300 thousand mobile applications were registered; companies engaged in the development and creation of mobile applications got investments for about three billion dollars in H1 2017; 72% of doctors regularly use mobile phones to receive various information.
“Diagnosis is the use of a software to identify some problems,” Vitaly Omelyanovsky said. He also reminded that there were several applications that were actively used by people: calculator of drugs, syringe pens and inhalers. “They increase the patient’s adherence to treatment,” the FSBI Director General says.

“The problem of digital health, or rather, the introduction of information technologies in medicine, is not only a problem of the state, but also of all participants who have relation to medicine,” Vitaly Omelyanovsky stressed.

Vladimir Zelensky, Director of the Moscow city Compulsory Health Insurance Fund, drew attention to an issue which is a key one, in his opinion: what exactly is required by a person and the system as a whole. He noted that all medical information should be adapted to the patient, the whole system should be adjusted to the people, as, unfortunately, “sometimes a doctor can lose out to doctor Google”.

All participants of the discussion confirmed that the main thing in the field of health care is the exchange of information. “The whole system should have structured data,” Vladimir Zelensky says. He added that, in order to obtain these data, a way should be found to provide these data in a single system image. And, among other things, the clinics, according to Zelensky, should understand the need to implement this system, and we should not force them to work in a certain pre-defined mode. Vladimir Zelensky believes that, because of coercion, the information provided may be unreliable.

Nowadays, compulsory health insurance provides 95% of all medical care. The head of the CHI noted that, in 2015, the Fund provided all insured persons with access to data on medical care provided (“Pandora”), which contained the information on the cost of medical services provided. Vladimir Zelensky drew attention to the fact that this data website is quite popular and in demand among customers. In addition, to improve the health care system, a special safe messenger was created, which gives patients the opportunity to interact with doctors free of charge, communicate with them directly, and remind and prompt pregnant patients on a standardized plan for pregnancy.

When asked about the immediate prospects, Vladimir Zelensky answered that the main tasks of the Fund now are to establish methods of result-oriented payment for medical care, to create recommendations for effective management of patients based on actual data and to assess individual risks for chronic patients.

Evgeny Shlyakhto, General Director of FSBI NMIC named after V.A. Almazov, Russian Ministry of Health, said that the digitization does not always affect the improvement of the result. In his report, he noted the value of personal contact between the patient and the doctor, which, unfortunately, disappears in our world, with the development of technology, as well as the lack of real training and material resources for the introduction of technology.

The effectiveness of digitization, according to Evgeny Shlyakhto, is in the ability to account for all types of services and evaluate their results, in benchmarking of medical institutions not by the number of patients and services, but by the result. The Director General thinks that the list of parties interested in investing in digital health includes both the state and insurance companies, and also business, as well as IT-companies that are closely related to the health care sector.
Maxim Kuznetsov, CEO of Philips Russia, Belarus, Transcaucasia and Central Asia, presented the results of the research “Health Index of the Future”. The CEO pointed out that, in 2018, only 12% of health workers considered the current system as an integrated one. The speaker stressed that Russia has much to strive for, as about 30% of health workers in Europe are of the same opinion. At the same time, 85% of respondents believe that integration will help to improve the quality of services provided. According to Maxim Kuznetsov, over the past few years, important decisions have been made for the development of health care at the state level. One of these decisions is the launching of the Federal project “Creation of a Single Digital Circuit in Health Care on the Basis of Uniform State Health Information System”.

In the period until 2024, the focus and resources of the state should be directed to the creation of basic e-healthcare infrastructure. However, Maxim Kuznetsov believes that now it is necessary to involve business to introduce innovative technologies in digital medicine. This may include telemedicine solutions, such as smartphone ultrasound and remote diagnostics. The General Director is sure that, thanks to this, the state will receive not only the transfer of proven world technologies, but also the reduction of the financial burden and increase of efficiency.

Summing up the results of the discussion, the Moderator concluded that databases and statistical forms are part of a potential system that will include all these features. “However, it is very difficult to qualify all this so far. I hope we will soon witness the occurrence of new solutions in this field,” Vitaly Omelyanovsky said, concluding the discussion.