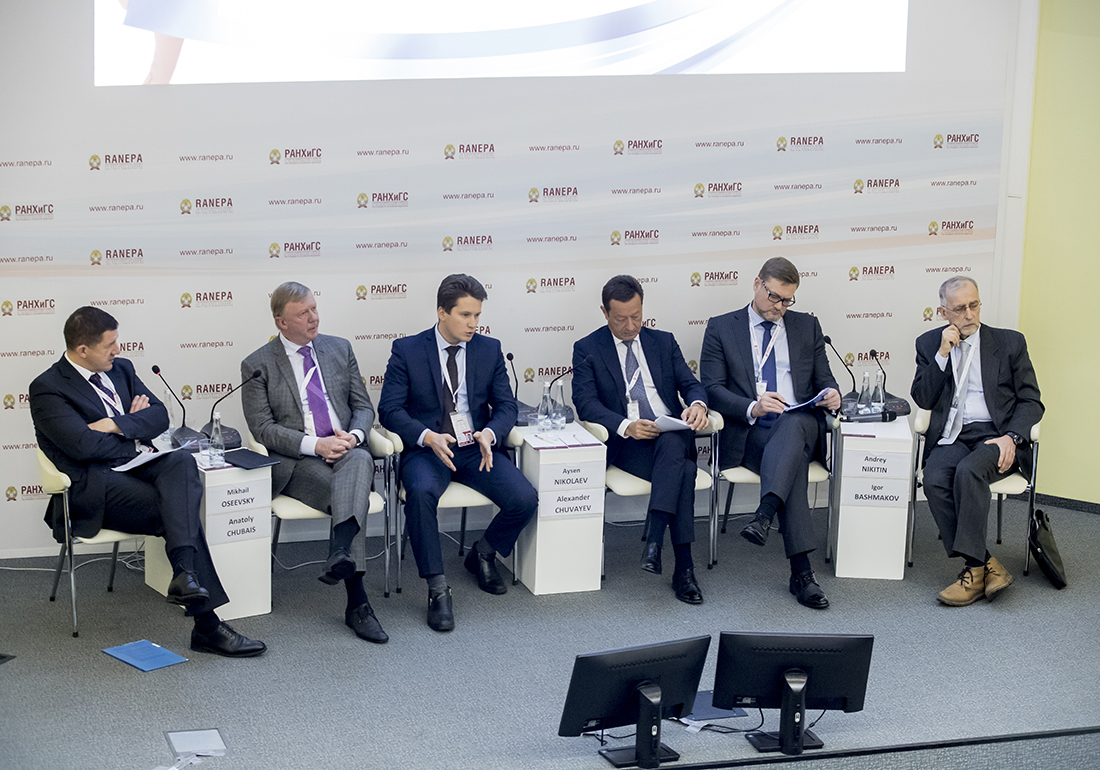 On the second day of the Gaidar Forum, an expert discussion took place on the issues of improving the energy efficiency of the Russian economy. Anatoly Chubais, Chairman of the Management Board of Management Company RUSNANO, Mikhail Oseevsky, President of Rostelecom, Igor Bashmakov, Executive Director of the Center for Energy Efficiency, Alexander Chuvaev, Director General of Fortum PJSC, Dmitry Denisov, Director of Project Finance of the Ministry of Energy of Russia, and Mikhail Gilyov, Director of the Housing Department of the Communal Services of the Ministry of Construction of Russia, discussed the role of energy efficiency in Russia's economic policy, methods for improving energy efficiency, and the place of renewable energy in Russian economy.

Mikhail Oseevsky opened the discussion with the statement: “In recent decades, the slogan of the Russian economy have been "modernization and innovation", now the slogan "digitalization" is more relevant, but the slogan "energy efficiency" has never been in the spotlight. He pointed to the injustice of this situation, because Russia ranks third in the world in terms of energy consumption, and in terms of electricity costs per GDP unit is among the last.

Igor Bashmakov agreed with this point of view, pointing out that economic growth is impossible without increasing energy efficiency. He explained that “if you step beyond the borders of economic availability of energy, the growth of the economy slows down or even stops.” The expert compared this effect with wings that don't let the economy take off.

Igor Bashmakov explained the high energy intensity in Russia by the low level of energy prices.  He stated that:  “With this low energy efficiency slowing us down, Russian economy can turn into a Lilliput in the country of Gullivers here. We can't let them leave us behind! We must catch up!”. The expert pointed out that the old non-ecological energy markets can only lead to stagnation of the Russian economy. "The scenario when the whole world is stepping into "green" future, while Russia remains in this “red” present is no good for us!" – with these words Igor Bashmakov finished his speech.

Anatoly Chubais agreed with his colleague, putting forward the axiom: the cheaper the electricity, the more wasteful the country's economy. He also noted that the price of electricity in Russia is the lowest in the world, and that is why the area of energy efficiency if currently facing stagnation.

Anatoly Chubais proposed two methods for improving the energy efficiency of the Russian economy, noting that both are extremely painful, but really necessary. The first method is to increase the price of electricity to create situation in which the rich will pay more and the poor will stay within the same electricity rates. Alternative method is a way of step-by-step prohibitions with the use of administrative fines. In addition, the expert drew attention to the importance of renewable energy as an economic cluster for Russia, since its energy efficiency is much higher than that of traditional energy.

Alexander Chuvaev noted that energy efficiency and social stability often go along so he suggested creating such a system of state regulation to encourage business to be energy efficient: “We need to set a goal for business without trying to get into its profits, and then people engaged in it will do everything to get their profit. And the goal should be one that does not infringe the economic interests of its counterparty", he added.

Dmitry Denisov also spoke about the importance of state regulation of energy efficiency, suggesting that organizations should be regulated not by indexation methods, but by the most effective solutions for the industry. The expert also pointed out that we need to create a program of co-financing of the subjects of regional programs to improve energy efficiency in the country.

“My colleagues spoke about the low cost of electricity in Russia, however, we can say for sure that this industry is in a privileged position in the system of public services compared to tariffs for water and heat, which is significantly understated. The state has to subsidize these industries, as they do not bring profit. These subsidies should increase the depreciation base in the tariff.  The growth of tariffs will occur on the amount of depreciation, and this depreciation will become a source of updating existing equipment and building new pieces of equipment without additional investments", Mikhail Gilyov commented.

The panelists agreed on the lack of state co-financing of regional energy efficiency programs, and also emphasised that the overall level of energy efficiency in the country depends largely on how efficiently households use their energy. Experts noted that in order to achieve national goals it is necessary to raise the level of ecological culture and education in society. “In order for all of us not to become lilliputs on the world economic arena, we must be ready to pay for energy efficiency both as consumers and as taxpayers,” Mikhail Oseevsky concluded.