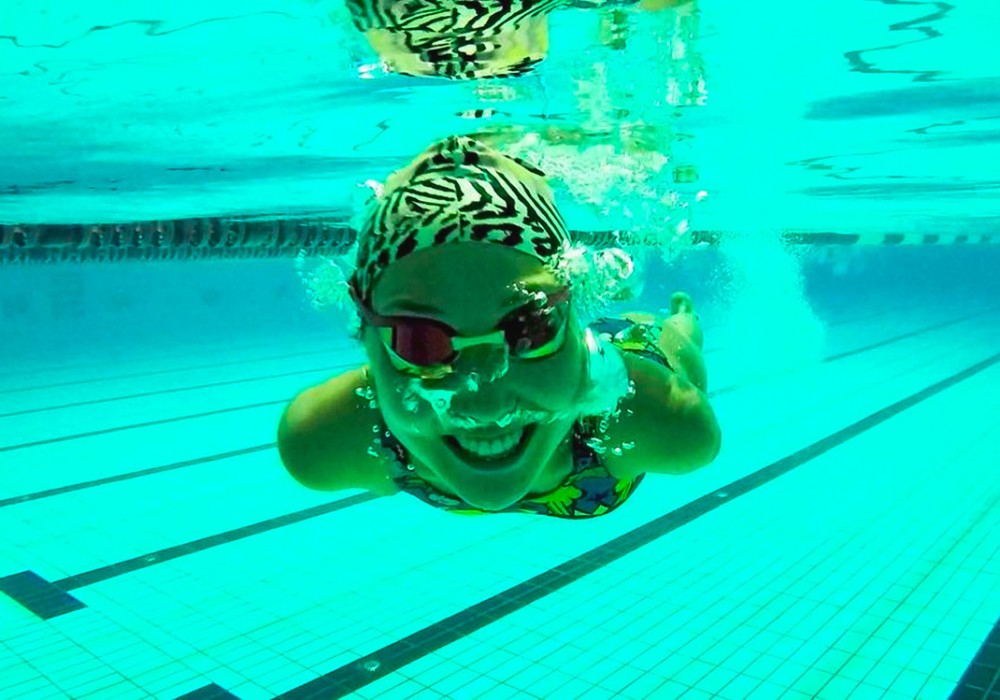 This 26-year-old girl presents a fascinating combination of strength and weakness. Although she looks delicate and fragile wearing her dress and high heels, she is world and European champion in swimming. She has no hands, but look how she does the push-ups. She flashes an open and cheerful smile, but this does not mean she never feels despair.

Anastasia Diodorova, the silver medalist of the Paralympic Games, the gold medalist of several world swimming championships (in Rio and Montreal) among athletes with impaired mobility. She knows how to work with no hands and never give up. The Life.ru portal interviewed her about how she lives and what helps her be strong on December 3, the United Nations' International Day of Persons with Disabilities.

“I was born and raised in Moscow,” Anastasia says. “As a child, I went every year to visit my grandmother in Yakutia with my family. When I was three years old, I went for a walk around the village, and climbed into a transformer booth. Bare wires, an electric shock of 10,000 kilovolts. My hands charred immediately. The accident was followed by amputation – multiple operations. I spent about two years in hospitals. The company responsible for the accident paid for my treatment. At five, I went to Germany for. When the prostheses were ready, I remember having fun pushing the stroller with a doll with my new hands.”

“My parents brought me up as an independent person,” she says. “My family never singled me out. I had the same duties at home as my older brother and sister, like dusting and watering flowers.”

Anastasia learned how to do things with her feet, even to hold a needle and thread. Her prostheses were uncomfortable. The modern “smart” prostheses were not available at that time; the ones she had were difficult to get used to for a child.

“I wore my prostheses on my first day of school,” Anastasia says. “And continued wearing them for two weeks, so as not to shock my classmates. The prostheses were uncomfortable, so I stopped wearing them. Everyone already knew anyway.”

At first, she wrote with her foot, which was embarrassing. Her teacher stayed in the classroom with her during recess, to give her time to finish the work that the other kids did during the lesson.

“In my fifth grade, I began to write in the classroom, because they gave us so much information, it was difficult to remember everything,” she says. “And then I had a brilliant idea: to use two chairs. I sat and on one chair and wrote on the other.”

It became much easier at the university, she says:

“We were all adults, and everyone knew, but never asked too many questions, as children do: like, how it happened, and why. But I never was too embarrassed even as a child. I talked about what happened to me.”

Anastasia earned her degree from the Russian State University of Physical Culture, Sports and Tourism. Now she is studying Management of the Sports Industry at the RANEPA Institute of Industry Management.

When Anastasia went with her parents to Germany for prosthetics at five, her mother learned about the Paralympics. Her parents decided that their daughter needs to do professional sports. Although they planned to raise a champion in athletics, she excelled in swimming.

“I go to the swimming pool every day,” she says. “On my training days, I practice in the morning and evening. I get up at 6.30, and two 2 hours later I am swimming. The evening training is from 16.00 to 19.00. If other things emerge between workouts, I take care of them after. If not, I go home to sleep. I never miss my chance to sleep. Sport is exhausting, and often I do not get enough sleep, but the less free time I have, the more I accomplish.”

In 2008, Anastasia won the silver medal at the Beijing Games for the Russian Paralympic team. At the next Paralympics, she failed to make it to the medals, so she hoped to do better at the Games in Rio.

“In London in 2012, I didn’t do well: I was 7th and 8th,” she continues. “My coach and I analyzed the mistakes and altered my training program. Things were to turn out differently, but we were not qualified for the Games. That was a major blow, after four whole years of exhausting training with the single aim of showing your best result.”

Her life outside sport

“I practice less these days,” Anastasia says. “I plunged into my studies, my daily activities and cares. Life goes on. Now I want to build a career outside sports; I plan to work in sports management. I certainly dream of participating in the organization of major competitions such as the Olympic and Paralympic Games.

“I do not even know where I derive my strength from. I have been through very hard times. I need to prove something to myself daily. Every single day, every morning I wake up and realize my progress toward the target has been only a millimeter, and I still have 500 million kilometers to go. But I rally somehow. My strength finds me.”

“The best cure for depression is doing something,” she says. “One needs to find their strengths, and play to them. Weaknesses can be improved by exercising and sports. It is not so difficult. Just find some time and do it every day.”