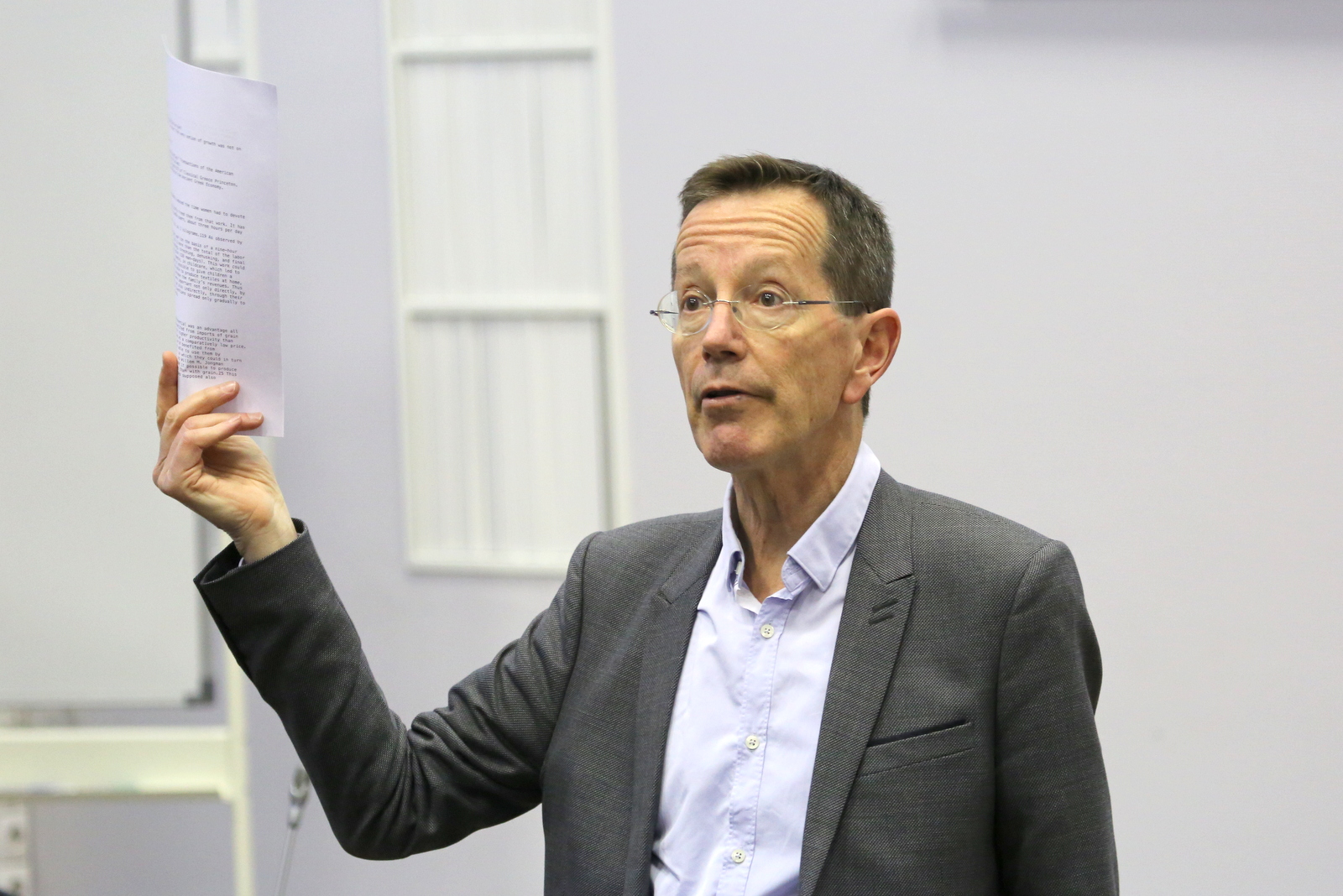 On April 18, 2017, the Center for Russian Studies and Center for Economic and Social history at RANEPA hosted Alain Bresson, one of the world's leading experts in the field of Ancient Greek economy, Professor of classics at the University of Chicago.

The lecture, entitled «Growth and the Determinants of Growth in Ancient Greece», addressed the issue whether we can speak of economic growth in the Ancient world. Professor Bresson argued that in spite of the lack of sufficient amount of evidence, we ought to talk in the terms of the economic growth at least in the case of Ancient Greece. According to Bresson the main determinants of ancient economic growth were the rise of trade in the result of the regional division of labor as well as technological progress reflecting high literacy rate among Greeks (not far from the 17th-18th centuries average levels).

Ordinary Ancient Greeks wrote as much as ancient Babylonians, but the burning of the Library at Alexandria guaranteed that writing of a systematic economic history of Ancient Greece would become a very ambitious enterprise. Since most of the texts were written on wooden tables and papyrus, they were completely destroyed. However, some conclusions can be made on the basis of the data contained in stone or clay tablets. In order to estimate the growth in Ancient Greece one can use different proxies (e.g. coins, they material, quality and circulation, the number of houses in the city-state, they size, engineering solutions, furniture, adornments and other archaeological finds from Ancient Greek city-states and/or from Pompeii). One of the most important proxies is the number of shipwrecks. In 1992 British scholar Parker made the table summarizing the data about shipwrecks that were known by the time and observed that over time starting in the Archaic period till the end of the Hellenistic period there was a huge increase in the number of shipwrecks. The graph reveals the general pattern of positive growth until the establishment of the Roman Empire. Other important evidences and proxies are also confirming derived positive growth.

Professor Bresson paid special attention to the specific institutional framework provided by the city-state. The system was based on polis organization that implemented a relatively egalitarian social model. Greece was a society of contract where citizens-hoplites committed themselves with an agreement to perform some duties. The city itself consisted of the group of people who respected the common rights and the rule of law. Urbanization was closely linked with the process of division of labor which helped to increase the productivity of the city-state economy. This state of affairs reinforced with regional specialization leads to the rise of trade. Bresson believes that slavery was not a huge institutional problem. There is a lot of evidence that demographic problems solved mainly through girls infanticide, but due to regular wars men-to-women ratio was normal.

Alain Bresson listed a whole range of Ancient Greek technological innovations: selection of seeds and animals, specialization in crafts, watermill and oil press, aeolipile, etс. The most significant and widely distributed innovation was connected with the grain grinding operations. The new technology considerably reduced the time women had to devote to grinding process. That time could be invested in other domains: in childcare, which led to better hygiene and health. Such innovations were important not only directly by saving time but also indirectly through their major economic implications.

One of the distinctive characteristics of the Greek system was the way they used capital – citing Plutarch, Bresson told about Greeks, who preferred to sell all the crops on the market after the harvest. People used the market systematically; it was the system through which they also could accumulate capital loan. They quite clearly understood the notions of «risk» and «interest». Developed coinage system constitutes the evidence of it. Furthermore, data on imported grain during the periods of harvest contained in stone demonstrate a high level of agricultural and artisan regional specialization – the higher was dependency from imported grain the higher was specialization.

The decay of Ancient Greek economy was interconnected with the institutional changes. The establishment of the Roman dominion in Greece, growing income inequality and the progressive weakening of the city-states' morale resulted in a process of negative growth under the Roman Empire.