Materials recycling is impossible without expansion of producers responsibility (VIDEO) 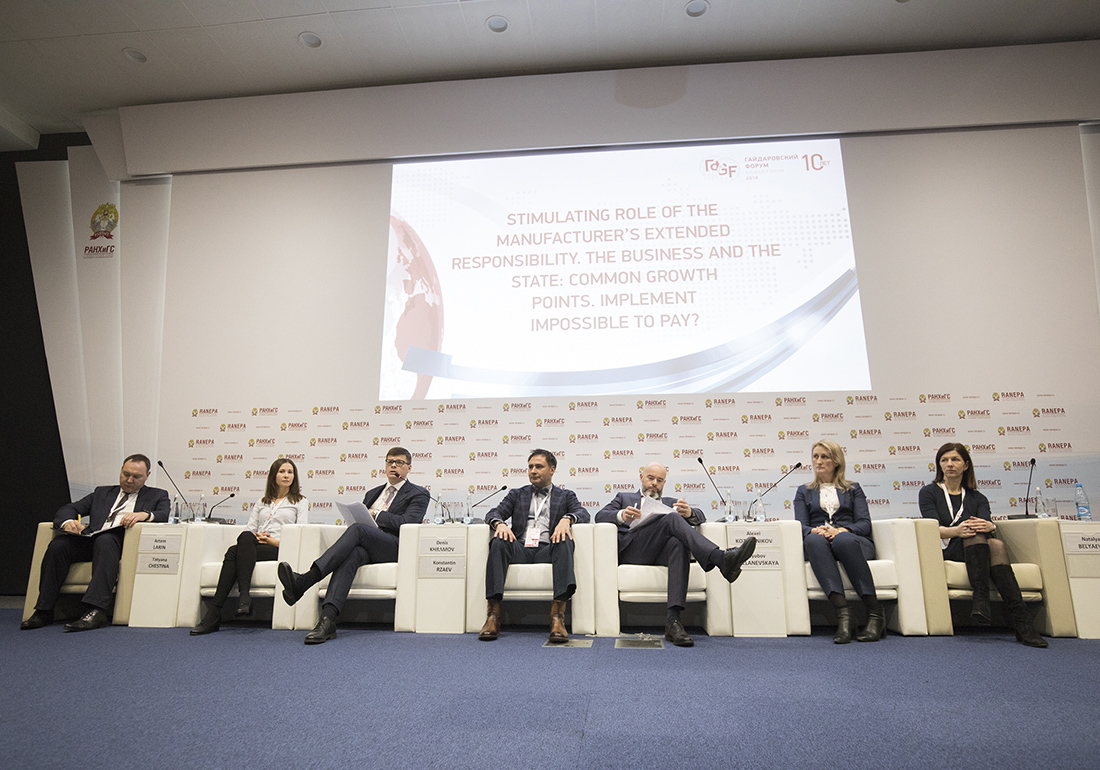 On the third day of the Gaidar Forum, the role of producer’s extended responsibility in the development of the processing industry in Russia was discussed. The panel was moderated by Artem Larin, Partner, Head, Clean Technologies and Sustainable Development Group, EY.

He stressed that issues related to waste management are becoming more and more important, and at some time they may even become part of the political agenda. According to Larin, such a position is justified by the fact that the mechanism of producer’s extended responsibility gives positive effect.

Denis Khramov, First Deputy Minister of Natural Resources and Environment of the Russian Federation, focused on how the extended responsibility of producers is implemented. Having reviewed some of the trends in materials recycling, he voiced the following opinion: “There are excessive processing capacities, we see the possibility of processing larger amounts of these resources, but, unfortunately, we don’t see the growth of the corresponding implementation of recycling standards”.

The speaker pointed out that the systematic increase in the rates of environmental collection is seen as an incentive for the capacities development. Mr. Khramov also told the audience about the draft law prepared and submitted to the State Duma, which establishes responsibility for non-compliance with EPR (Extended Producer Responsibility) mechanisms.

Instead of Aleksandar Ruzhevich, Director General of Coca-Cola HBC Russia, who was absent due to illness, informational video on the implementation of the Coca-Cola program “A World Without Waste” was shown sharing the results of the program “Separate with Us” for SWC (separate waste collection), as well as methods and technology of program implementation.

Continuing the theme, Tatiana Chestina, Development Director of the ERA Youth Initiatives Support Foundation, voiced methods and technologies used by Coca-Cola in its programs in Russia: “Separate with Us!”, “Ecodvor”, and “Ecoflashmob”, their results and their contribution to implementation of further recycling programs.

The President of the GC "Ecotechnology", Konstantin Rzaev, spoke about eco-technologies; how to handle eco-packaging; about the importance of the SWC, which helps the positive attitude of people and help in raising awareness of the bins for separate waste collection; about the role of large corporations in EPR and focused on the potential of processing development for the following years.

The Executive Director of RUSPEC, Lyubov Melanevskaya, spoke about the key role of packaged goods producers in the EPR system, what RusPEC is, about the mechanisms for EPR implementation, and what, in her opinion, is necessary to maintain the independent implementation of the EPR.

Natalya Belyaeva, Deputy Chairperson of the Committee for Natural Resources Management and Ecology, Business Russia, and the General Director, Delphi, dwelled on a pressing topic: “Change of the eco-collection administrator: strengthening recycling control or a deterrent?”; she spoke about the purpose of the EPR implementation in Russia and a fiscal view on the EPR.

At the end of the discussion, the experts answered questions from the moderator and the audience.