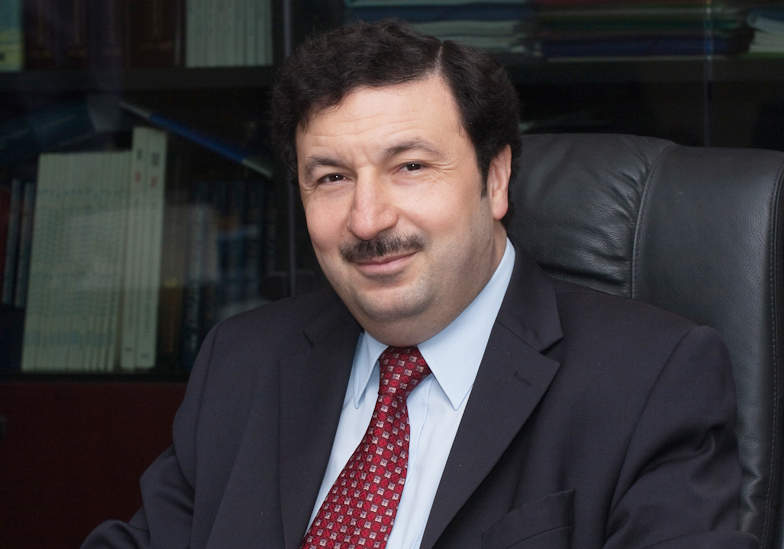 Can Russia, under its authoritarian regime, jump ahead and become one of the world’s wealthier and more technologically advanced nations? As Western sanctions get harsher and its economy struggles to grow, that future seems pretty far-fetched.

But according to Vladimir Mau, an economic historian and frequent adviser to the Russian government, anything is possible.

Mau is an enduring constant in Russia’s post-Soviet policy-making circles. He was a close adviser to Yegor Gaidar, the prime minister who initiated radical market-oriented reforms under President Boris Yeltsin in the early 1990s, and he has held important posts under just about every government since. He now heads the Presidential Academy of National Economy and Public Administration, a state institution with about 180,000 students nationwide. As an academic with publications on subjects ranging from revolution to human capital, he’s uniquely capable of putting current events into historical perspective.

From his vantage point, Russia’s authoritarian tendencies – unwelcome as they are – fit in to a broader shift away from liberal democracy, brought on by the global financial crisis of 2008. Western sanctions have the unintended consequence of making Russia more attractive for Russian capital. The country’s technological backwardness could be an advantage. And Europe will eventually stretch from Lisbon to Vladivostok.

Here is an edited version of our conversation:

Mark Whitehouse: Almost 20 years ago, before Vladimir Putin came to power, you told me that authoritarian rule was inevitable in Russia. As you put it, “Democracy needs capitalism, but capitalism doesn’t need democracy.” That turned out to be prescient. Now Putin is in the last of his presidential terms – assuming no changes to the constitution. What comes next? Will Russia ever be both a capitalist country and a liberal democracy?

Vladimir Mau: When I made that prediction, Russia was going through a full-scale revolution – a systemic transformation with the collapse of state institutions. Never before had a completely centralized economy transformed into a market economy. The government had collapsed; it played no active role. In such chaotic periods, general rules emerge. So one can try to predict something based on the interaction of natural forces. One of the elements of this logic is the emergence of authoritarian rule for any post-revolutionary stabilization.

Now the revolution is over, new important challenges have emerged – and they are not just of domestic origin. We have to consider global trends. The global crisis that started in 2008 should be compared with those of the 1930s and the 1970s. Each of them was a structural crisis, the kind that engenders new political and economic configurations. The political result of the current structural crisis is the rise of a right-wing, nationalist strain of populism. Many European countries are moving away from liberal democracy. And Russian post-revolutionary consolidation seems to fit with the general trend. But what is interesting in the Russian case is that authorities here avoid populist practices, and particularly avoid economic populism.

We now know that Francis Fukuyama was wrong when he believed that liberal democracy would be the ‘end state.’ There is no end state – not Prussian constitutional monarchy (according to Hegel), not communism (according to Marx), not liberal democracy. But we can glean some insight from a work by Samuel Huntington, called “The Third Wave.” He made an interesting point about taxation and representation: If you don’t have the former, you can do without the latter. Societies tend to demand democracy when they reach a certain level of gross domestic product per capita, but there are exceptions – for example, oil-rich states. They can meet the demands of the people without representation.

Someday liberal democracy will be popular again. Sooner or later, Russia will be part of the common European market. In his first two terms as president, Vladimir Putin very much shared this vision: He was very keen to consider a Europe from Lisbon to Vladivostok. But the West was not welcoming. It wasn’t ready. I’m not saying that the European Union shouldn’t have expanded into Eastern Europe, but it was quite clear at the time that the expansion would hurt relations because of all the historical problems between Russia and its Eastern European neighbors.

Don’t get me wrong: I don’t mean to justify any political trend. But as an economic historian I try to understand the logic of events and not to blame or complain.

MW: So you’re an optimist, just a very long-term one.

VM: I’m a historical optimist, as a Marxist (or liberal Marxist, better to say) should be.

MW: Putin and his advisers have ambitious goals for Russia’s economy. Yet he has demonstrated time and again a lack of regard for property rights and personal freedoms. Can he achieve the former without changing the latter?

VM: The simple answer is no – in the long run. But actually we know that anything is possible. History knows many examples of rapid economic development without traditional liberal values.

Russia’s anti-crisis policy of 2014 to 2016 was very successful – a very small decline in GDP, stable employment, stable currency reserves, inflation under control, capital outflows almost stopped, current account balanced. There was no shift from ruble assets to international currencies (for the first time in 30 years). But successful anti-crisis policy does not guarantee rapid post-crisis development. And this is the key challenge now.

It’s well understood that [in today’s Russia] legal and political administration is more important than economic. We’re in a situation of diminishing returns from economic reforms. You can discuss tax and financial policy as much as you want, but if you do not give people confidence in the sanctity of life and property the rest is pointless.

I often repeat a phrase I read in a Soviet economic journal from 1921. The Soviet government had announced a sort of economic liberalization called the New Economic Policy. An NEP official asked a ‘nepman’ (a private entrepreneur) whether the Soviet bourgeois would put its money in the bank. His answer: Of course not. You’re guaranteeing the safety of the deposit, but not the safety of the life of the depositor.

It’s a matter of political stability, of the administration’s ability to provide predictability and the rule of law, improvement of law enforcement. It presumes stability. I like liberal democracy. But real life is more complicated than political and economic doctrines, than traditional liberal mantras.

Interestingly, the Western sanctions have helped in a way. Russians now see the situation in the West as less predictable than at home. So they think it’s safer to keep their money here. I’m not talking about corrupt money. I’m talking about normal, loyal Russian citizens who wanted to diversify their savings, and whom Western banks don’t want to deal with anymore because of their new compliance regulations. And this regulation is definitely moving away from a liberal system that presumes competition among banks.

MW: Do long-term plans, like the one Putin laid out after the presidential election, even make sense in a world where technology is changing so rapidly?

VM: It’s important to work out a strategy, to understand common values and common vision, the direction of development. And the president’s long-term plans are about basic principles that are quite clear and shared by experts and the general public — life expectancy, human-capital development, infrastructure, digitization, ecology, productivity, reducing poverty, etc. It is not about technical details, because technologies change too fast. It is easy to notice that these priorities are not very different from the programs of governments in the European Union or the U.S.

Even in the mid-20th century the limited role of strategies as technical documents was quite clear: “The details of a plan which was designed years in advance are often incorrect, but the planning process demands the thorough exploration of options and contingencies” — these words are attributed to Dwight Eisenhower. In the contemporary world, with rapid technological change, an implemented strategy will definitely be a failed one. The same goes for long-term investment. By the time you’re done, you can find that it’s not efficient because the technology has moved on.

Ten years ago, we didn’t know the iPhone, we didn’t know Bitcoin or blockchain. People want to build high-speed trains, but we know that transportation technology also changes rapidly. What is considered as very efficient now could be inadequate 10 years from now, after a lot of money has been invested in what then seemed efficient.

No less important, new technologies seem to reduce the role of long-term investments. Take shale oil and gas. It’s much less capital-intensive, so you can stop and start production, move around, whatever. When capital expenses become close to operating expenses that creates a radically new political economy. That flexibility is very important.

MW: Does this create opportunities for Russia, which has a lot of catching up to do but isn’t seeing much private investment?

VM: It creates opportunities for any newcomer to the technological trend. But there’s a question of approach. It’s a mistake to set a goal of producing innovation, and much more important to be a country that can absorb innovation. Say, Australia is very innovative, but it absorbs more than it produces.

MW: So how is Russia at absorbing technology today?

VM: Not great. Resource-rich countries aren’t inclined toward innovation. That said, Russia has a chance with digitization, which plays a big role in the government’s plans. Not long ago I tried to use Apple Pay in Paris. Half the time they told me they didn’t know what it was. You can use it everywhere in Moscow and St. Petersburg as well as in many other Russian cities.

It’s the advantage of the newcomer. It allows us to avoid some pitfalls.