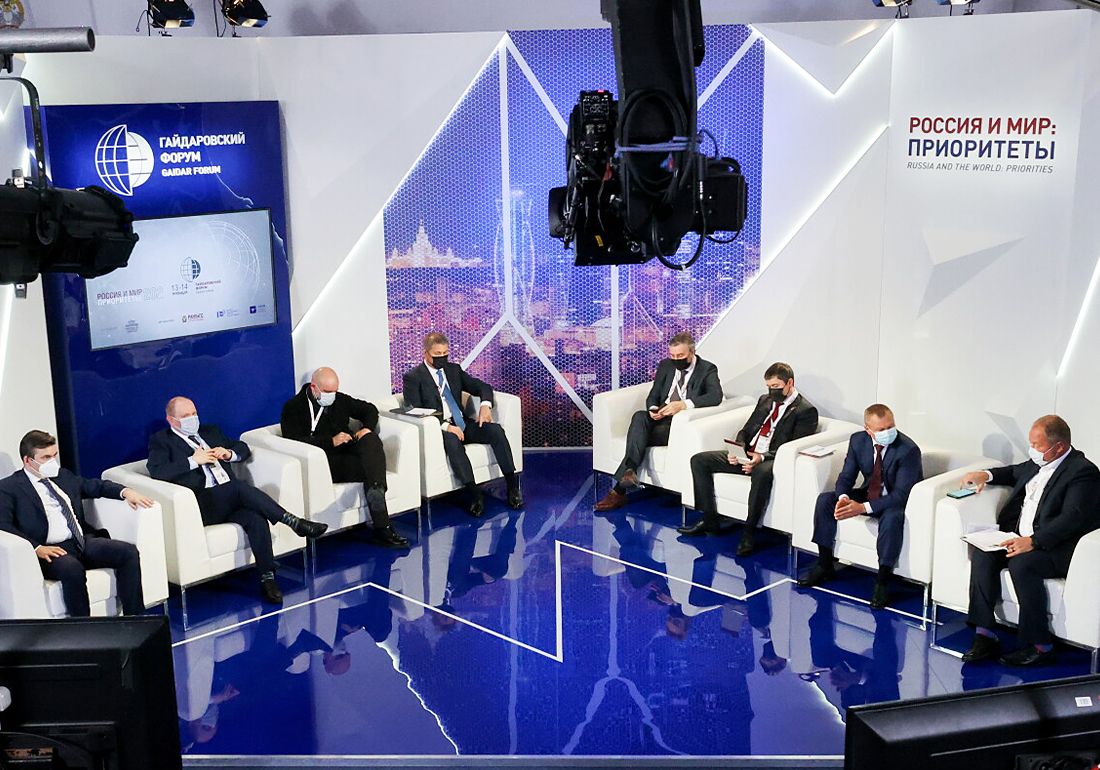 The fight against the pandemic has forced the whole world to take a new look at the condition of healthcare systems. Medicine had to make a rapid qualitative leap in the development of infrastructure and telemedicine, while the importance of retaining human resources in the industry became more evident than ever. The key challenges and technology breakthroughs of recent years were the main topics of the discussion “Rethinking the National Healthcare System,” held on the first day of the Gaidar Forum 2022.

According to Denis Protsenko, the pandemic has forced the governments to review healthcare priorities and formulate new tasks, and 2022 could be “the year of the breakthrough towards a reboot of the healthcare system”.

“Rethinking the national healthcare system is very important for an in-depth discussion, including regional issues and challenges. Especially if we are talking about the modernization of primary care,” said the head of the Republic of Bashkortostan, Radiy Khabirov, in his speech. He noted that this topic is especially important for the region — in the republic of four million people, more than a third of the population lives in rural areas.

According to Mr. Khabirov, 73 modular and 8 permanent rural health posts and two rural outpatient clinics were opened in Bashkortostan in 2021 as part of the federal project for the development of primary healthcare. In addition, two modular infectious disease hospitals were rapidly deployed, and two more hospitals are under construction. Plans are in place to build three more hospitals.

Separately, Khabirov touched on digitalization trends in the industry — telemedicine and other digital formats are one of the priorities in the republic, having become especially relevant in the last two years, because of the pandemic.

“We tend to think of medicine as a conservative industry. But we can see a rapid change in the approaches, new technologies being introduced, including remote counseling, remote consultations, medical teleconferences, and artificial intelligence solutions, which significantly reduce the workload on the doctors and the risks associated with the pandemic. Today we need such tools that will really help doctors, make medicine more accessible, and improve the quality of care for the patients,” Radiy Khabirov said.

During the session, the participants discussed the key problem of healthcare, i.e. financing and procurement of materials for the industry. Vladimir Zelensky, First Deputy Minister of Health of Russia, noted that the inflow of investment into healthcare today is enormous, but many citizens see no improvement yet. It is necessary to develop a toolkit for the most efficient spending of allocated funds, directing them, inter alia, to improve service, Zelensky said.

“Five trillion rubles have already been invested, but this money should not be spread thin trying to fix all the shortcomings. Instead, it is vital to prioritize, that is, to invest in human resources — salaries of doctors, prospects for career growth, improving working conditions for medical workers. It is also important to make the industry more attractive for private investors,” said the Deputy Minister.

During the discussion of the state of medical infrastructure, Denis Protsenko refuted the opinion that 70% of hospitals and clinics were outdated. According to Protsenko’s personal observations, in recent years new medical facilities were constantly being built in the regions, so the figure of 70% was far from reality, said the chief physician of the Kommunarka Hospital.

The participants of the session unanimously named the personnel issue as one of the key prerequisites for the development of the industry. Increasing the prestige of medical professions, attracting school graduates to medical colleges, and retaining personnel in healthcare — these are the issues that need to be addressed to ensure long-term viability of the medical system, the speakers noted. Provided this is more of a work in the long run, that is, the results of these efforts will be visible in 10-15 years, one should not expect an immediate effect.

Dmitry Makhonin, the Governor of Perm Krai, said in his speech that addressing the shortage of skilled personnel, particularly in rural and remote areas, is one of the top priorities in healthcare for the regional government over the next three years. Mr. Makhonin emphasized that the authorities have allocated funding to stimulate students and young professionals.

Denis Protsenko emphasized the importance of increasing the motivation of doctors, not just in financial terms. “We have to change the system of doctors’ motivation, put the interests of patients above all, teach doctors to empathize with them,” Protsenko said. The chief physician noted that we should not speak of patient focus, but of patient-centricity.

When discussing technological innovations designed to aid the development of the healthcare system, the Governor of Ivanovo Region, Stanislav Voskresensky, shared the experience of his region. For example, the introduction of artificial intelligence for CT scans has reduced the procedure duration from 20 minutes to 5 minutes.

“We see a chance for a major overhaul of the healthcare system, because we are, after all, a high-tech country with a strong engineering tradition. International experts say, for example, that dozens of exceptional technological solutions exist around the world that ultimately lead to an increase in healthy life expectancy, a relief for the physicians, and a higher quality of healthcare. I am sure our colleagues in the regions have a few solutions as well,” Voskresensky added.

A video of the session is available here.