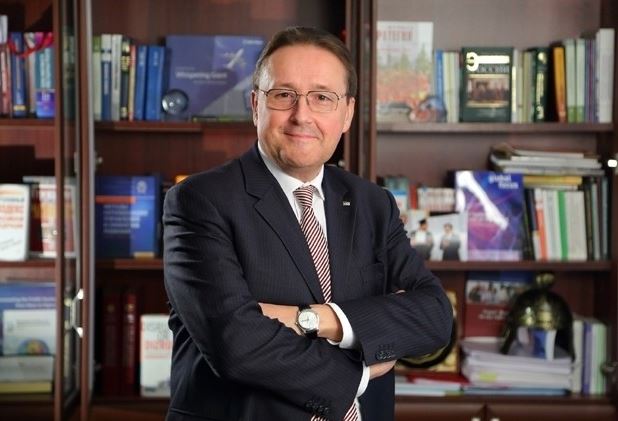 Sergey Myasoedov and three fellow academics founded IBS-Moscow in 1988. Since the fall of the Soviet Union, his pet project has become one of Russia’s leading business schools 1988. The Soviet Union is in its twilight years. In Moscow, four academics put their money together and embark on the project that they hope will change the landscape of Russian business education.

Back then, only two imitation business school existed in Russia, both established by, and firmly under the control of, the Central Committee of the Community Party. The Institute of Business Studies (IBS) Moscow, the professors decided, would be Russia’s first private, non-profit business school.

IBS-Moscow launched as a unique, forward-thinking school—selling courses to students on the open market—three years before the collapse of the Soviet bloc.

“It was like a discovery of a new world for us,” explains Sergey Myasoedov, vice rector of RANEPA university, dean of IBS-Moscow, and one of the four founding professors.

“We had to learn everything from our western partners,” he continues. “What we were doing was unique for the Russian market, so that first decade got us a lot of valuable experience.”

Sergey speaks from Cannes, France, where days earlier he, along with over three billion people worldwide, watched as France defeated Croatia in the final of the 2018 FIFA World Cup in Moscow.

In the past 30 years, he’s seen both Russia and Russian business education evolve. Now, Russia is home to more than 100 business schools—private, state-backed, university-backed, and online—all members of the Russian Association of Business Education (RABE), of which Sergey is president. Around 60 business schools run MBA programs.

Sergey’s IBS-Moscow became part of RANEPA in 1996—a mammoth university with seven Moscow campuses, 54 regional campuses, and almost 200,000 students. RANEPA is the alma mater for over 45% of Russia’s MBA grads.

Today, IBS-Moscow is RANEPA’s leading business school, boasting over 2,000 students. It’s quasi-private, paying 30% of its revenue to RANEPA to use its facilities, but with its own brand, program portfolio, faculty, and market-driven approach.

Its programs—which cost $25,000-to-$35,000—are more affordable than those on offer at government-backed Moscow School of Management Skolkovo, for example, priced at around $100,000.

“All are very good schools, but we stand apart. We work not only with the biggest state companies, but also with the hidden champions of the 21st century; Russian medium-sized and big businesses that are not connected with government money. “We see those individuals [in those businesses] as the core of future society, and that’s our positioning inside the country.”

Outside the country, Russian business schools are targeting global expansion, chasing internationally-recognized accreditations and building partnerships with foreign schools. IBS-Moscow boasts more than 100 partners and 17 double-degree programs, including a joint-EMBA with Antwerp Management School which celebrates its 25th anniversary this year.

Sergey is in advanced talks with France’s EDHEC Business School over the development of a fintech-focused masters sponsored by Sberbank, Russia’s largest bank. IBS-Moscow has already worked with INSEAD, in 2016, and IMD, in 2018, to create executive training programs for Sberbank employees.

Sergey say’s he’s looking to expand into the Western market—with potential partnerships with France’s NEOMA Business School and the University of London on the cards—and to continue a successful expansion eastward, to the former Soviet countries and, ever more keenly, China.

IBS-Moscow’s standalone MBA and Executive MBA programs are already accredited by the Association of MBAs (AMBA). The school is also in the final stages of AACSB accreditation—a rigorous, six-to-seven-year process.

“If everything goes to plan, we’ll get AACSB accreditation in February or March next year,” Sergey beams. If that transpires, IBS-Moscow will become the first business school in Russia to do so. Then, says Sergey, they’ll look to EQUIS accreditation and the triple crown.

“Step by step, we’re moving into the international market,” Sergey continues. “We want internationalization—and to be part of global accreditations bodies and rankings—to learn from the experiences of others and share our experiences with them.”

IBS-Moscow attracts around 150-to-180 international students each year, although almost 70% come from former Soviet countries. Finding professors who will work in Russia, and who can teach in English, can be a problem. Indeed, IBS-Moscow only offers one program delivered entirely in English. The one-year, pre-experience Masters in International Business is run in collaboration with the International Business School Alliance (IBSA), and welcomes around 15-to-20 international students on-campus for a semester each year.

But, Sergey says, changes are afoot. The joint-EMBA with Antwerp Management School is now taught 75% in English, with Russian professors obliged to use English for professional terminology too. At undergraduate level, every student spends one semester in their third year learning entirely in English. There are plans to turn that one semester into three.

After founding IBS-Moscow, Sergey spent the early 1990s studying at top-tier institutions in the West; Durham Business School in the UK, Harvard, and Wharton.

He knows that Russia still has some way to go if it’s to imitate a Western model of business education built on years of free-market capitalism. Often, he says, people looking to gain practice-based knowledge and skills struggle to do so in Russia because they’re taught by professors who’ve never had any real business experience. But the future, he says, looks promising.

Sergey is keen to highlight one stat that he’s particularly proud of. Since the school’s inception, only 30 years ago, 26 full families have graduated from IBS-Moscow—mothers and fathers from executive programs, followed by their children completing bachelors or masters degrees.

Gradually, the importance of business education in Russia is being passed on from generation to generation. And Russia, he says, is boiling with ideas of business development.