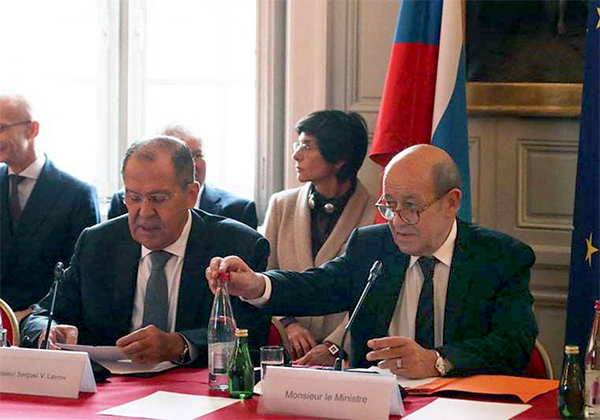 The Russian and French Foreign Ministers, Sergei Lavrov and Jean-Yves Le Drian, underscored the importance of dialogue between countries as well as stable contacts at the personal level. Sergei Lavrov noted the need to involve young people in the cooperation process. The participants discussed youth, educational, and research projects and ways of promoting Russian-French start-ups. The ministers supported the initiatives launched as part of Trianon Dialogue and noted the prominent role of science diplomacy.

Next year’s priorities for the Trianon Dialogue forum are education and academia – the competence of the Russian-French University (RFU). In 2018, RFU mainly worked on the development of educational programs. As a result of this work, more than 400 students got enrolled in 21 RFU programs. Another 27 joint programs are under development. Much attention is being paid to interdisciplinary approach and liaison with businesses. “One of the proposals for the Trianon Dialogue is to improve the conditions for mobility in double degree programs. The RFU is highly interested in this area and is ready to participate in expert discussions,” RANEPA Rector Vladimir Mau, a member of the Coordination Council, said in his remarks.

The first major discussion of education and academia within the Trianon Dialogue framework will be held during the Gaidar Forum at RANEPA on January 15-17, 2019. The meeting participants especially focused on filling the updated Trianon Dialogue Internet platform with content – the digital platform of the civil society forum has evolved into a fully integrated Russian-French portal. The digitalization of education was thoroughly covered during a series of French-Russian bilateral conferences, and was also discussed at global platforms such as the Gaidar Forum and the St. Petersburg International Economic Forum in 2018.

The Coordinating Council approved a preliminary action plan for next year, which includes a comparative study of the French and Russian education systems; the application of digital technology in primary and secondary school and the training of teachers in using digital tools; and preparing a report on the challenges that the two cultures face in connection with changes in education. The Presidential Academy has accumulated a lot of experience in these areas. Comparative analyses of the Russian and French education systems are an important element of RANEPA Institute of Public Administration and Civil Service (IPACS) programs. The book “Russia and France in the global educational landscape” was released in Russian and French last year.

The Trianon Dialogue forum was established on a joint initiative of Presidents Vladimir Putin of Russia and Emmanuel Macron of France and is aimed at strengthening relations between two countries.