HomeNewsNews Migration Problems. Who and Why Goes to Russia (VIDEO)

Migration Problems. Who and Why Goes to Russia (VIDEO) 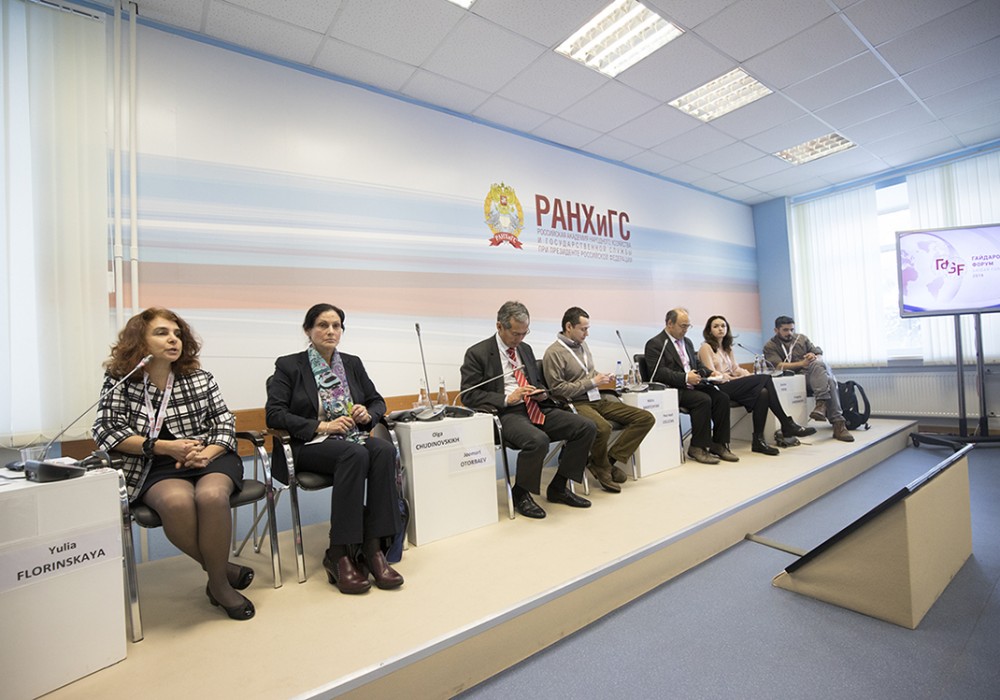 On the second day of the 10th Gaidar Forum, a discussion was held on the current migration situation in Russia and its forecast for the next decade. The experts in this topic were: Nikita Mkrtchyan, Leading Research Fellow, the Institute of Social Analysis and Forecasting, RANEPA, Olga Chudinovskikh, Head of the Laboratory of Economics of Population and Demography, Faculty of Economics, Moscow State University named after M.V. Lomonosov, Djoomart Otorbaev, Prime Minister of Kyrgyzstan (2014–2015), Haci Halil Uslucan, Vice-Chairman of the Expert Council of the German Integration and Migration Funds and Professor of the University of Duisburg-Essen, Karina Pipia, Leading Research Fellow at the Levada-Center, and Yevgeny Varshaver, Senior Research Fellow at the Center for Regional Studies and Urban Studies, RANEPA.

Nikita Mkrtchyan opened the discussion, who with the help of statistics described the current Russian migration situation. He noted that the main "donors" of migration for Russia are still the post-Soviet countries, but the total number of migrants in 2018 has decreased significantly. Against this background, the expert predicted a reduction in the population of Russia, the natural growth reduction of which can not be compensated  by migration. Especially strong reduction of the population in working age is expected, which obviously will have a negative impact on the labor market.

Olga Chudinovskikh pointed out the main problems of migration policy: simplified admission to Russian citizenship and the lack of diverse and understandable channels for migrants to move. According to the speaker, the necessary measures to improve the situation would be to reform the law on TRP (temporary residence permit) and residence permits, a variety of programs for early migration, narrowing the practice of applying for citizenship through the Foreign Ministry to special cases, as well as a broad and competent discussion of new legislative initiatives.

Djoomart Otorbaev, Prime Minister of Kyrgyzstan (2014–2015), noted the great social significance of the problem under discussion and considered it in the context of his country. He drew attention to the fact that Kyrgyz migrating to Russia successfully climb the social elevator thanks to the desire to learn Russian and the desire to improve their financial situation. According to Djoomart Otorbaev, Kyrgyz migration can be a model for the proper integration of the non-Slavic population in Russia.

Haci Halil Uslucan, in its turn, shared his country's experience in the issue of migration policy, describing the demographic distribution of migrants in Germany, as well as the psychological processes of their integration into the country. The expert talked about the crisis of the European refugee policy and how to avoid this crisis.

Karina Pipia, the representative of the Levada-Center, drew attention to the importance of such problem as migrant-phobia in Russian public opinion. According to the data of the analytical center, the majority of Russian citizens are opponents of labor migration and believe that this phenomenon should be limited. Karina Pipia expressed the view that prejudice and negative attitudes towards migrants are often based on myths, and also due to the low “level of confidence” of Russians in other nationalities.

Yevgeny Varshaver, speaking with the report “Migrants of the Second Generation in Russia: a Sociological Portrait” told about how migrants feel when they come to Russia and what difficulties they face. In the course of his research work, the expert found out that integration of migrants is going well, but a number of measures should be taken to make this process more comfortable. Yevgeny Varshaver proposed the following steps: to facilitate receipt of citizenship for those who graduated from a school in Russia; to organize assistance in mastering of the Russian language for migrant children; to provide psychological assistance to young women from conservative families.

The disputants came to the conclusion that it was necessary to adapt to the new migration situation in Russia, to take measures to solve current problems, and also to adopt the positive European experience in this field.