HomeNewsNews Natalya Demidova: Our mission is ideas, values and knowledge

Natalya Demidova: Our mission is ideas, values and knowledge 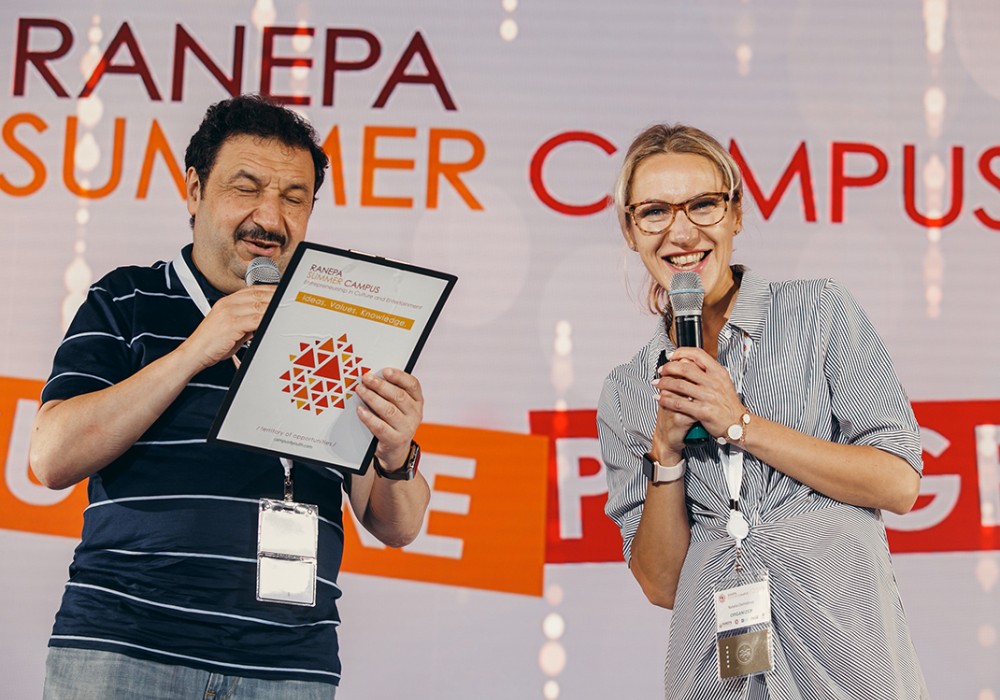 Question: Ms. Demidova, how was this year’s theme – Entrepreneurship in Culture and Entertainment – chosen?

Natalya Demidova: Each member of the organizing committee would probably have their own version. I would say we came to this idea in the process of talking with one of our prominent experts who headed the group of tutors and moderators this year – Bjorn Stenvers, Executive Director of UNESCO’s ICOM Endowment Fund. Bjorn has worked with us as a tutor for the last few years, and his teams have always shown good results. So while discussing the possibility that he would lead the group of tutors and moderators this year, we also thought of taking advantage of his knowledge, experience, and resources for attracting experts in his field. So we agreed on doing culture and entertainment projects, which certainly were among the brightest.

Question: Overall, 220 students participated in the Summer Campus. How did you select the participants?

Natalya Demidova: To be precise, we had 214 students. We always use the same selection procedure, regardless of the topic. We are certainly open to applications from the best students of the Moscow campus and branches of the Presidential Academy, and students representing universities of the Republic of Tatarstan. Undoubtedly, we are pleased with the growing interest from foreign students – we have slightly changed our strategy for attracting them. Until recently, when we were only beginning to invite foreign participants, we focused mainly on students of foreign universities-partners of the Academy, while now we also rely on word of mouth marketing. That is, the students who have attended our previous events begin promoting them on social networks, and as a result, for the last few years we have had foreign participants not necessarily representing the Academy's partner universities – there are more than 300 of those around the world.

The selection mechanism is multistage: after applying, all candidates pass an online English language test, because, as you can see, the working language on the Campus is English. Next, they shoot a motivational video and post it on YouTube under a required hashtag. The candidates who have passed these stages are then individually interviewed via Skype.

Question: What a careful selection.

Natalya Demidova: Oh yes, we do this carefully, comprehensively, and for a long time. The competition is high, also among foreigners – it was even higher this year. This makes us very happy, and besides, the span of countries has grown.

Question: How many countries participated in the Summer Campus this year?

Natalya Demidova: Thirty-five, of which 31 were represented by participants, and others also by tutors and moderators.

Question: How is the work structured at the Summer Campus? What does its program include?

Natalya Demidova: In general, the concept is always the same. The first day is teambuilding and panel discussions as part of the official opening ceremony, introductory lectures or workshops from our leading experts. This year, RANEPA Rector Vladimir Mau spoke on the first day as usual; the following days included more focused trainings, workshops, lectures, and webinars.

However, the 2018 Summer Campus program was slightly different, and judging by the feedback, we have made the right choice. What was new? Disney, which offered a very interesting format for two days: developing the marketing strategy for an animated film, identifying its potential target audience, developing and creating characters, and also showing the film with its subsequent detailed discussion. Then there was the Soyuzmultfilm Day, when the participants had the opportunity to recall cartoons from their childhood (or watch them for the first time), to learn the history of Russian animation, and get an understanding of how commercially successful cartoons are made.

Question: Tell us more about the Liberal Arts system, please. Is it true that the students have to choose one lecture from two or three scheduled for the same time slot?

Natalya Demidova: This is an important feature of the Summer Campus. We often schedule three different interesting lectures for the same time, and the task of each team is to be represented at each of them, so that later, working as a group with their tutor, they would be able to collect the pieces into a general picture and apply the new information working on cases. It is very important for the tutors and moderators to join their teams and help the participants form a comprehensive vision.

Question: How do you decide who will be tutors? Or can the team choose?

Natalya Demidova:  We choose the tutors ourselves. A number of tutors have been working with us for years. Bjorn Stenvers has been with us for many years, and so have Kamil Kuramshin, Dragos Dorobat and Oana Contoman. These are experienced tutors. New members of the tutor team are usually selected based on recommendations. Actually, the task of the tutors is to provide conceptual leadership, guide the students by slightly changing their focus or the angle of perception, pointing out some new facets. Tutors by no means give value judgments on the participants’ opinions, only carefully suggest other points of view, opening up new horizons.

Question: All Summer Campus experts are leading Russian and foreign academics, civil servants, businessmen, and cultural figures. Who have been invited to share experience with the students this year? Who is the most iconic in your opinion?

Natalya Demidova:  All of them are iconic figures, so I would not want to single anyone out, to be honest. They do represent all the various areas at the Campus – education, business, and research. If you still want me to mention names, I certainly need to name RANEPA Rector Vladimir Mau, head of Disney Russia Marina Zhigalova-Ozkan, Director General of the Tsaritsyno Reserve Yelizaveta Fokina, actor Alexander Kuznetsov, publisher Irina Prokhorova, Honorary Vice-President of the World Dance Union Stanislav Popov, General Director of Vienna Ball Moscow Alexei Smagin, and designer Helene Elange. This year, former senior vice president of the Сoca-Сola Company Clyde Tuggle personally addressed the students and gave a videoconferencing workshop.

Question: What is the mission of the Summer Campus? What knowledge and skills do participants acquire?

Natalya Demidova: Ideas, values, knowledge. We have not found anything more succinct to describe our mission. The forum certainly contributes to the emergence of new ideas, also due to the new information and knowledge gained at the Campus. As for values, they involuntarily get altered in any case, already through being in a highly concentrated multinational environment.