National projects can increase the growth rate of the Russian economy 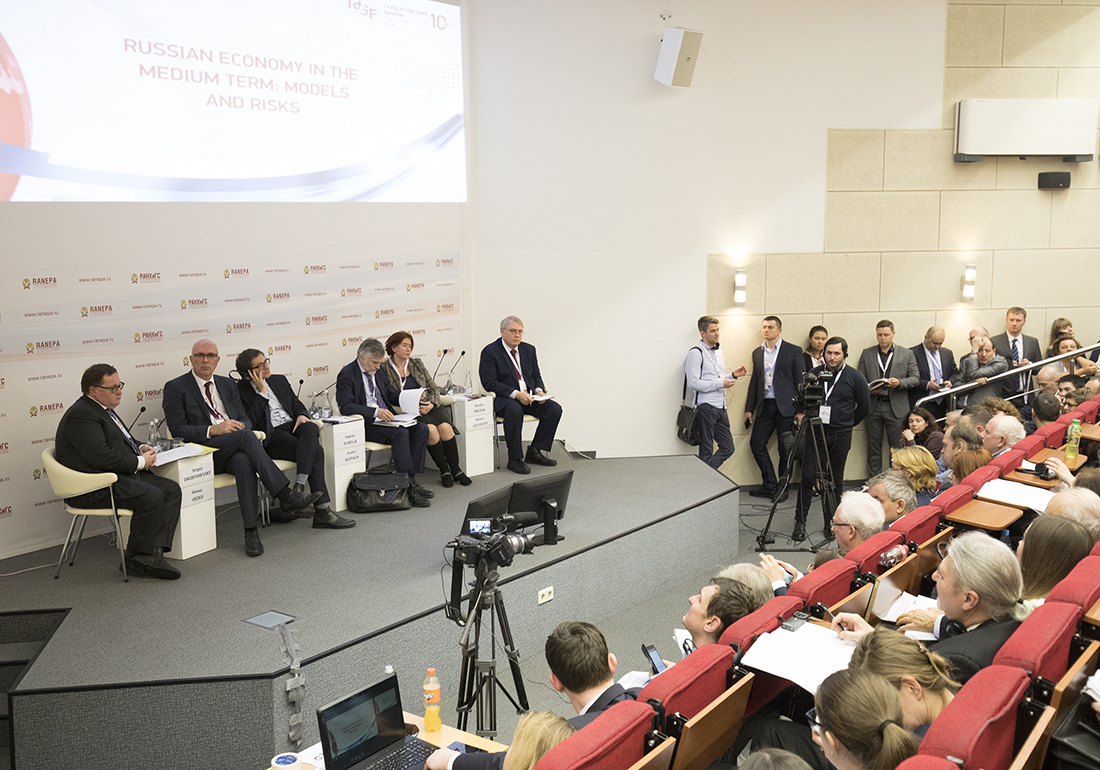 On the second day of the Gaidar Forum 2019, experts discussed the risks of implementing scenarios for the development of the Russian economy in the medium term.  Sergey Drobyshevsky, director for scientific work of the Gaidar Institute for Economic Policy was the moderator of the forum.

The expert discussion was opened by Alexey Vedev, Head, Laboratory for Structural Research, RANEPA, with a report titled: “Key risks of the socio-economic development of the Russian Federation in the medium term.” The speaker noted that “due to the growth of interest rates, due to the increase in the tax burden, due to an insufficient increase in the investment climate, private investment will remain at the level of the last 10 years, with the maximum of 2-3%, and the accumulation rate, that is GDP capital investments rate, will not reach 25-27%, but will remain at the level of 18-22%, and this is the main risk. He claimed that the threat of rising labor costs is another risk.

Gabriel De Bella, the head of the Permanent Mission of the International Monetary Fund in the Russian Federation, briefly described how the report is being prepared and what to expect in the January forecast.

In addition, he expressed his opinion: “The economy continues to have a significant growth potential of 1.5%, there is also a fiscal contribution, but it seems to us that fiscal measures will be more important in the second half of the year. At the same time, there are other factors associated with the global economy, and this impulse is not as strong as it used to be. In addition, there is definitely a certain slowdown in global financial markets. It may also affect a slight slowdown in growth in 2019 in Russia, but we do not think that the forecast will be greatly changed downward, and we believe that growth in 2019 will be close to the potential I mentioned. ”

Continuing the topic, Dmitry Belousov, Deputy General Director, NP Center for Macroeconomic Analysis and Short-term Forecasting, identified groups of goods that can enter the world market. The speaker focused on several major growth potentials: the market for new IT products, the engineering industry, the market for cars and new products.

“National projects can give a significant impetus for the growth of the Russian economy and for solving a number of point structural problems,” said Andrei Klepach, chief economist and deputy chairman of VEB.RF, the state-owned development corporation.

Natalia Akindinova, Director of the Center for Development of the National Research University Higher School of Economics, expressed her point of view: “Small business's potential in the medium term is not sufficiently revealed in the Russian economy, and, on the contrary, there are many measures that suppress small business. To achieve the target scenario, major changes must occur in the dynamics of aggregate factor productivity, and this is primarily affected by the relationship between the public sector, between the large business sector connected with the state, which historically has a high degree of monopolization and a large degree of generally recognized inefficiency".

Oleg Vyugin, Chairman of the Supervisory Board of the Moscow Exchange, noted what the main advantages of fiscal rule are, and how effective defensive model strategy is.

Natalia Orlova, Chief Economist, Head of Alfa-Bank Macro Insights, focused on assessing the potential growth rate, suggesting that the estimates create a "trap of expectations", and it is rather inconvenient to make predictions because of the risks at the present time, so it’s preferable to look at the current given.
“The severity of possible risks may be underestimated,” said Alexey Devyatov, chief economist at Uralsib Capital.

At the end of the expert discussion, the speakers expressed their opinion on what forecast they expect by the end of 2019.