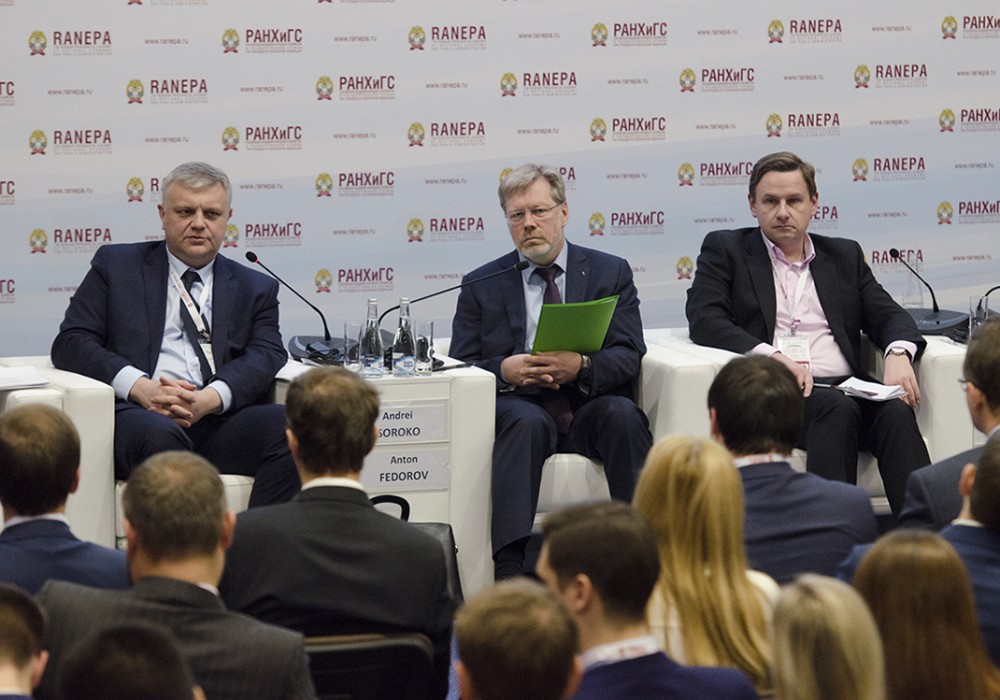 On January 15 at the Xth Gaidar Forum a panel discussion took place, which was devoted to one of the basic principles of the functioning of the civil service in most countries – continuous professional development.

Anton Fedorov, Chief of the Presidential Civil Service and Personnel Directorate opened the panel discussion, saying that at the moment the personnel problem is the main problem in the area of professional development of civil servants. He emphasized the value system, without which hardly anything will be made in the public service and in which two synchronous goals exist – serving the community and protecting the interests of the state.

Concerning the topic of reeducation and vocational training, we must offer civil servants conditions for the continuous development and improvement of knowledge and skills that will enable to get such training without interrupting current activities,” — Anton Fedorov also noted. He also added that it is necessary to create a system that would allow to continuously improve professional skills.

The speaker paid special attention to the fact that the mechanism for the development of the following measures is being implemented right now:

At the end of his speech, Anton Fedorov proposed to include the following subject for debate within the this discussion:  “In your opinion, what could motivate civil servants to constantly self-develop?”

Andrey Soroko, Director of Government Department of Public Administration and Personnel of the Russian Federation gave a report on “Professional development of civil servants as a system and personnel technology”. He stated that professional development, considered as a system and personnel technology, involves supplementary education and other related activities.

Such system approach will provide an opportunity for every civil servant to update their knowledge in due time for the duration of civil service, to gain new skills and to develop professional and personal qualities in order to maintain and improve the skill level for the proper execution of their official duties.

Andrey Soroko gave a detailed description of the concept of forming a single specialized information resource to provide opportunities for professional self-development. At the end of his presentation in response to a question: “What is better – full-time or remote training?” he expressed his opinion in this manner: “For a selective and fast acquiring of qualitative knowledge, the option of remote training is the most popular”.

Irina Makiyeva, Deputy Chairman of the government-owned development corporation VEB.RF, Director General of Non-Profit Organisation Foundation for the Development of Single-Industry Towns stated: “Recognition is more important than money,” explaining that it is important to gain recognition of the results of your work not only in the workplace, but also on the territory, from citizens. It is important that the residents of the city, municipality perceive your actions correctly and understand that everything you do is for them.

In addition, she expressed her opinion that you need to learn constantly, and flexible skills are most important in the civil service. Regular internships are also required for work, and not only in your city.

Continuing on the topic,  Andrei Betin, Deputy Governor, Deputy Chairman of the Government of the Nizhny  Novgorod Region, expressed his opinion regarding horizontal links, saying that they are always necessary, and they can and should be realized through internships.

Answering a question about the motivation of state civil servants, he expressed the following position: “At the present moment, motivation occurs starting from the selection of the digitalization assessment and ending with mentorship”.

“It is necessary to think 10 years ahead regarding educational problem,” – noted Huanghuon Cho, Professor of the National Human Resources Development Institute of the Ministry of Personnel Management, Republic of Korea.

Vice Rector of Sberbank Corporate University, Igor Baranov expressed his opinion in response to a question: “Professional teachers or practitioners?” saying that “in reality it is like 50% of gray. There are academic teachers who base teaching on case-solving, and there are practitioners that work using the format of lectures, and for all that there should be a combination and competent presentation of knowledge.”

In addition to the response of Igor Baranov’s answer,  Huanghuon Cho expressed his opinion: “We want different points of view, different approaches to civil servants training.»

Natalya Garkusha, Director of the Project Management Agency of the Financial University at the Government of the Russian Federation, the lecturer of RANEPA, spoke on the motivation of state civil servants, saying that the greatest level of motivation is among athletes, because they are constantly in competitive situation, competing with each other.