HomeNewsNews Olympic champion Yevgenia Kanayeva about RANEPA: Happy to have been a part of it

Olympic champion Yevgenia Kanayeva about RANEPA: Happy to have been a part of it 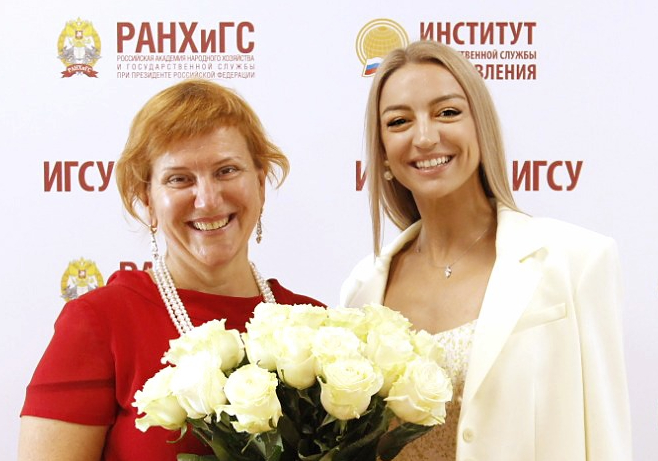 Rhythmic gymnast Yevgenia Kanayeva, two-time Olympic champion in 2008 and 2012, winner of 17 world titles, got her Master’s degree this year from RANEPA Institute of Public Administration and Civil Service (IPACS), the Public and Municipal Administration System program. In an interview below, she shares why she chose the Presidential Academy and how she plans to use her new expertise.

- Why did you decide to get a Master’s from RANEPA?

- Two years after I finished my sports career, I began thinking about getting a Master’s. When you practice eight hours a day, you don’t even have time to think about anything else, but when I left that behind, I suddenly had time and an interest in moving on. I was a coach and vice-president of the Russian Federation of Rhythmic Gymnastics, and I already had a Master’s from the Lesgaft National State University of Physical Education, but I knew I lacked management skills.

One of my colleagues suggested I met with professors from IPACS RANEPA. We had a very detailed and rewarding conversation; we discussed which field of study I should choose based on my career interests. I chose the Public and Municipal Administration System course.

- What useful knowledge and skills did you gain?

- During this course, I developed a holistic perspective on the public administration system, its functions structure. The program included various disciplines concerning economics and political science, as well as profound legal training. Anyone who wants to start their own business needs to know all this.

- Are you planning to start your own business?

- Honestly, yes. When I dreamed of earning a RANEPA degree, I primarily thought about opening my own school of rhythmic gymnastics. I am gradually moving towards my goal – working with the national team takes a lot of time, but I try my best to combine it all.

- How did you get on with the other students? What was their reaction to being on the same course with an Olympic champion?

- I had wonderful classmates. All of them happened to be older – fascinating, successful people, motivated for career advancement. We were very friendly and supported each other all the way. The general atmosphere at RANEPA is very friendly and engaging. I'm just happy to have been a part of it.

- Do you plan to continue your studies at the Presidential Academy, maybe choose another program?

- I am quite young at 31. I have a son, a job I love, a dream about my own school, and it’s not so easy to combine it all. But you know, I feel like someone who has just gained strength and reconsidered their attitude to life. This means anything’s possible – I do not rule out that a time will come when I will return to the Presidential Academy to learn something new.