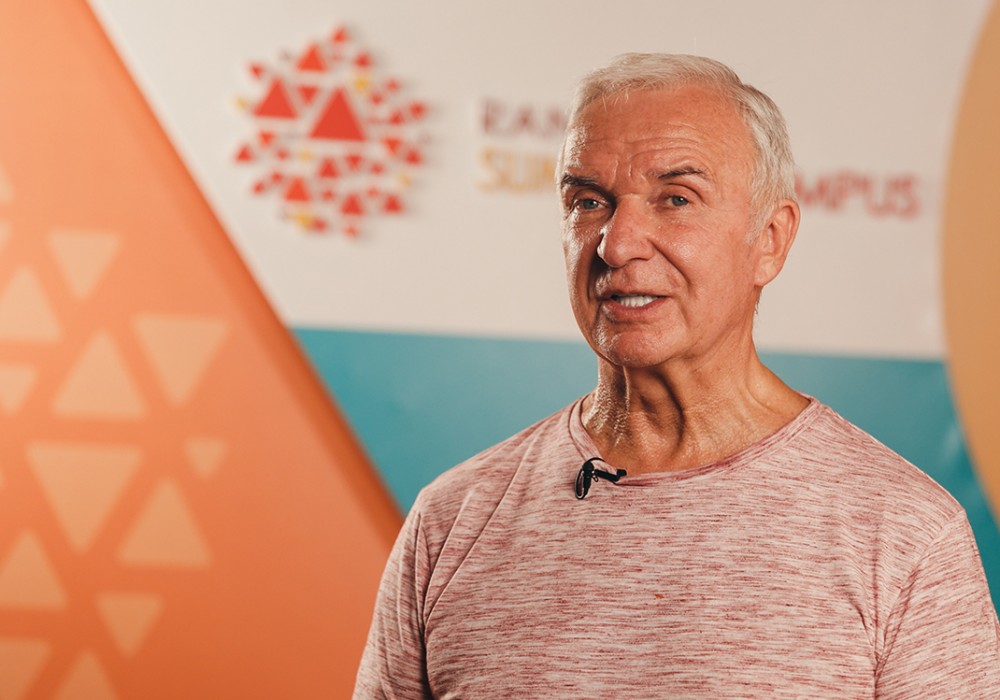 On July 21, at the RANEPA Summer Campus, the President on the Russian Dance Union, Vice President of the World Sports Dance Federation Stanislav Popov delivered a speech.

At the lecture, the participants got acquainted with the exciting world of dance. The speaker told about the development history and difficulties experienced by the dance in our country in different periods.

As noted by Stanislav Popov, dance is not just a way to arrange your leisure, but also an important way of self-expression and communication, i.e. a cultural indicator of human development. First dance originated in the times of primitive people: tribes used dancing during sacrifices. So people express their emotions and feelings, this function is preserved to this day.

The speaker devoted the major part of his lecture to social dances - a dance type that prevailed in the 18th-19th centuries. This era is known for grandiose balls where the secular elite of the society came together. These balls were a special occasion in the life of a nobleman, they took place in magnificent palaces illuminated by thousands of candles and were particularly romance: guests danced the night away, read poetry, made new acquaintances.

Dance has always been a dynamic phenomenon: fashion and trends changed every 20-60 years. Stanislav presented some kinds of dances, for example, pavane, a slow dance of the 13th century. Later in the Baroque era, minuet, a couple dance, gained popularity to prevail in Europe for 50-60 years.

The second part of the lecture was devoted to the history of dance development, mainly in Russia. Western dance in our country often faced various bans and restrictions due to ideology and values. In the era of the reign of Paul I, waltz was prohibited because of overt movements. In the Soviet era, for the same considerations, a Latin American dance cha-cha-cha was banned.

Stanislav Popov and his daughter Anzhelika demonstrated and studied with participant the movement of the dance.
The idea of dance choreography standardization first emerged in the 20th century. Today in any dance club of the world, the waltz is taught in the same way. Hence the idea came to name the lecture The Dance: Esperanto in the World of Movements, because the movements of a certain dance are the same in any country and make it possible express feelings through them accessibly.

The first dance championships were held in Europe in the 1950s, at the same time, the first official organizations for their conduct emerged. In the Soviet era, dances were seen solely as a set of movements and choreography. Cultural figures of this era were constantly under the yoke of dictatorship ideology and could not freely engage in their favorite creativity. The lecturer shared with participants his difficult personal experience of participation in the first international championships in the history of the Soviet Union, when foreign trips were few.

Positive changes in the dance industry occurred with the advent of the last General Secretary of the Central Committee of the Communist Party of the Soviet Union Mikhail Gorbachev. Stanislav Popov told that a future head of the USSR himself met his one and only through dancing: they met in the student circle for ballroom dancing.
The speaker noted that the dance industry is a promising and yet unsaturated area.  He expressed the hope that after the lecture the participants will zoom in this area, and perhaps think about their own projects.