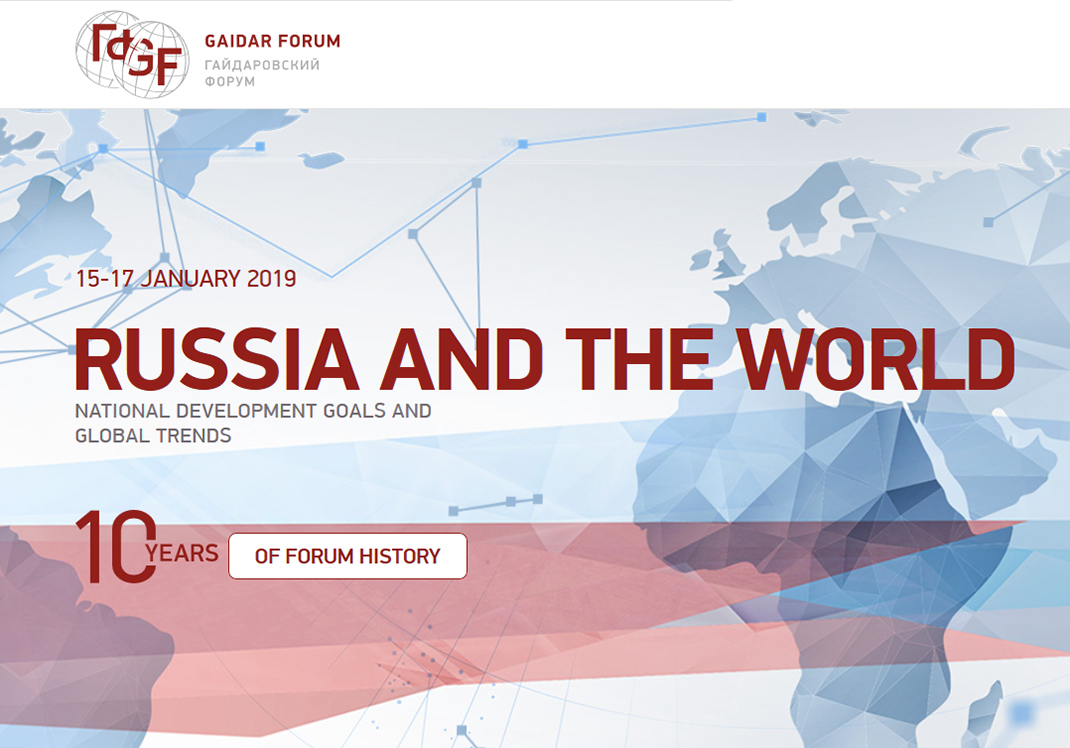 The 10th Gaidar Forum, to be held at the Russian Presidential Academy of National Economy and Public Administration (RANEPA) on January 15-17, 2019, will unveil new books by economist Vito Tanzi and Columbia University Professor Adam Tooze.

On January 16, the Forum will host the presentation of two books by economist Vito Tanzi, former Director of the IMF Fiscal Affairs Department (1981-2000), expert on tax policy and its impact on economic development and Honorary President of the International Institute of Public Finance (IIPF).

In Government Versus Markets: The Changing Economic Role of the State, released by the Gaidar Institute, the author examines the economic role of the state in the 20th and 21st centuries from a broad historical and world perspective, addressing the fundamental question of what governments should do, or attempt to do, in economic activities, and what they are likely or may be forced to do in the near future. The book contains a large set of statistical information that should prove useful to policy-makers and scholars in the discussion of government's optimal economic roles, and can serve as a good reference work on the analytical borders between the market and the state, and on what a reasonable exit strategy from the current fiscal crises should be.

In Termites of the State: Why Complexity Leads to Inequality, Tanzi offers a comprehensive description of the industrialized world's economic development during the 20th century to today. In the tradition of grand economic histories, Tanzi connects the biggest issues of the modern world including extreme gaps in income distribution, increasing complexity of government actions and regulations, and asymmetry of access to information and to political influence between the elite and the rest of society.

The economist describes the growth of state intervention since the early 20th century. He examines how and why laws and regulations have expanded in industrialized economies, and, building on this, explains the forces behind the precipitous rise in global inequality.

Three books by Adam Tooze, History Professor at Columbia University, will be presented on the same day. Tooze is a specialist in the economic history of Germany, the author of numerous works on the political, intellectual, economic, and military history of the 20th century.

The Deluge. The Great War and the Remaking of the Global Order, 1916-1931, in which the author offers a completely new perspective on World War I, focuses on the final years of the conflict and its consequences until the Great Depression when hopes for a long peace and liberal internationalism were challenged by violent upheavals and the emergence of totalitarian regimes. At the same time, a new world order emerged, in which all the major powers, both victorious and losing the war, were forced to link their future with the United States, the leading economic force of the world.

In his second book to be presented at the Gaidar Forum, The Wages of Destruction. The Making and Breaking of the Nazi Economy, the author considers the idea that the 20th century European tragedy could have been rooted not in Germany’s strength, but in its weakness. He offers a fundamentally new account of World War II, taking into consideration the German economy of that period, along with racial relations and politics.

The book Crashed: How the Decade of Financial Crises Changed the World is about the 2008 crisis. While President George W. Bush still talked about the financial crisis as a local incident on Wall Street, it was gaining momentum and affecting the whole world, from the financial markets in Great Britain and Europe to factories and shipyards in Asia and the Middle East and South America. In the United States and Europe, it caused a fundamental revision of capitalist democracy, which ultimately led to a destabilization of both Europe and the United States.