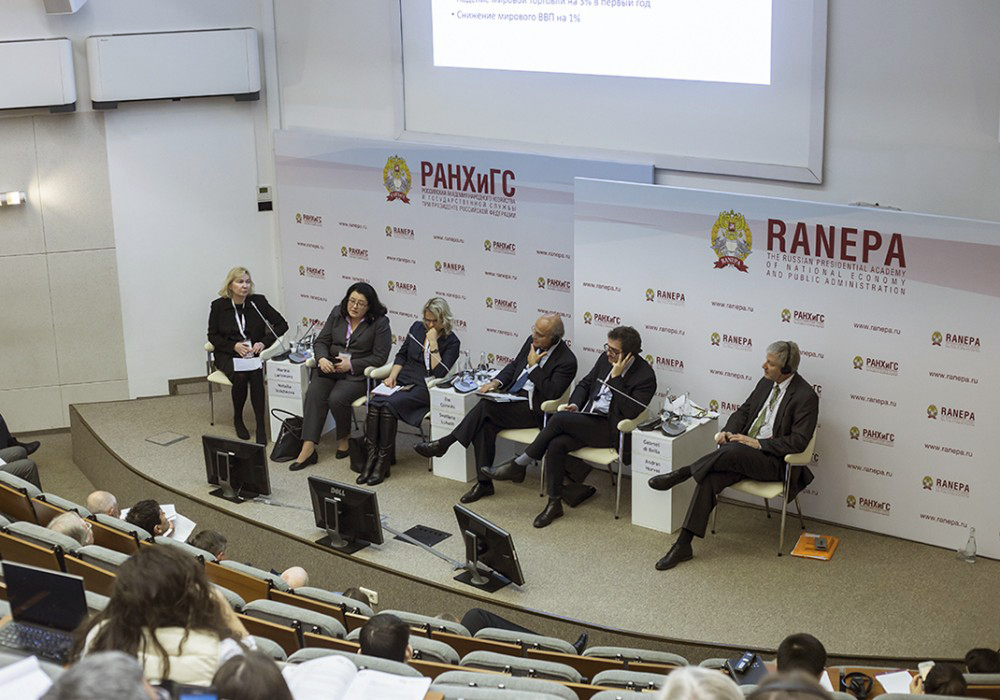 On the first day, the anniversary 10th Gaidar Forum discussed the achievements, challenges, new risks and future priorities of the G20. The discussion was moderated by Marina Larionova, Director of the Center for Research of International Institutes of the RANEPA.

Ms. Larionova outlined the problems that the G20 is dealing with and has already coped with. So, one of the global problems for the G20 today is the rise of protectionism, sanctions and the risks of their extraterritorial use.

The next speaker, Sherpa in the G20, Svetlana Lukash, Deputy Head of the Presidential Experts Directorate focused on global trends affecting civilization and the global economy. She stressed that the priorities for the G20 are trade and the digital economy. In addition, this year it is planned to pay more attention to the challenges that previously did not attach special importance: population aging, climate change, in-depth analysis of the digital economy and new risks in various economic areas.

Gabrielle di Bella, Head of the Permanent Mission of the International Monetary Fund in the Russian Federation, believes that the G20 should also solve the tax evasion problem.

The first vice-president of Gazprombank, Denis Shulakov, raised the issue of using capital markets and stressed that such markets are a very disciplined area of finance, requiring transparency for effective work. According to the speaker, local capital markets can only develop through the adoption of international rules and advanced technologies and their interweaving.

The issue of the main risks of the G20 was raised by Martin Gilman, Professor of the National Research University - Higher School of Economics He drew attention to the enormous level of debt, which is 60% higher than during the global financial crisis. Therefore, the main task for the G20 is to manage risks and minimize them, because the consequences may be irreversible.

Natalia Volchkova, Professor, New Economic School (NES), made a detailed analysis of the difficulties that the G20 is facing today. The main emphasis was placed on the growth of protectionism. Since 2012, global trade has been growing more slowly than global GDP. Thus, it affects the share of exports of countries subject to protectionist measures, leading to a deterioration in trade and economic prospects. According to the speaker, the G20 does not pay enough attention to the WTO (World Trade Organization) problem. Since the WTO cannot reform itself, countries must agree to achieve the most effective results.

As a result, it was noted that a possible solution of problems to which the speakers paid attention during the discussion could be the unification of countries to form new rules in the system of international economic institutions.