HomeNewsNews Prospects for the financial sector in Russia (VIDEO)

Prospects for the financial sector in Russia (VIDEO) 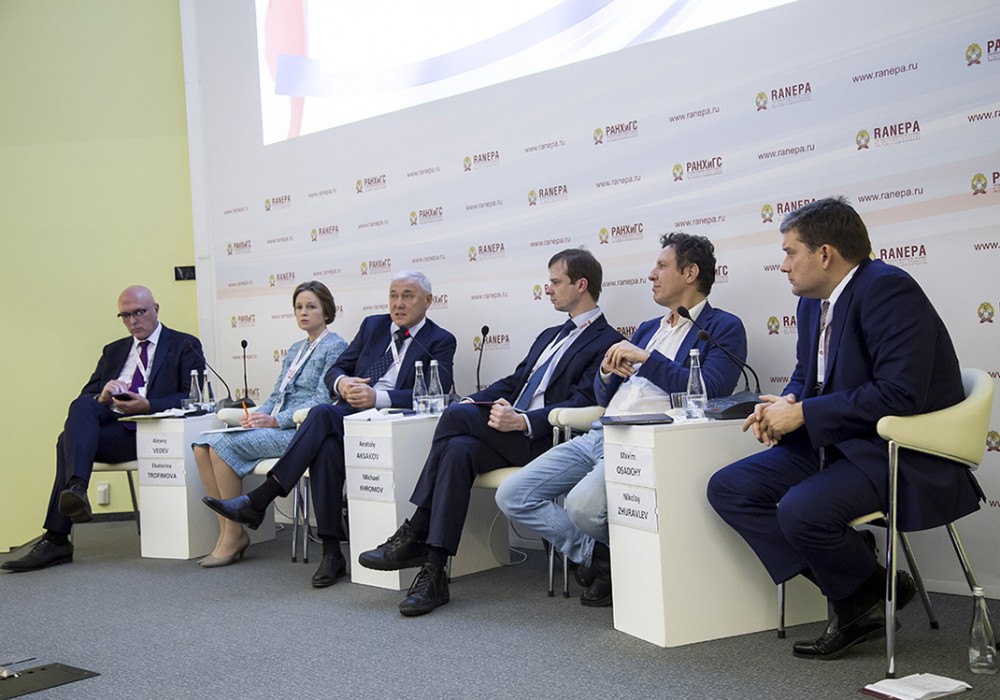 On the first day of the Gaidar Forum, an expert discussion on the problems of the financial sector in Russia took place. Chairman of the Financial Market Committee of the State Duma Anatoly Aksakov, First Deputy Chair of the Federation Council Committee on the Budget and Financial Markets Nikolai Zhuravlev, Director General of Analytical Credit Rating Agency Ekaterina Trofimova, member of the Board of CFB Bank LLC Maxim Osadchy, as well as employees of Laboratory of Structural Studies of RANEPA Aleksey Vedev, Yuri Danilov and Michael Khromov discussed development goals and perspective models of the Russian financial sector, links between financial development and economic growth, issues of strategic financial planning.

Continuing the thought of a colleague, Yuri Danilov noted that the state policy of financial development in Russia does not exist as a separate national strategy, unlike developed and successfully developing countries, where it is considered as one of the most important factors of socio-economic development.  The result of this neglect was a depression in the Russian stock market and growth in the bond market. Thus, “Russia loses Kazakhstan and Romania in the opportunities to attract investments in the stock market,” Danilov stated.  To solve existing problems, the expert proposed a program of reforms of the financial sector, based on the concept of balancing alternative parameters of financial development — depth, inclusion, effective competition and stability, and noted the importance of reforming the non-banking financial sector.

Anatoly Aksakov supported Yuri Danilov's proposal to link pension savings to individual investment accounts to solve the problem of formation of private pension capital and and invited him to present this idea at the upcoming parliamentary hearings with the participation of representatives of the Central Bank.

Maxim Osadchy presented statistical data that show that the priority goals for the development of the Russian financial market, approved for the period 2019-2021, may not be fully realized.

Experts agreed with Ekaterina Trofimova's opinion that the financial sector in Russia is mainly represented by the banking sector, as banks are the main investors in the Russian market, which is not quite typical for most developed countries. “We are waiting for the rapid growth of the insurance and pension market all the time, and, undoubtedly, the regulatory factor plays a huge role here. Still, we must not overlook that it's not that bad in Russia, because it is difficult to try to formulate a strategy for the development of the financial market without analyzing the macroeconomic situation, because the financial market is as bad or good as the economy is in its broadest sense,” noted Ekaterina.  She compared the banking and financial market with a mirror of negative economic phenomena, which is responsive to changing demographic conditions and often anticipate new economic trends.

Ms. Trofimova presented a list of key trends in the Russian banking system until 2024, including the further growing importance of state-owned banks, “clearance” of the banking sector, maintaining a structural liquidity surplus, and a high level of problem debt. The expert also stressed that thanks to the state support it was possible to preserve the banking system — the circulatory system of the Russian economy, but further development is vital. “Stability is ensured, there is a lot of liquidity, the state has been supporting the financial sector, but over the past 20 years the content of my presentations has not changed. I would like to tell you about something new!” — said Ekaterina.

Experts agreed on the lack of competition in the Russian banking sector and the need for its demonopolization. To solve this problem, Nikolai Zhuravlev suggested stimulating state-owned enterprises to be credited in private banks, obliging banks to be included in the system of fast payments and introducing regulation of monopolistic players in the banking sector in the same way as in the energy sector.