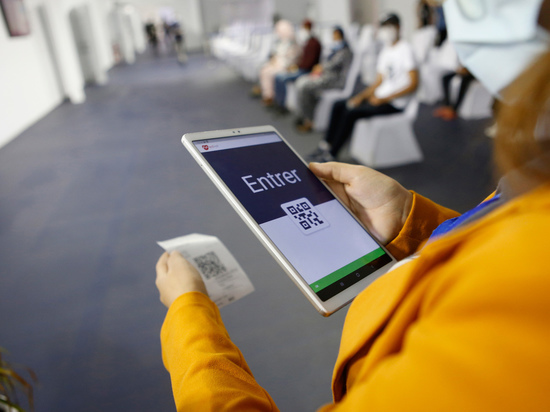 The Russian government has submitted to parliament a bill that will introduce mandatory QR code passes to access public areas; State Duma deputies are to consider it in the first reading after December 14. If the new legislation is passed, from February 1, those wishing to visit public places like shops and restaurants will have to prove they have been vaccinated, have recovered from the virus or have medical conditions that prevent them from getting vaccinated.

The new mandate will not apply to grocery stores or pharmacies. However, the move has caused a split in society as some have accepted the new rules of conduct while others haven’t. There is even more controversy internationally, although immunity passports are largely seen as inevitable. The painful topic continues to be debated.

Many countries have opted for introducing scannable QR codes. China introduced such passes in April 2020, and people have to present them at nearly every indoor space they visit. In Italy, immunity passports are mandatory for entering public and private enterprises and educational institutions, for visiting crowded venues and restaurants, and using public transport. In France, a QR code is required at medical centers, restaurants, on transport and for attending public events. At the same time, Covid-19 vaccine mandates are in place for all employees interacting with clients.

Experts estimate that, with the new strains emerging and vaccine efficacy being below 100%, 80-90% of the population may need to be inoculated to end the pandemic. This level of vaccination will be difficult, if not impossible, to achieve solely by relying on civic initiative. In most countries, the introduction of digital health passes created much debate among the population, with protests erupting in Italy, France and Switzerland.

It should be noted though that the unpopular measure has nevertheless led to an increase in vaccinations. As of the end of October, 81% of Italians over 12 were fully immunized; in France, about 88% of adults and 85% of children over 12 had received the first component of the vaccine.

One of the lowest vaccination rates was recorded in Austria where only about 70% of all citizens had had the shots. As a result, on November 15, Austria had to impose a ten-day lockdown for those who had not been vaccinated. It was later extended to the entire population, and the government intends to mandate vaccination from February 1.

New Zealand and the state of Victoria in Australia are using QR codes to track the spread of the virus. In New Zealand, digital health passes are required to enter buildings, buses, ferries, taxis, and trains. Customers and visitors scan the code from special QR code posters using the NZ COVID Tracer app on their phones or they can enter data manually. The app uses Bluetooth to receive alerts if an infected person is nearby. The app is secure and does not transmit any personal data until the user shares it or is diagnosed with COVID-19.

China also uses a mandatory tracking system, but it is very different from the one used in New Zealand and Australia. All people are assigned a color code — green, yellow or red — that indicates their health status. Green means the user can move around without restrictions, while a person with a yellow status can be asked to self-isolate at home for seven days. At the same time, a QR code is required to enter most public institutions. Color codes are changed automatically, although the criteria have never been publicly explained.

In March 2021, China also introduced digital health certificates, which contain information on the user's vaccine status, as well as their COVID-19 test results. The Alipay Health Code app uploads personal data such as the person’s location, city and an identifying code number to a server; some of this apparently gets sent to the police.

Having embraced the need for immunity passports, certain countries have tried to move towards convergence of standards for their use. For example, Turkey and Switzerland are already using the same standard as the EU, and India's vaccine card system has been extended to Sri Lanka and the Philippines. The system of scannable QR codes enables holders to visit public places in their country as well as to travel freely across borders.

In mid-November, the European Union launched the EU Digital COVID Certificate (EUDCC) to be used as a COVID pass in 27 EU countries. The system facilitated travel, helping to exempt holders from restrictions such as quarantine or additional tests upon arrival to another country. Twenty-two more third countries (Switzerland, Iceland, Norway, Liechtenstein and others) have agreed or are in talks on mutual recognition of their local certificates and the pan-European EUDCC.

UK’s accession to the EUDCC system has slowed for now as users can choose between a QR code from a mobile app, one on the National Health Service (NHS) website, and a certificate letter from their healthcare provider. It will take time to reconcile these two systems. At the same time, it is not entirely clear how, for example, the United States could join the health pass system after President Biden promised not to create a central database for immunizations.

Another problem with standardizing covid passports is that QR codes in different countries link to different information depending on the healthcare system and the degree of data confidentiality. In the UK, scanning a QR code provided by the NHS returns one symbol, a check mark or a cross to indicate the holder’s status. Chinese digital passports contain far more details.

People are concerned about disclosure of their personal health information. Even in countries with relatively high vaccination levels, support for vaccine passports ranges from 52% in Hungary to 84% in the UK, according to The Economist. At the same time, the black market for the coveted QR code certificates is flourishing. In France, a vaccine card can be purchased on the Darknet for as little as 75 euros.

To make the health pass system consistent, The Economist notes, there needs to be consistency across countries on what kind of health information to include and how to label it consistently. This seems to be relatively easy to accomplish when the process is managed by a single agency such as the World Health Organization (WHO). However, in fact, even building a unified system for verifying health authorities’ digital signatures is expensive and complicated. At the same time, the WHO officially refused to participate in validating and verifying vaccinations, and only published guidance recommending the minimum data for a certificate.