On December 5, the Russian Presidential Academy of National Economy and Public Administration (RANEPA) hosted a workshop on academic reputation and global rankings of universities, organized by RANEPA Research and Information Development Department and the World Bank.

Vice Rector Maxim Nazarov opened the meeting and welcomed the participants. The idea of ​​holding this event did not emerge spontaneously, he said, but had been discussed at the Academy for the last six months. “I am asking you all to engage in an open discussion, because this is a workshop rather than a conference,” Mr. Nazarov said. “We have already agreed with colleagues that promoting social and humanitarian universities has its own specifics, in contrast to medical or technical schools.”

Senior Education Economist in the Europe and Central Asia Human Development Sector of World Bank Cristian Aedo addressed the participants, noting that this work is an important part of developing the partnership with Russia in general and Russian universities in particular.

The discussion was moderated by Francisco Marmolejo, Coordinator of the World Bank's Network of Higher Education Specialists. The expert said he is confident that academic reputation is of interest to all those working in higher education without exception. “Why do universities seek to improve their academic reputation?” Mr. Marmolejo asked the audience.  “Many people use the term ‘world-class university,’ but few know what it means.”

The answer to this question came from Philip Altbach, founding director of the Center for International Higher Education in the Lynch School of Education at Boston College, who spoke about the ‘center vs. periphery’ theory and what steps should be taken by non-English speaking universities to evolve from local leaders to full-fledged participants in the global process. The expert noted that, during the time of the Iron Curtain, Soviet universities occupied a central place in the educational landscape of Eastern Europe and beyond – many students came here from Africa and Asia in search of quality education, such as engineering or medical degrees.

At this stage, Russian universities are not in a position to compete on an equal footing with Western schools, and the main reason for that is the shortage of research publications. This shortage is due to the fact that Russia had traditionally delineated research and educational activities, with research mainly conducted at research institutes. Mr. Altbach also mentioned another important criteria for being included in the global process – the school’s internationalization and fluent use of the English language, primarily by the professorial staff and then by students.

Professor Ellen Hazelkorn, Director of the Higher Education Policy Research Unit at Dublin Institute of Technology, explained in detail how the global university rankings are compiled. No university can ignore the rankings, the expert stressed. “Even Yale has to worry about where it stands,” she said. There are only a few global rankings, and being on one plays an important role for the University – above all, the QS, the Times Higher Education ranking, Webometrics, and the Shanghai ranking.

The expert paid special attention to specific measurements used for the global rankings. She made an important remark here: the compilers of the ranking take into account research in the field of medicine or, for example, biology, but socio-cultural studies are not evaluated, because their importance is very difficult to estimate. The compilers also use opinions given by students and faculty, and take into account the reputation, but never measure the level of satisfaction of students and graduates, or the quality of teaching.

Ms. Hazelkorn separately noted that it is very difficult to measure a school’s activity, so they often use the results of surveys, which are calculated on the basis of subjective assessments. Therefore, the expert summed up, universities in pursuit of first places in the rankings are at risk of losing their individuality. For example, a university aims to explore its weaknesses and actively develop the areas it is not keen to work in. As a result, the attempt to improve its position on international rankings negatively affects the university’s individual climate. “The rankings can be used as an element of quality assurance,” Ms. Hazelkorn said. “But they should not be used as a tool for self-assessment.”

Apart from the rankings, the global educational community also has accreditation. Without the accreditation from major associations of business education schools, it is very difficult to prove a school’s educational worth. There are the AMBA, ACBSP and AACSB accreditations. It should be noted that in this respect, the position of Russian universities is much more robust than in the global rankings. For example, several RANEPA departments, including the Graduate School of Corporate Management, the Institute of Business Studies, and the Kingston/RANEPA MBA and EMBA programs, have the AMBA and ACBSP accreditation.

The participants also had the opportunity to browse through the fresh issues of professional journals Ekonomicheskaya Politika [Economic Policy], Sotsiologiya Vlasti [Sociology of power], Gosudarstvo, Religaya i Tserkov v Rossii b za Rubezhom [State, religion and the Church in Russia and abroad], Ekonomika Nauki [Economics of Science] and Krestyanovedeniye [Agrarian Studies]. 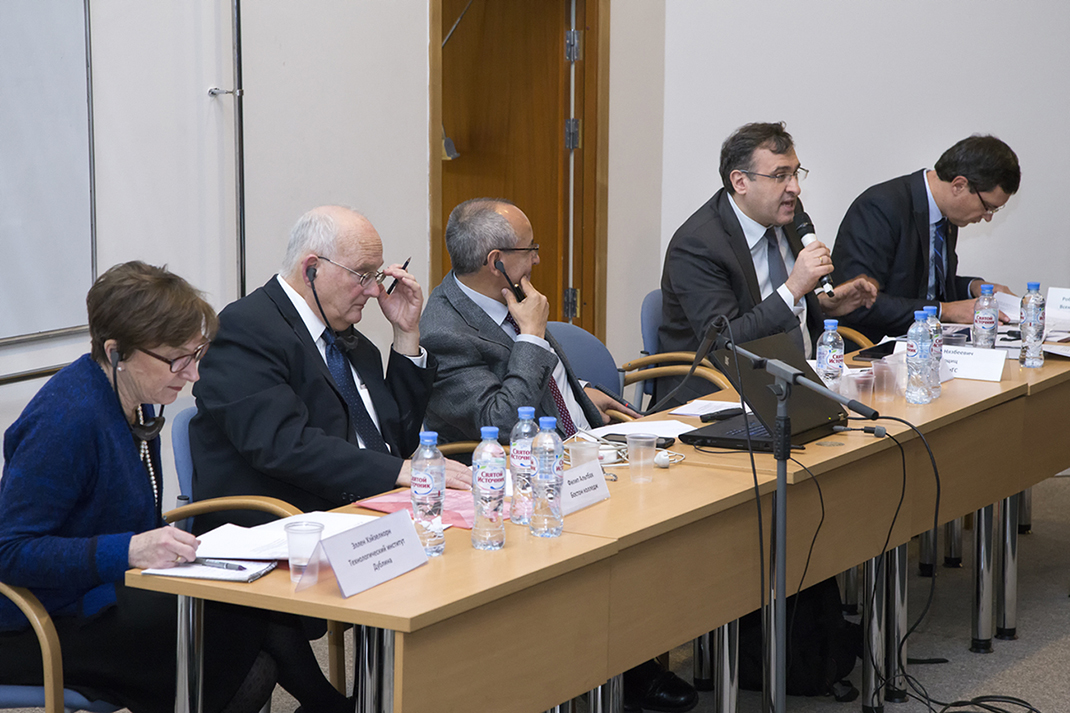