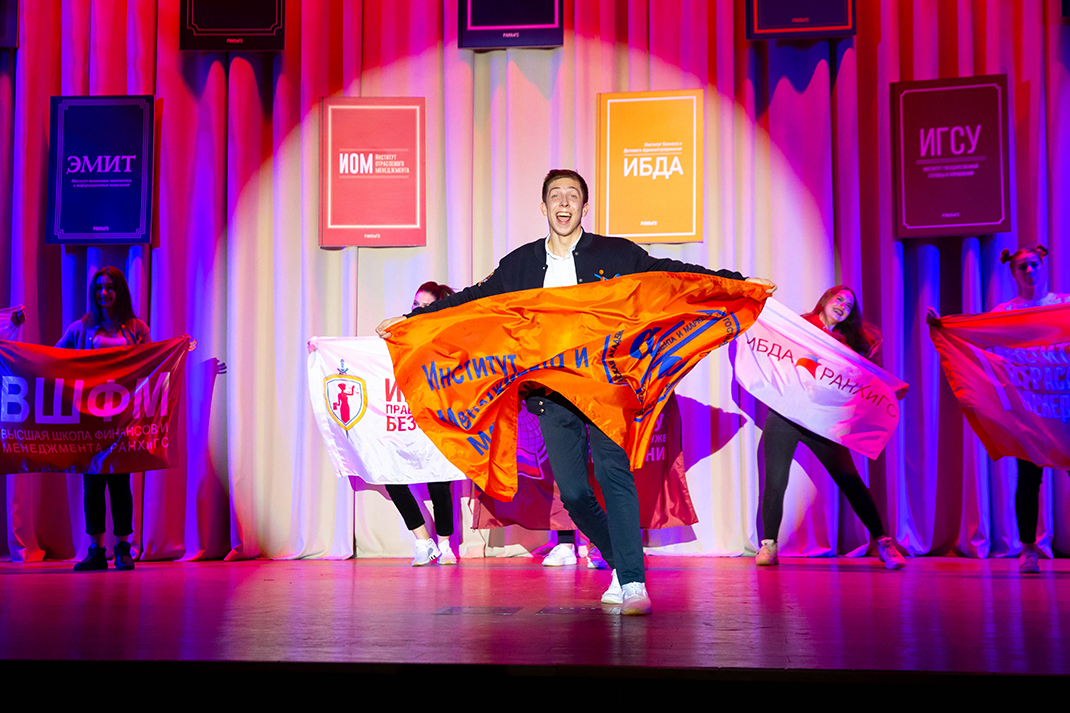 On 31 October and 1 November at 2018 Student Concert Party at the Presidential Academy, students presented a variety of skits.

The Academy has once again plunged in the magic atmosphere: bright stage, music, full audience and noisy support teams. All RANEPA students wait for this holiday, because for many it is a favorite event of the fall. This year, the emphasis was made on the friendship of activists of different graduating classes, experience sharing and continuity of generations.

This time, the students presented each Institute and Faculty as a separate chapter of a great historical book. The new generation appends its pages thereto, and the heritage of the Academy students is accumulated year after year.

During the first day of the Party, the viewers have “read” 6 chapters: Institute of Business Studies (IBS), Higher School of Finance and Management (HSFM), Institute of Industry Management (IIM), Graduate School of Corporate Management (GSCM),  Institute for Social Sciences (ISS) and Department of Finance and Banking (DFB). Students of institutes and faculties presented a fiery mass dances, songs; some of them showed original theatrical performance, others have made complex costumes.

On the second day, the skits were presented by students of Institute of Public Administration and Civil Service (IPACS),  Institute of Economics, Mathematics and Information Technology (EMIT Institute), Institute of Law and National Security (ILNS),  Faculty of Economic and Social Sciences (FESS) and Institute of Management and Marketing (IMM). Each “chapter” of the book proved to be unique. Viewers saw LED costumes, inflatable dinosaur, original dances and fascinating general performances.

Not only the teams surprised the audience at the festival. The big surprise was the videotaped addresses from graduates. Ex-presidents of student councils, project managers, contest winners and other people important for each Institute and Faculty congratulated the freshmen from the main stage.

Traditionally, the Student Concert Parties have no single winner. Each team can consider themselves as such simply because the participants did a great job and have gained invaluable experience. Nevertheless, the organizers noted the most original, funny, bright and sincere skits in various nominations. The institutes’ cheer teams also got their prizes: following the results of the first day, a prize was awarded to the Institute of Industry Management fans; on the second day, the Institute of Management and Marketing fans were recognized the best among other cheer teams.

Student Concert Party is a big deal, which every year offers a great opportunity for a new generation of students. These parting words were said at the end of the festival by Ivan Fedotov, the Academy Provost, and Alexei Spirin, Head of the Department of Youth Policy.