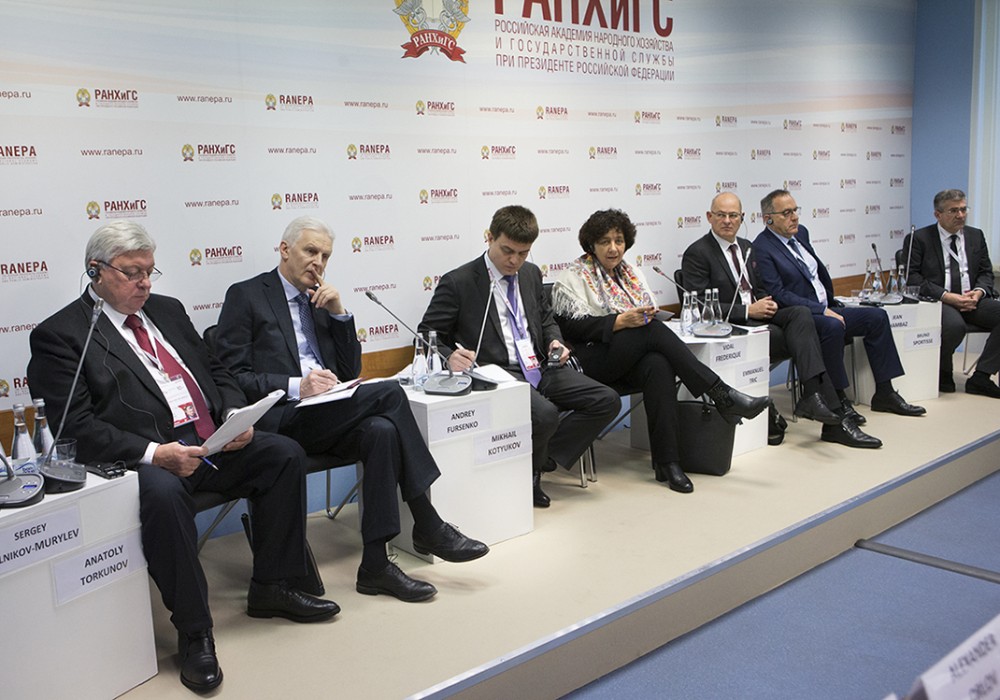 Starting the expert discussion of the Trianon Dialogue held on the second day of the 10th Anniversary Gaidar forum, its moderator Andrei Fursenko, Assistant to the President of the Russian Federation, invited the experts of the two countries to designate the most relevant avenues for cooperation between Russia and France in the field of education, science and intellectual development.

Mikhail Kotyukov, Minister of Science and Higher Education of the Russian Federation, answering the Moderator’s question, noted that the signing of the roadmap agreement between Russia and France on the sidelines of the last year Saint Petersburg International Economic Forum had been based on significant previous experience in the development of collaborative laboratories and the implementation of collaborative educational programs. The roadmap provisions the scientific and technological cooperation enhancing between the two countries, the cooperation enhancing between universities, including academic mobility. The creation of collaborative research centers of global importance in Russia, for example in the field of mathematics, seems upcoming.

The second important avenue is scientific infrastructure development and participation in such programs as ITER, ESRF. Also potentially viable for the participation of France are  Russian megascience program in nuclear physics, research fleet, including NICA program.

Frédérique Vidal designated some social challenges specifying new requirements for education: adjusting of curricula to the contemporary youth interests and knowledge accessibility provision. Mrs. Vidal emphasized the necessity to establish connections between the academics’ world and the enterprises’ world: “This entails not only science monetizing, but also giving an added value to national economy with the aid of science”.

In the course of the discussion, Russian and French experts addressed the issue of education careers customization. It is possible that a formal diploma will cease to be a main goal of education in the foreseeable future, and we shall see a digital version of the classical scheme “professor – student” in the cultivation of competencies and their verification.

As regards the contract-based sectoral important and promising areas of cooperation for both countries, the experts identified the following: macro-technology of artificial intelligence, genomic technology of advanced agriculture.

“Talking about education issues in the future should imply understanding of what future do we mean. We should perform service for society and adjust education for demands and needs of society, of the world”, as pointed out by Jean Chambaz, President of Sorbonne University.

Emmanuel Tric, President of the Nice Sophia Antipolis University , touched upon the aspect of stimulating interdisciplinarity development in the university milieu and integrating its results into the economy, especially in the regional profile. This destination is now seen by experts as a crucial format for improving the socio-economic role of universities and even for their informational and educational effectiveness. In the context of further expansion of the information society and its all-encompassing nature, we can see the increasing role of universities in inculcating on the wide public the proper methods of information processing, the skills of distinguishing between high-quality and falsified information in a variety of areas. Emmanuel Tric noted, “Contemporary youth has to understand the society there its will live tomorrow and to what society we must prepare them, since the artificial intelligence is not only a matter of maths, it will influence the social development».

Pierre Morel, Co-chairman of the Trianon Dialogue, Vladimir Mau, Rector of RANEPA, and Anatoliy Torkunov, Rector of the Moscow State Institute of International Relations (University) of the Ministry of Foreign Affairs of Russia, participated in the session as well.