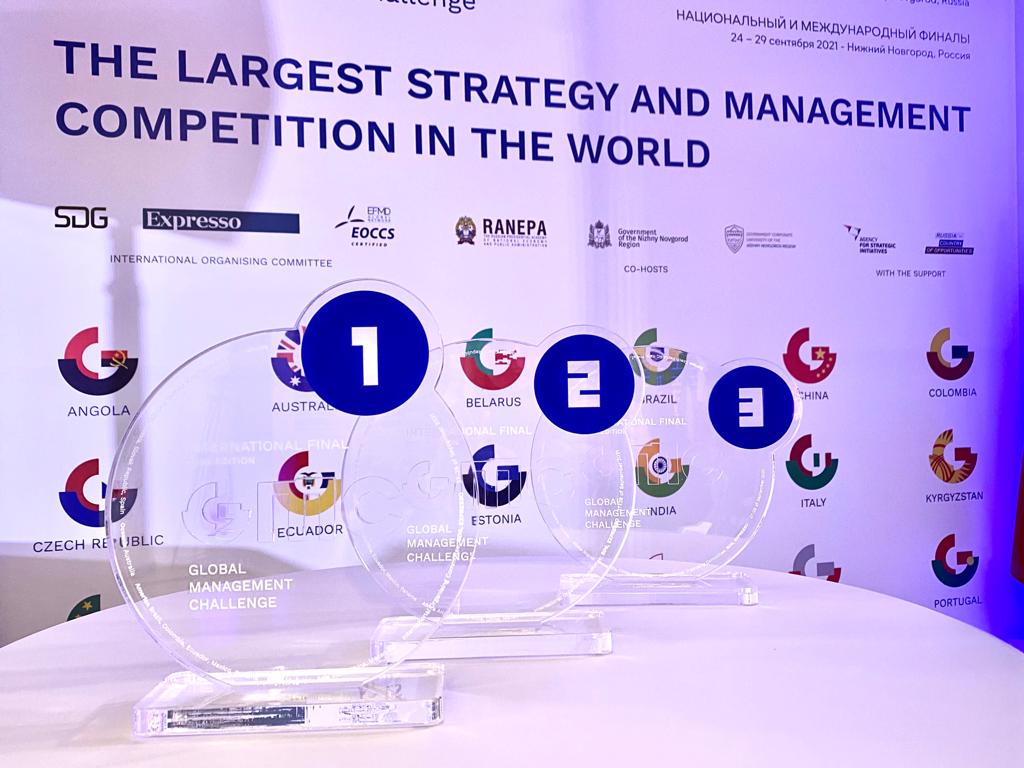 The organizers have announced the results of the World Finals of the Global Management Challenge, the world’s largest strategy and management competition held by the Presidential Academy and supported by the Nizhny Novgorod Region Government. Students, business representatives and government officials from 23 countries in Europe, Africa and Asia competed in the GMC world finals in Nizhny Novgorod.

Team Russia had made it to the world finals where it contended against China, Portugal, Spain, the Czech Republic, Slovakia, India and the 2019/2020 champion, Macao (special administrative region in China). The Portuguese team topped the list (ranked by investment appeal index), followed by China, India, Spain and Russia.

“The team members did great, and made it to the world finals of the Global Management Challenge. They have fought to the end, and joined the top five management teams. The team includes participants from the projects on the Russia – Land of Opportunity presidential platform. Some are experienced professionals, participants in the Leaders of Russia competition – while others are novice managers, winners of the Manage! Cup. It is very important for us that the four contestants who came from different projects, different age groups and different cities have built a close-knit team. I wish them success and all the best in the future,” commented Alexey Komissarov, CEO of Russia – Land of Opportunity and Director of RANEPA Graduate School of Public Administration (GSPA).

Nizhny Novgorod Mayor Yury Shalabayev, winner of the Leaders of Russia competition, noted the importance of hosting such a prestigious international event, which convened representatives from 23 countries despite all the difficulties, and 13 of them actually travelled to Nizhny Novgorod to participate in person. “The Russians showed a decent result taking 5th place. I think such events contribute to raising the level of managerial competencies of local personnel as well as facilitate a good exchange of experience between countries,” Yury Shalabayev commented.

Vyacheslav Shoptenko, Head of GMC in Russia, Director of RANEPA Institute for Organizational Development and Strategic Initiatives, noted: “The competition was unprecedentedly tough during the world finals. The Russian team grabbed 5th place in a tight fight today. This contest gives a chance to all the teams to analyze their mistakes, explore new strategies, find new opportunities and return stronger and more competitive to the world finals next year. The most important thing is to be able to turn mistakes into experience and new opportunities. Looking at the history of Russian victories in GMC, we can do it.”

“The Leaders of the Future project is meant as a major step in the training of new generation managers, from undergraduate students to the Management Personnel Pool program attendees. The program uses a practice-oriented approach, which is based on the training formats that the Presidential Academy uses in courses for civil servants of different levels,” added Yevgeny Averyanov, Program Director, Assistant to RANEPA Rector. “My colleagues and I have been

observing how the approach to leadership is changing both in business and in the civil service. In addition to a visionary perspective, a modern manager also needs a set of skills and tools to quickly assess the situation and make decisions. We offer our students an opportunity to level up these skills.”

The professional league finals were preceded by a student league competition. The Force Majeure team from the Karelian branch of the Academy won that round – second-year students Ksenia Yekimova, Alyona Leontyeva, Anastasia Fyodorova, Yulia Sonchik and Alexander Kayukov. They earned a special bonus – an opportunity to participate in the world finals as observers, where they were able to gain some experience communicating with other teams.