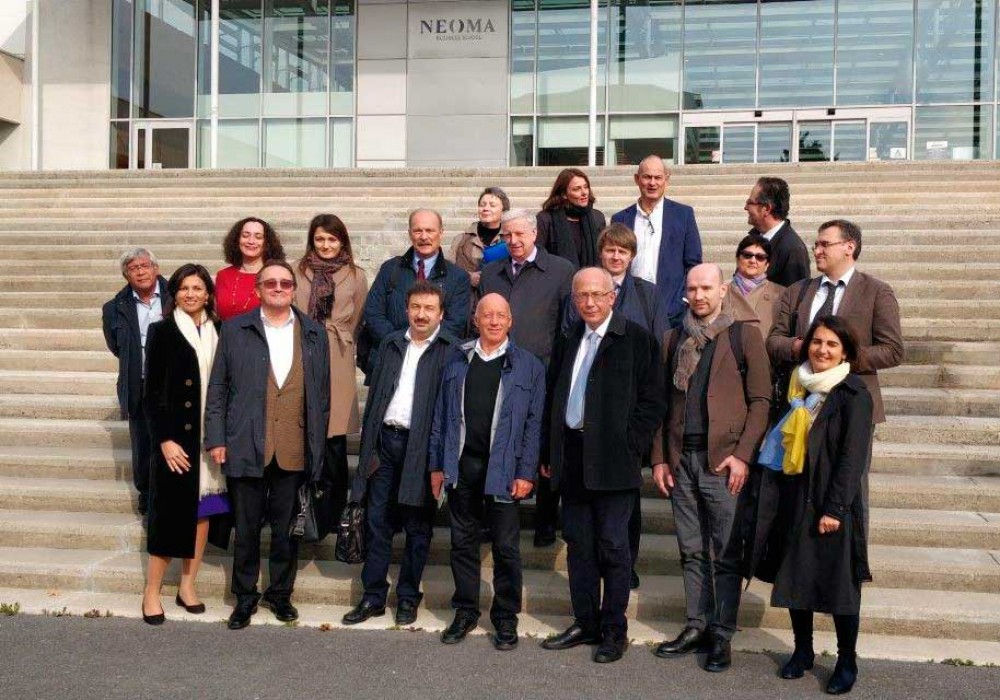 The fifth meeting of the Council of the Russian-French University was held in Reims, France, and ended with seven cooperation agreements signed.

The event was opened by the President of the RFU, RANEPA Rector Vladimir Mau.

The RFU Secretariat presented its annual report. Currently, 21 educational programs are being implemented on the university platform, while another 27 are under development. More than 400 students are enrolled with the RFU programs, 197 of them joined in 2018. The university has organized 12 summer schools, a cycle of methodology videoconferences on French for students and teachers, a series of lectures on French poetry and literature, and several research projects. The RFU activities are widely covered on its official website and official Facebook page.

The participants presented a plan to promote the Russian-French University and its brand; the RFU trademark registration process is underway. The Council members decided to concentrate on creating unique interdisciplinary programs and discussed the possibilities for implementing this initiative.

NEOMA Associate Dean Celine Davesne spoke about the steps taken to attract business to the RFU educational process. The RFU Secretariat prepared a regulation codifying the RFU partner status and developed a presentation for businesses; negotiations are underway with large companies on internships for RFU students and graduates.

Several cooperation agreements were signed at the meeting:

- The exchange agreement between the Russian Foreign Trade Academy and SKEMA envisions a student exchange program where students will do one semester at the partner university. The training will be conducted in English and the credits earned will be accepted by the student’s school. The Foreign Trade Academy students will be offered a choice of one of SKEMA’s international campuses – in Brazil, France, China, or the USA.

- The double master's degree agreement between the Russian Foreign Trade Academy and IAE UNS. The International Trade students will spend one semester at the partner university as part of the program; tuition in Russian, English and French.

- The protocol of cooperation between RANEPA Institute of Law and National Security (ILNS) and ULB Institute of Right to Peace and Developmentwill regulate cooperation on the double master’s degree program on International Law and European Law (Law and International Trade Practice). This program will offer students professional training both in Russia and in France. They will gain experience of international contacts and improve their foreign language skills.

- The double degree agreement between the North-West Institute of Management (RANEPA branch in St. Petersburg) and ISEM UNS is a continuation of cooperation on the Economics and Management bachelor's program that prepares professional managers versed in macroeconomic processes and a wide range of special issues of strategic and business planning.

- The agreement on academic mobility programs between RANEPA Faculty of Economic and Social Sciences (FESS) and SKEMA business school envisions exchange trips for students and teachers. The student exchange format will involve one-semester inclusive education at the partner school with subsequent recognition of credits. Student mobility also includes participation in the summer school programs of the partners.

- The agreement between RANEPA, UNS and the French National Center for Scientific Research (CNRS) was concluded for a research project, Cryptocurrencies, Crypto Assets and Monetary Policy. The plan is to study the economic and monetary nature of cryptocurrencies and crypto assets, which have not yet been properly described by economists.

- A letter of intent between RANEPA Institute of Social Sciences (ISS) and the UNS Faculty of Literature, Arts and Humanities on a double master’s degree program in Philology. The document will help the partner universities develop cooperation in the implementation of the double degree program with a specialization in French language and literature. Much attention will be paid to research work in linguistics.

The meeting participants also re-elected the President of the RFU, who is rotated annually according to the RFU Charter. Vladimir Mau nominated President of the University of Nice Sophia Antipolis Emmanuel Tric; the candidacy was unanimously supported by the Council members. At the end of the meeting, the Rector of RANEPA proposed holding a traditional working meeting of the Council at the 2019 Gaidar Forum.

The meeting was held at the NEOMA business school campus in Reims.