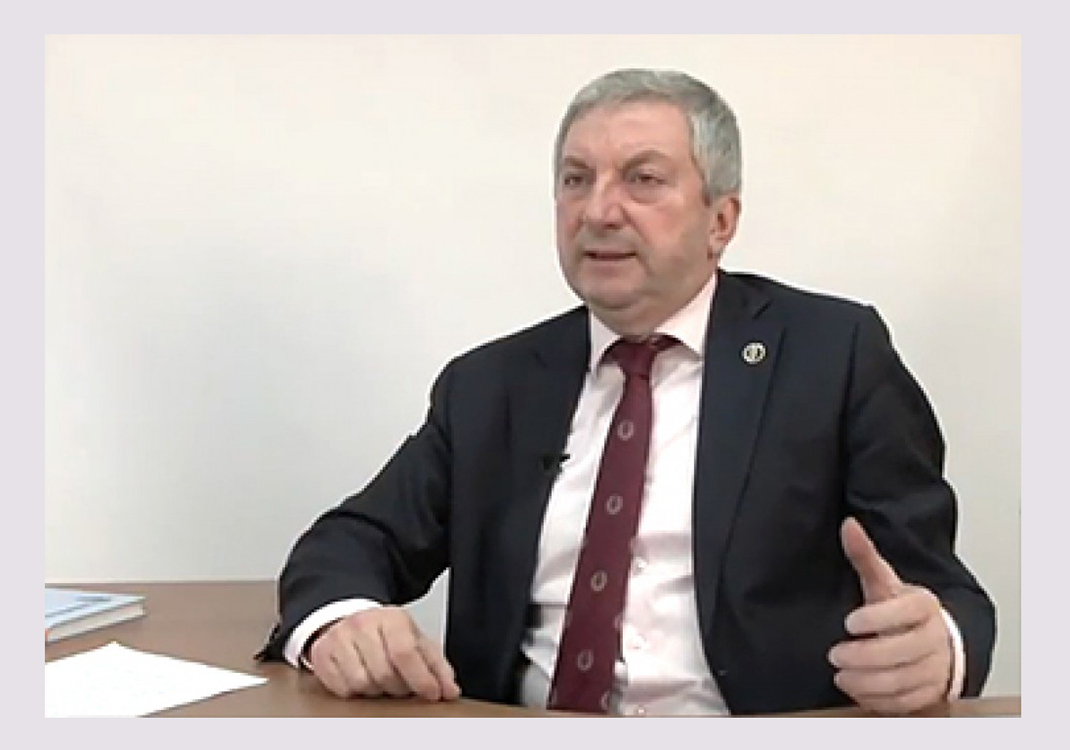 December 7 marks 30 years since the Spitak tragedy, a devastating earthquake in Armenia, which claimed the lives of about 25,000 people in 1988. Dean of RANEPA Graduate School of Corporate Management Sergei Kalendzhyan, Merited Economist of Russia, shared his memories of that time.

– What do you remember about the earthquake?

– The earthquake in Armenia occurred on December 7, 1988 at 10:41 Moscow time; it was daytime, so adults worked, children were at schools, kindergartens or nurseries. It covered the territory where more than one million people lived and destroyed 40% of Armenia’s industrial potential. The cities of Leninakan (now Gyumri), the major chemical industry center Kirovakan (Vanadzor) and Spitak were almost completely destroyed, and more than 300 villages razed to the ground. According to official data, the earthquake killed of 25,000 people, but the actual number of deaths was much higher, thousands of people became disabled, and tens of thousands had serious mental consequences.

– How did the Soviet government and people in the Soviet Union react to the earthquake?

– For the first time, the Communist party and the Soviet leadership officially turned to foreign countries for help. A lot of volunteers flew to Armenia from all over Russia and other Soviet republics. Rescuers from many countries of Europe and America began to arrive very quickly. It was an act of charity and heartfelt compassion for Armenia in distress.
The joint work of so many people saved the lives of those who could have died under the rubble from wounds, exhaustion and frostbite. Chairman of the Soviet Council of Ministers Nikolai Ryzhkov played an outstanding role in organizing assistance to the victims. He immediately arrived in Armenia and personally supervised the reconstruction, while also mobilizing the vast country’s resources. As a token of gratitude, Nikolai Ryzhkov was awarded the honorary title of National Hero of Armenia, and the Armenian people named squares and streets after him.

– Do you remember what you did at that time?

– It was a shock, and tears flowed from the eyes of their own accord... I remember attempts to reach friends. Like thousands of Muscovites, my family brought warm clothes for adults and children to the Armenian Embassy, as well as other necessary things.

On my own initiative, I made a proposal to Secretary of the Department of Economics of the Soviet Academy of Sciences Abel Aganbegyan to set up a special commission. He supported the idea and very quickly agreed it with the leadership. The commission for the revival of Armenia under the Presidium of the Soviet Academy of Sciences included more than 20 prominent Soviet scientists. I was the coordinator of all the current organizational work of the commission, the sessions in Moscow and Armenia. Director of the Central Economics and Mathematics Institute Valery Makarov was a great help; the institute covered the travel expenses for me as a senior research associate at CEMI and a number of commission members.

The Moscow meetings of the commission were at the CEMI Academic Council conference room. The commission members made regular trips to the earthquake zone, studied the developments, and made proposals for resolving priority socio-economic problems. Dr. Aganbegyan personally reported the results of the work done to the top leadership of the republic, the first and second secretaries of the Central Committee of the Communist Party of Armenia, and the leadership of the Council of Ministers. The commission prepared advisory documents for public authorities.

– What problems did the commission discuss?

– The main priority was to justify the restoration of industrial facilities not only in the disaster zone, but also in the republic as a whole. Thanks to the efforts of Dr. Aganbegyan, very important aspects of the preservation of the Armenian nuclear power plant and the largest chemical plant in Armenia, Nairit, which supplied more than local 60 enterprises, were discussed at the meeting.

Unfortunately, the commission’s recommendations on industrial development were not implemented for a number of reasons. The closure of the nuclear power plant led to serious electricity supply problems and was followed by the closure of most plants and factories; tens of thousands of people in Yerevan and other industrial cities in Armenia lost jobs. Parks, gardens and forests were cut down to heat apartments and houses. All this, in turn, led to a mass exodus of people not only from the earthquake zone, but also from other regions of Armenia.

Dr. Aganbegyan later drafted comprehensive proposals for the Armenia development strategy, but most of them have never been implemented.

– Did the commission succeed in organizing international projects?

– Yes, we closely cooperated with international organizations. Thanks to the help of the Zoryan Institute (Canada) and its President Greg Sarkissian, we were able to hold two conferences, in Paris and Yerevan on the revival of Armenia after the earthquake, which attracted additional attention from business circles, benefactors and scientists from France, Canada and the United States to the problems of restoring the earthquake zone, and also combined the potential and knowledge of Russian and Armenian scientists.

Three professors from our Academy made an outstanding contribution to the work of the commission on various complex issues and thorough exploration of the earthquake zone: Mikhail Mkrtchyan (former chairman of the State Planning Board of Armenia), Grant Poghosyan (former head of the Yerevan Institute of National Economy Department), Norik Muradyan (former first secretary of Spitak city Communist Party committee), Dr. Nikolai Yenikolopov, as well as Director of the CEMI Center Rigo Srapinyants.
Unfortunately, Dr. Yenikolopov, Professors Mkrtchyan, Poghosyan, and Srapinyants, have not lived to see the 30th anniversary of the earthquake and what the cities and villages in the earthquake zone look like today.

– I visited the cities in the earthquake zone with my family this summer. The center of Gyumri looked very clean and beautiful, just washed with light summer rain. I am happy that we managed to revive Armenia and hope for the future. The assistance of Russia and other Soviet republics, France, USA, Norway, Switzerland, Finland, Sweden, Italy and other countries, and individual benefactors of all nationalities are still felt in the cities that were restored from the ruins.

As a sign of gratitude to all countries and people who helped Armenia, the Aurora humanitarian initiative held a gala evening at the Moscow Art Theater to honor everyone who helped and commemorate those who died during the Spitak earthquake.

More than 800 Armenians are among undergraduate and graduate students at RANEPA. Many of whom were born in Russia, but their parents come from the earthquake zone. For them and their friends, December 7 is a day of mourning. Our Armenian students go on and work while keeping the memory of their relatives and friends who have not survived. The students and teachers of the Academy are involved in various charitable and humanitarian projects that are very necessary for the residents of the earthquake zone.

Charity work is still ongoing: some people still live in garages and slums there. Jobs need to be created to stop migration. Schools and hospitals are being built thanks to international assistance.

We are all inspired by the example of a wonderful children's park opened in Gyumri, funded by Russian business leaders and benefactors Ruben Vardanyan and Mikhail Kusnirovich, their friends and partners. Thanks to the park, the beautiful ancient Gyumri will become even more beautiful, with more children’s laughter and happiness in it.