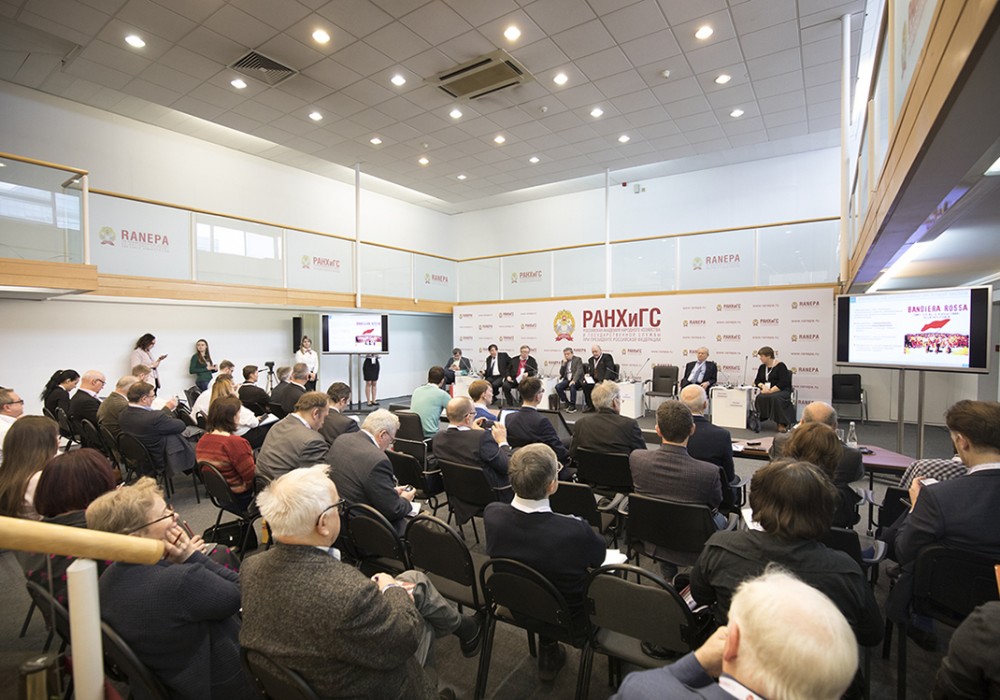 A key speech at the discussion was presented by Stepan Lvov, head of the research department at the Russian Public Opinion Research Center. The expert called the misalignment with the context of social processes one of the modern problems. This problem can be solved by choosing adequate differentiating features.

The expert drew attention to such a definition of the concept of a seriality. Despite the autonomation of society, such autonomations form an aggregate. Fears and anxieties may cause the emergence of the seriality. These phenomena are the main attributes of modern life. As a result, modern society finds itself in a state of anxiety. 51% of society members are anxious about the future.

People, who assess their financial situation as good, are less susceptible to fears. Fears are conventionally divided into several categories: economic, physical and social. The first make up the largest share.

A person in fear needs to be protected, and stereotypically refers to “common places”. Thus, the effect of general intelligence arises. As a result, people have the so-called mantras. The most common mantras are related to raising the retirement age, blocking Telegram, elections, and others.

Collective life suits the majority, to some extent being a part of the “seriality” is attractive - it excludes inequality.

Vladimir Petukhov, Head of the Center for Comprehensive Social Research of the Institute of Sociology of the Russian Academy of Sciences, commented on the topic of public anxiety. According to the expert, many fears are man-made, and not the results of objective reality. The highest indicators of anxiety according to research results are caused by the situation in the country, whereas the situation in the region of residence causes the lowest fears.

Vladimir Petukhov commented on the key demands of society for change and the formation of new subjects of social action. The relative majority of the Russians believe that changes are needed; however, a considerable part of them voiced a request for stability. The demand for changes is particularly pronounced in the segment of the young part of the population. The majority of demands is social in nature.

Oleg Chernozub, Head of the Center for Social and Economic Research, RANEPA, paid attention in his report to the problem of loss of explanatory models relevance. According to the expert, the concept of modern man is currently in crisis. Following the traditional model, a person acts on the basis of what is beneficial for him or her. This thesis has become extremely problematic in recent years. Economics has proven that even under ideal conditions, the model of a rational person is very limited in its operation. The more uncertain the environment, the less rational behavior becomes. What to do if a person does not understand what is beneficial for him/her and how to behave? It is necessary to study decision-making mechanisms and related factors. Only some of a person’s motives can be rationally explained, Mr. Chernozub believes.

Over the past 20 years, the values of the Russians remain relatively stable, Alexander Demidov assures. The ratio of moral and material values is an indicator of the democratization of society. The personal values of the Russians are changing towards democratization at a very slow pace, the speaker said. At the same time, the expert drew attention to the fact that it is extremely important to influence the value-based potential of the population in the first place, and this is more difficult than changing one or another economic component.

Natalya Tikhonova, chief research fellow at the Center for Stratification Studies of the Institute for Social Policy at the National Research University of Higher School of Economics, commented on the thesis of the rational behavior of the Russians and noted that there is a fundamental difference between economic rationality and rationality in general. The Russians, according to the expert, are generally relatively rational. In modern realities, they prefer to build up their material capital in order to remain in their social stratum. Even if it is associated with the need to undertake credit and mortgage obligations. On the one hand, such behavior is irrational, but from a social point of view it is rational, since in modern society social status is of high importance. Natalya Tikhonova paid special attention to the need to study the social structure of society in order to develop social and economic policy.