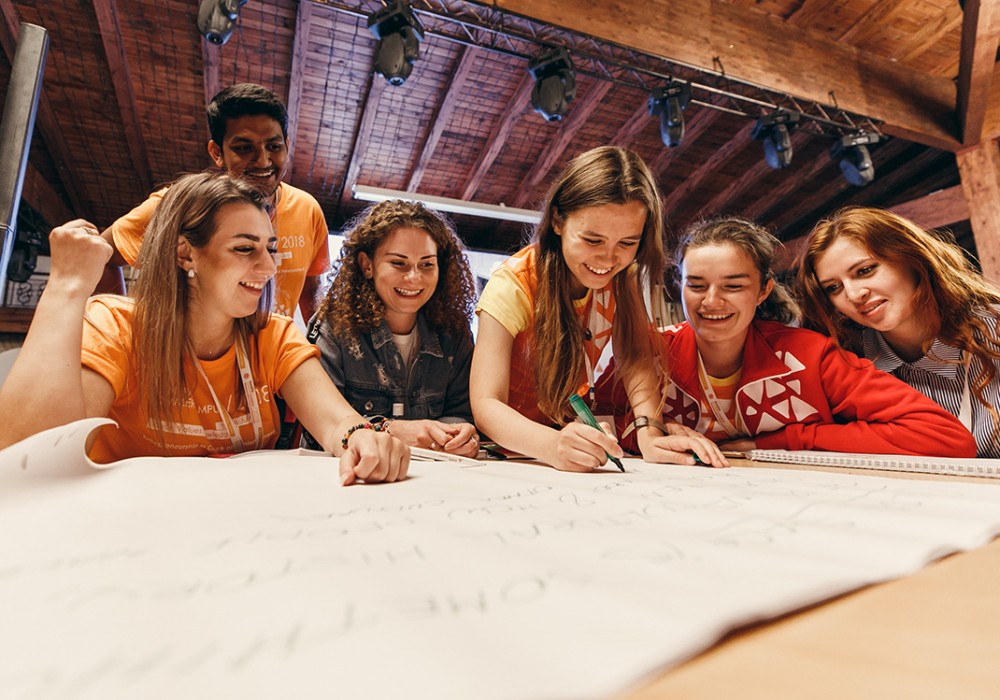 July 24, the VII RANEPA Summer Campus – team projects were defended which the Participants had prepared in the course of the Event held on July 15-16 in the Republic of Tatarstan.

RANEPA Summer Campus is an annual international educational project and an area of opportunities for the best students from various countries of the world. The Event is held with support of Tatarstan’s Government with invited top experts attending. The students visit the most interesting edutainment sessions and present their team projects. This year the Campus gathered 220 participants from 35 countries all over the world, the main subject of the Event being Entrepreneurship in Culture and Entertainment.

By results of the draw procedure, No Ropes team was the first to enter the scene. The target audience of RANEPA Summer Campus was defined by the Russian students as young people aged 19 to 22, open to new opportunities and ideas. Next skills were identified which any applicant should have. These are knowledge of English of at least an Upper-Intermediate level, team-working skills, leadership qualities and creative approach to solving problems. The distinctive feature of a team vision was an approach to the marketing campaign. The students identified three major components in their work: inspiration, emotional value and motivation. Their idea consisted in social design based on their stories, emotions and innovations. Their project was to launch Campus Challenge with engagement of famous ambassadors to cover the greater audience.

Royal Team was the second team performing.  That team opted to select, as a key factor for themselves, a stronger brand visibility and attraction of many foreign students. Such were the main tasks. The participants decided to go their own way and offered to increase the number of partnership universities, by including Universities of Toronto (Canada), Copenhagen (Denmark) and Cape Town (South Africa).

Bumblebeez – one of the most brilliant teams this year – started their presentation with a self-presentation video. Among their main activity lines, they identified dissemination of knowledge, emotional influence and search for partners. The team’s slogan was “Create, not follow”. The students decided to act via promotion by social networks and subscription of new channels. They believe that it’s important to create an interesting content which will become viral, connect contextually targeted advertising on various sites, ensure the broadcast and popularization of lectures. Besides, the participant proposed to created toys, phone cases, etc.

The Fantastic 17 team opted to go ahead and organize RANEPA Summer Campus with participants from countries all over the world. They feel that it’s necessary to invite foreign bloggers with lots of subscribers. The students offered to shoot more videos with participants, lectures and motivational videos. The idea was put forward to extend the mobile application of RANEPA Summer Campus, add personal achievements, challenges, options for design and discussion of their own project.

Team No. 5 WiFive Team analyzed the target audience of RANEPA Summer Campus and identified criteria for selection: level of proficiency in English, analytical skills, creativity, age, etc. Next the participants identified the RANEPA Summer Campus competitors, their strengths and their promotion methods. The direct competitors are international and Russian forums (e.g. Taurida, Territory of Meanings, Global Youth Village). Implicit competitors are exchange and internships, Work and Travel programs. WiFive Team suggested a lot of methods for marketing strategy, including: creating educational branded content and posting on thematic Web sites, creating a blog for RANEPA Summer Campus, shooting videos for YouTube, working with partners and publish information on their resources, collaboration with ambassadors for RANEPA Summer Campus.

Next, the scene was given to Team No. 11 One by One. “Strategic embassy” was the first proposal of Team 11. An Ambassador is a participant and graduate who represents RANEPA Summer Campus and invites people in his/her home country to attend the RANEPA Summer Campus. Ambassadors conduct events in their countries and tell about RANEPA Summer Campus and its opportunities. More and more importance is paid to selection of ambassadors, while tutors and moderators select the most worthy candidates. Then – decision on the case, interview via Skype, and an Ambassador is ready to work. The participants also suggested to use of contextual advertising – Google AdWords, social networks, etc.

At the beginning, Team No. 6 Foxsix presented the statistics of replies to the question "How do students learn about RANEPA Summer Campus?" The most frequent answer was "University". The main motivation of the participants – the desire to gain intercultural experience. Besides, the students are eager to improve their proficiency in English. For the next year, the Team offered the following topic: “Leadership in Sports and Social Sphere”. In their opinion, Adidas, Coca-Cola and Planet of Fitness could act as official partners of RANEPA Summer Campus. First, sports are a healthy lifestyle which brings together people of different cultures. Besides, Kazan is often called a sports capital. Leadership is a dynamic concept, capable of shifting paradigms. Social responsibility, according to the members of Foxsix, is reflected in volunteering, caring for the environment, creating eco-projects. In addition, students offered to launch a new tag - #PANEPAglobalcamp. One is to actively involve social networks in order to disseminate information about RANEPA Summer Campus and promote its official Web site, so that students from all over the world became aware of such learning opportunities. Offline marketing includes the Brand Ambassador Program. The Team offered to set a common channel for all participants of the RANEPA Summer Campus for communication and discussion of projects.

Team No. 1 TheBigScreen17 started its marketing strategy for RANEPA Summer Campus with defining the target audience. More and more universities and colleges, mass media, students, professors, and interesting speakers are to be informed. For promotion, the participants offered to design the own mascot for RANEPA Summer Campus, i.e. Peacock RURIC (RANEPA, Unity, Relationship, International, Culture). The mascot personifies the unity of people of different cultures, their friendship and solidarity. Here, Aeroflot, Coca-Cola, Yandex, Alabuga, TED and Innopolis University could act as sponsors and partners. It was also suggested to set up Winter Campus and spread it all over the world. To finalize, the team presented a video telling a story of their fascinating experience at RANEPA Summer Campus.

Team No. 4 International Vision paid special attention to global leadership in technologies and innovations. Speaking about promotion, the students told that the main ways they could learn about RANEPA Summer Campus were through social networks, stories of its graduates and events related to RANEPA Summer Campus. While their parents could become interested the prospects of employment and scholarships. Of interest are job vacancies and intercultural communication experience. Next the Team told about the concept of their local partners and corporate social responsibility. Students presented the statistics, estimates for advertising campaign and the budget expenses. In the opinion of student participants, one should disseminate information on RANEPA Summer Campus worldwide to expand the boundaries of the Event and host at least 35 nations. Besides, the team drew attention to the value of academic knowledge. To finalize their presentation, the team presented a video about future technologies – the above video calls to unite, develop and just live.

Team No. 8 – 8ternity completed the presentation of student projects. Participants proposed a radically new program with new structure and additions. The main concept is to set up a futuristic campus which aims to prepare leaders of the future adapted to new technologies and able to develop the country and the whole world in the field of high technologies. The authors of the project were egged to this concept by the book Homo Deus. The students designed a new structure: i.e. setting up teams of 10 members only, thus simplifying the process of their organization. They suggested to assign two tutors to them, i.e. a personal tutor who leads a student to his/her personal goal at this RANEPA Summer Campus, and another one responsible for activities of the whole team.

The students built educational programs on Soft Skills – skills that will be in demand by 2030. 9 educational blocks are to be set up in total: Economics, History, Business, Management, Politics, Philosophy, Psychology, Marketing and Finance. Each student may select three blocks at the most. Thus, when a team is to be formed, it will be clear who is responsible for what. First of all, you need to pay attention to such trait of the students as creativity, commitment, organizational skills and ability to work as a team, stress resistance and leadership skills. If Headliners can be engaged, it will help to shape the brand of the RANEPA Summer Campus. The students finalized that for promotion one is rather to use personal invitations for talented students and arrange for contextual advertising in Google, Facebook and Instagram.