HomeNewsNews The first day of the Gaidar Forum 2019 ended

The first day of the Gaidar Forum 2019 ended 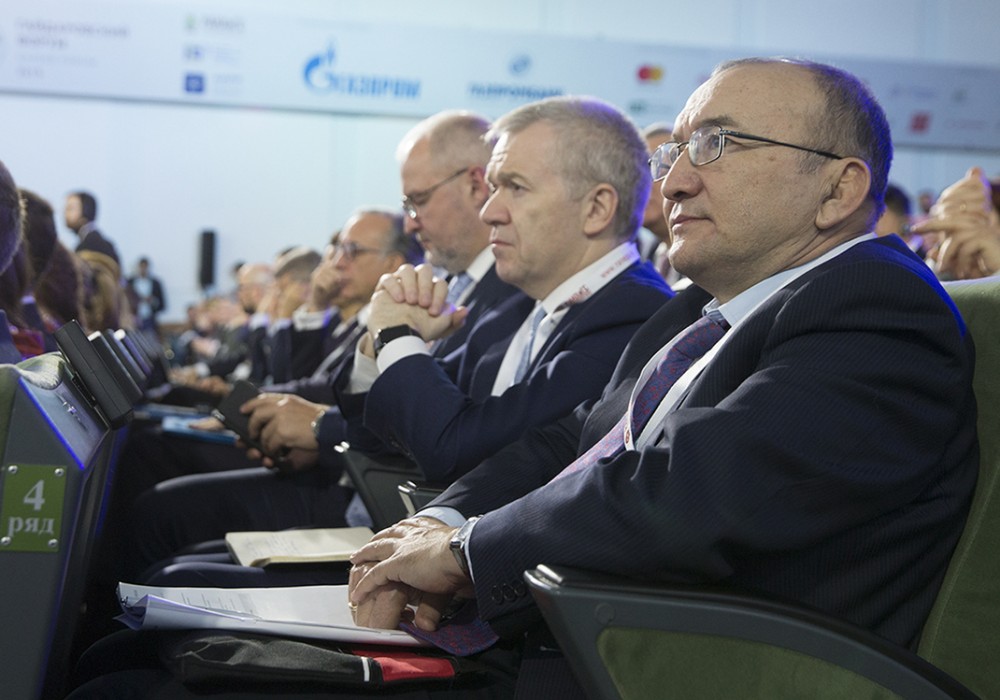 The results of the first working day of the 10th Gaidar Forum are summed up. Plenary discussion “National Development Goals and Global Trends” with the participation of Dmitry Medvedev, Chairman of the Government of the Russian Federation, became its central event.

Dmitry Medvedev in his speech described the following current key challenges: a high level of uncertainty that affects almost all areas of public life, the speed and scale of digital transformation, as well as the global changes in the traditional markets and the emergence of new markets. These challenges shape both the global agenda and the priorities for Russia in the mid-term, as set out in the Presidential Decree dated May 7, 2018. The Chairman of the Government of the Russian Federation noted that work on the national projects is already under way, transforming global challenges into new sources of growth. The Chairman of the Government also mentioned the tasks of infrastructure optimization as another global problem. In particular, Russia has to reduce the regulatory burden on entrepreneurs, ensure cybersecurity as part of the country's digitalization process, and perform radical transformation of the labor market and ensure changes in the social sphere against the background of the massive release of low-skilled workers.

The plenary discussion was attended by Paula Risikko, Chairperson of the Finnish Parliament; Tarman Shanmugaratnam, Deputy Prime Minister and Coordinating Minister for Economic and Social Policies of Singapore; Giovanni Tria, Minister of Economy and Finance of Italy; Frédérique Vidal, Minister for Higher Education, Research and Innovation of the French Republic; and Lucas Papademos, Honorary Chairman of the Bank of Greece, Prime Minister of Greece (2011–2012). The session was moderated by Vladimir Mau, Rector of RANEPA.

The organizers devoted a special place in the forum program to social issues. Speaking at the panel discussion “The Social Triad: Demography - Employment - Incomes”, Tatyana Golikova noted: “The reduction in the level of poverty and the growth in incomes of the population are directly related to the RF’s getting into the top five leading economies of the world, ensuring the pace of economic development higher than the world levels and not exceeding inflation rates of 4%". Also, the Deputy Chairman of the Government of the Russian Federation stressed that within the framework of the implementation of national programs aimed at demography increase, it is necessary to take a comprehensive approach to support of the natural population growth, namely, not only by increasing the birth rate but also by reducing mortality, increasing life expectancy, increasing labor productivity, and reducing the poverty of citizens. Tatyana Golikova paid special attention to issues of internal labor migration, programs for retraining of citizens of pre-retirement age, as well as expanding vacancies with the possibility of remote and out-of-office work schedules.
The discussion was attended by Maxim Topilin, Minister of Labor and Social Development of the Russian Federation, and several heads of Russian regions.

During the panel discussion “Income inequality in historical perspective”, Maxim Oreshkin, Minister of Economic Development of the Russian Federation, noted that the level of economic inequality in Russia is gradually decreasing but remains unacceptably high. According to the minister, the danger of a high level of inequality lies in the fact that part of the population is deprived of access to high-quality education and health services. This may complicate the development of human capital.

“Therefore, without finding a“ global treatment” for this issue, this trend that has developed over the last 20–30 years, we will see stronger negative effects on the global economic dynamics not only in the current perspective, but also in the global, in the long term perspective”, said Maxim Oreshkin.

The speakers analyzed historical facts affecting changes in social inequality and discussed the prospects for overcoming it in the context of contemporary world challenges.

When implementing national projects, regions need to conduct comprehensive and full-fledged work on a par with the federal center.

During the discussion of the main issues in the panel discussion “National Goals and Social Challenges: the Regional Aspect”, special attention was paid to ensuring the achievement of national goals at the regional level and the synchronization of powers and sources of funding.

First Deputy Prime Minister Anton Siluanov said that “the state of finances of the constituent entities of the Russian Federation has become stable, much more stable than it was three or four years ago. And it allows to start implementing important state projects that we will launch together with the regions this year.”

The heads of the subjects of the Russian Federation took part in discussion of the issues.

A separate block in the forum program is dedicated to discussions related to aspects of education and the prospects for its development.

For instance, within the framework of the Forbes magazine business breakfast “Private Investments in Education: Motives, Priorities, Problems”, experts discussed the issues of investing in education in Russia.

The discussion was moderated by Nikolay Uskov, Forbes Russia editorial director.  During the session, he noted that, although the effectiveness of education is the key to national security and the most important resource in the development of civilization, the share of GDP in the educational sector is only 3.6%.

Co-host of the breakfast, Vladimir Uzun, President of the Prosveshcheniye Management Company JSC, noted that the underlying motive of investment in education is not the profit generation but rather improvement of the quality of children’s education, addressing the existing problems in the educational environment.

It was also suggested that the next major digital company to be created in the world would be an educational company. That is, there is a chance for investment to create a leader that, in 10-15 years, would have some market share, become a profitable business and play both in the online and offline markets in Russia.

In the framework of the panel discussion “85 Projections of the National Healthcare Project”, Veronika Skvortsova, Minister of Health of the Russian Federation, spoke. “Genome determines the health potential for 15% only. The rest 85% depend on external factors that affects our genome through epigenetic mechanisms. People’s health is determined by manageable behavioral risk factors for over 60%,” she said.

Based on these data, the Minister explained that the human only can exert the maximum influence on his or her health. The paradigm of the today’s healthcare consists in the transition from the passive way of life to the proactive society. For this purpose the modern healthcare adjusts the public information system as well as forms motivations to lead a healthy lifestyle. Such trends are combined in the national Healthcare Project.

The forum presented a rating of innovative regions of Russia.

The Association of Innovative Regions of Russia conducted an annual presentation of a study to identify the level of development of the country regions. Developed jointly with the Ministry of Economic Development of the Russian Federation, the rating is used for monitoring and management purposes.

Since 2016, the rating includes 29 indicators. To make it unbiased and well-founded, the rating is not based on expert assessments, but on quantitative indicators. The rating makes it possible to identify leaders in each component, to show strengths and weaknesses in the development of each region.

The forum discussed strategies for the development of business schools in the conditions of digitalization, constant transformations in the external environment, and an increased level of requirements of the business community to the practical orientation of knowledge. Experts discussed synergy possibilities in education market between business schools, corporate universities, and training centers for creation of a perfect business school model within 20 years.

“Values structure vision, attitude towards time, social needs, national identities, and the main issue – mental vision about all of this, vary wildly in the world. Every business school has to adapt its curricula to the particular audience requirements”, commented Pierre Tapie, founder of PAXTER.

Discussion participants came to the consensus, that the most world business schools have to respond quicker to fast-changing external conditions and show more flexibility in respect to business demands.

During the expert discussion of the Trianon Dialogue “Russia – France: New Education Technologies”, they discussed a roadmap of bilateral cooperation in higher education and scientific research, as well as the development of scientific and technological cooperation between the two countries.

The expert discussion “Sport in the System of Modern International Relations: Rapprochement or Pressure?” focused on the major sporting events and their impact on international relations. Experts talked about sports as a tool for solving social problems, doping problems, and exporting sports services.

The transition from multiple systems to a single one and the need to integrate digitalization, taking into account those areas where it may be fruitless, were discussed at the expert discussion “Digital Health: Is the Future Already Here?”.

How and by what criteria should a civil servant be evaluated? What are the key skills to develop? What is the optimal training format? These and other questions were answered by experts in the framework of the discussion “New formats of professional development of civil servants: national and global contexts”.

The heads of Russian regions, ministries and departments, representatives of educational and business structures actively participated in the work during the first day of the Gaidar Forum. The following persons also took part in the forum dicussions: Danica Purg, President, CEEMAN; Roza Semenova, Project Manager, the Association of Innovative Regions of Russia; Giles Merritt, founder, chairman of Friends of Europe, director of Security & Defense Agenda; Markus Ederer, ambassador of the European Union to Russia; Wolfgang Ischinger, Chairman, the Munich Security Conference; Franco Frattini, President of the Institute of Eurasian Studies; Ernesto Ferlenghi, President of the Russia-Italy Confederation, Vice-President for the Development of Markets in Russia and Central Asia at Eni; Marala Charyeva, Managing Partner, OPEN MIND Business Bureau, Vice President of Sochi 2014 Olympic and Paralympic Organizing Committee; Svetlana Lukash, Sherpa in the Group of Twenty, Deputy Head of the Expert Department of the President of the Russian Federation; Gabriel Di Bella, the International Monetary Fund’s Resident Representative in the Russian Federation; Andras Horvai, Director and Resident Representative of the World Bank in the Russian Federation, Europe and Central Asia; Vadim Vlasov, President of the Novartis Group of Companies in Russia, Regional Director of Novartis for Eastern and Central Europe and the CIS; Oxana Monge, CEO of Sanofi in the countries of the Eurasian region; Ekaterina Pogodina, managing director of Janssen, pharmaceutical division of Johnson & Johnson Russia and the CIS; Marwan Akar, General Director of MSD in Russia and the EAEU countries; Thomas Robinson, President of AACSB; Hwang Hwan Cho, Professor at the National Institute for Human Resource Development of the Ministry of Personnel Management of the Republic of Korea; Luis Diaz-Rubio, Managing Director, EMEA Region Emerging Markets, Janssen, Johnson & Johnson Pharmaceuticals; Alexander Ivlev, managing partner of EY for the CIS countries, chairman of the Supervisory Board of the Russian Anti-Doping Agency (RUSADA); Pierre Morel, Co-Chairman of the Trianon Dialogue; Jean Chambaz, president of Sorbonne University; Emmanuel Tric, President of the University of Nice Sophia Antipolis.