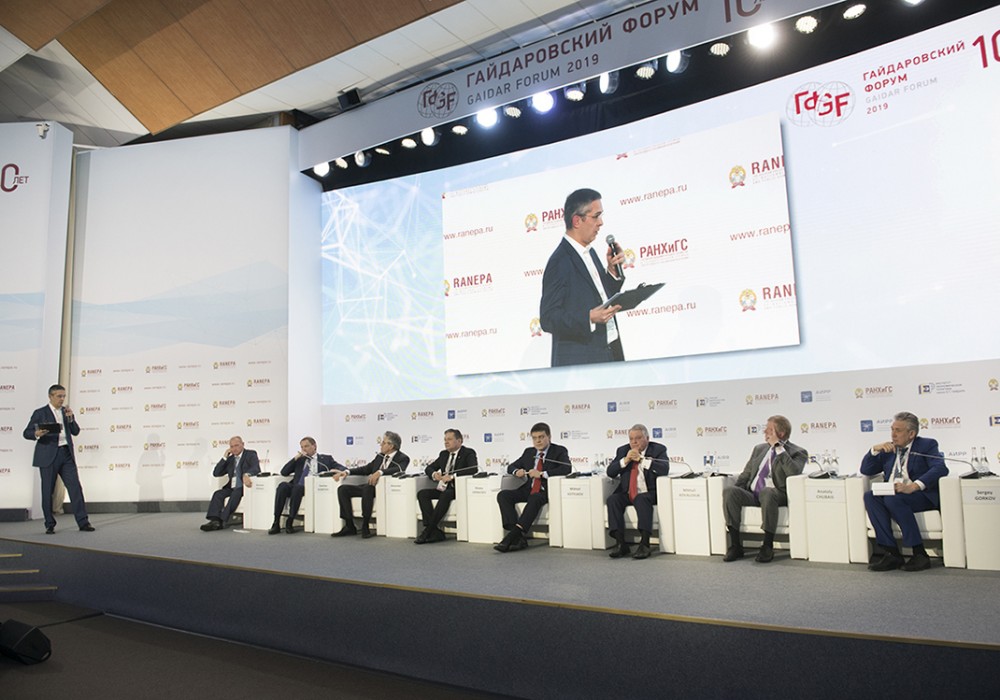 Putting the vector of the discussion panel “Management of Scientific and Technological Development of Russia”, the Minister of Science and Higher Education of the Russian Federation, Mikhail Kotyukov, suggested that when discussing the topic the participants keep in mind such a document as the Development Strategy to 2035.

According to the minister, the strategy is quite interesting from the point of view of being ready to respond to big challenges. This strategy is not about the development of science as such, but a strategy of scientific and technological development. “The tasks outlined in this document are common, and we all need to work out the tools that would allow us to carry out the technological development of Russian companies, relying on our own research and development, and do all this together with educational organizations in order to bring up new modern personnel,” commented Mikhail Kotyukov. According to the minister, the task is ambitious. It is necessary to ensure the development of all key components, infrastructure, and personnel, to provide the technological component of the processes so that the tasks are solved in a comprehensive manner.

Continuing the topic, Mikhail Kovalchuk, President of the National Research Center Kurchatov Institute, explained that “it is extremely important to understand the fact that science has become the main productive force of the new age. The share of R&D, that is, intelligence, reaches 90%. The end product of science becomes sublimated intelligence.” It is also important to understand the priorities. The strategy of scientific and technological development is a document that defined the global framework of civilization priorities. Priorities may be tactical and strategic. Strategic priorities formulate the development of the life of the state and society; in one way or another these are challenges, and tactical ones are of a market nature and should be formed by business, Mikhail Kovalchuk stressed.

Science as a productive force is not homogeneous. It consists of elements completely different by their essence, type of financing, and purpose. Russian science is formed according to the German model. It is very important to structure own science, and in this sense, according to Mr. Kovalchuk, the reformation of science in Russia is almost completed with the creation of the Ministry of Science and Higher Education; all institutes and universities are controlled by the same authority.

Another important aspect is energy industry. A third of world energy is spent on maintaining communication networks. Therefore, energy industry in its development should be ahead of digitalization.

The evaluation criterion is quite simple – what part of the funds that the state allocates to science in general comes from the budget, and what part comes from the economy. It is known, Alexander Sergeev said, that in Russia, 1.12% of GDP is allocated for research and development. If you compare this figure with other countries – it is only a small part. For example, in Korea, this figure is as high as 4%. It is also important to pay attention to the ratio. In Russia, this is 30% from the economy and 70% from the budget. 0.74% of GDP is the investment of the Russian budget in science. For comparison: in Japan it is 0.64%.

The problem is that you need to re-balance these 30% and 70%. “It is necessary to make companies really invest deeper in science, they should invest both in the searches and in fundamental investigations,” explained Alexander Sergeev. According to him, by 2024, Russia needs to reach a 50/50 ratio. This will be an indicator of how much science is the productive force of the economy

Anatoly Chubais, Chairman of the Executive Board of RUSNANO Management Company, spoke about RUSNANO’s investment experience. At the time of RUSNANO incorporation, the state allocated 130 billion to it. Scientists sounded criticism that these funds should have been invested in science. Based on these investments, an industry was created that generates 360 billion rubles a year. Factories used to invest 30 billion in science per year. State investments of 130 billion turned into annual investments of cost-effective business. According to Mr Chubais, a self-reproducible way of science financing has been created. This way, the business demands become purposeful.

“We got a machine that can replicate itself time after time. If there are opportunities to expand this technology, we will expand. If there is no opportunity, we will not expand,” stated Anatoly Chubais.

The head of RUSNANO agreed with the thesis that a “digital” does not exist without a material carrier; an electronic component base is needed. Saying that material carriers are needed for digitalization, and that these carriers should be Russian-made, the speaker noted that the country has tremendous opportunities, and it is necessary to pay close attention to their use.  Speaking generally about RUSNANO capacity, Chubais noted that the Russian nanoindustry is the third largest non-resource export after weapons and IT technologies in terms of export turnover.

The second problem is the supply as such. “We need to create vehicles that could allow to combine and drive different vectors to a single goal,” said Sergey Gorkov.

Cooperation between businesses and universities, the deputy minister is sure, can provide good opportunities. It is especially important that the flagship companies have external and internal incentives for technological development. It is necessary to develop domestic demand and develop domestic supply jointly with scientific educational organizations and businesses.

“Historically, fundamental, applied and exploratory science in the nuclear industry existed in the same management loop with production,” Alexey Likhachev, the general director of the State Atomic Energy Corporation Rosatom, stressed in his speech. In recent years, Rosatom’s agenda has expanded considerably. “Rosatom” has ceased to be an exclusively nuclear company, but at the same time, the development of those competencies in which the reserves already exist remains a prerequisite. First of all, this is a digital reserve, since after the moratorium on atomic explosions was announced, the developers had to do more mathematical modeling. Also, in order to fulfill international obligations, the state corporation is engaged in waste disposal, which makes it possible to integrate into environmental projects. Scientific groundwork has been done in all these areas.

2018 was declared a year of science in the state corporation. It resulted in increasing the prestige of scientific personnel within the industry, articulating clear goals and objectives, and fruitful and demanding cooperation with institutions.

Speaking about the digital economy, Stanislav Kuznetsov, Deputy Chairman of the Board of Sberbank, expressed concern that the applied sciences are represented therein whereas the fundamental sciences are not. Large companies are interested in basic research.

“For us, the focus is on the customer, and we are thinking about how to further identify the customer, how to make a product convenient for them, new products should be comfortable and reliable,” Stanislav Kuznetsov said. Such developments will be in demand in the near future, as modern identification methods no longer fully respond to the demand of the industry.

Sergey Polyakov, Director General of the Innovation Promotion Fund, commented on the important aspects of the innovative enterprises active inclusion in the economy. “The mechanism of startups commercialization is quite important. In all developed economies, the share of innovative companies is the growth driver,” noted Sergey Polyakov.

It is necessary to expand the start-up funnel, primarily through the promotion of technological entrepreneurship among young people. We need to start from school. To increase the share of innovative companies in Russia, access to large corporate orders is important, Mr. Polyakov summarized.

Alexander Auzan, Dean of the Faculty of Economics, the Lomonosov Moscow State University, stressed that 10 years ago the decision was seen as follows: create the institutional environment, and then the entrepreneurs will do everything themselves. This proved to be an extremely difficult task. In addition to the complexity of institutions formation, there is still an invisible part of the iceberg – the socio-cultural layer. Moreover, the increase in funding alone will not work if you don’t look at “to which engine gasoline goes,” said Alexander Auzan.

“It is necessary to do not frontal, but enclave modernization and look for breakthrough points,” noted the dean of economics at MSU.

“Pet” projects, under state control, will dominate until we manage to obtain a sustainable change in the institutional structure. The system built in the 1990’s gave a bad result, and it has to be rebuilt.

There are about three dozens institutional companies in Russia, which are under pressure from global competition, and about two dozens of the same institutional universities, Auzan stressed in his speech.

RVC General Director Alexander Povalko, who moderated the discussion, thanked the participants in the discussion for outstanding examples and independent expert comments.