The Gaidar Forum discussed the sanctions and trade wars (VIDEO) 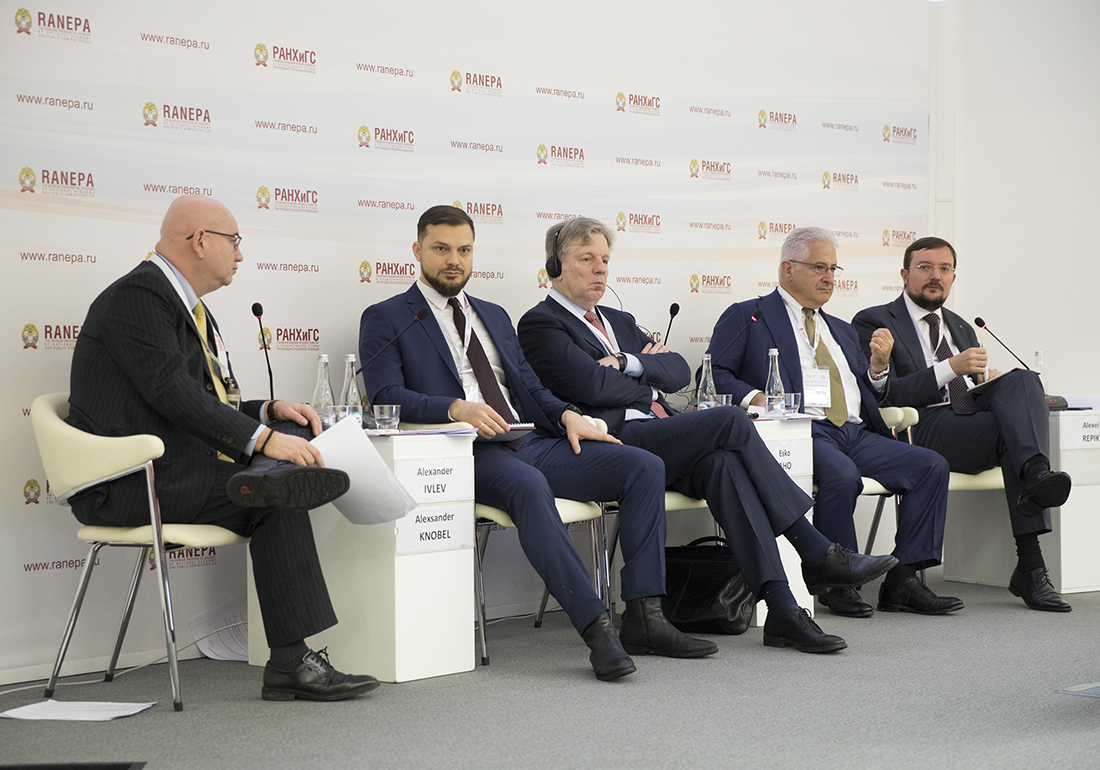 Within the framework of the 10th Gaidar Forum, a panel discussion was held on the new reality of business and trade relations between Russia and the world in the context of sanctions and trade wars. The experts discussed the formats of foreign companies work in Russia, the future of the WTO, as well as new threats from the continuation of the sanctions policy.

The moderator of the discussion, Alexander Ivleev, CIS Managing Partner, EY, expressed the opinion that Russia has suffered from trade wars, which affected the Russian economy growth forecast (1.5 vs. 1.8). At the same time, in 2018, the Central Bank acquired a record 92 tons of gold, including purchases from local Russian producers; in general, Russia almost sold off its share in the US national debt, which demonstrates detaching from the sanctions initiator.

According to Esko Aho, Executive Chairman of the Board, the East Office of Finnish Industries; Prime Minister of Finland (1991-1995), in the short term, Russia and the EU will still suffer from sanctions and counter-sanctions. In this regard, it is important for Russia to diversify its economy in order to reduce its dependence on oil and gas, to focus on high-tech sectors, which is difficult in the situation of sanctions and counter-sanctions. It should be borne in mind that, the major players in world trade are interdependent as never before.

“In the global economy, the only way for countries is to communicate with each other. I am optimistic, we need to jointly solve problems, ”Mr. Aho is convinced.

“The best answer to sanctions is not counter-sanctions and not an attempt to cause the same pain, but to think about yourself and your investment climate. The better it is, the better the economy will be,” adds Alexis Rodzianko, AmCham President. The participant in the panel discussion notes that companies that are already operating in Russia have to take care of their business and comply with sanctions, which limits their opportunities and field of activity, although not very significantly. Many companies, including KFC, Ford, McDonald’s, continue to work in Russia and bring investments not only from the USA, but also from other countries, as they are transnational companies. More than 80 companies surveyed by the American Chamber of Commerce invested more than USD 80 billion in Russia, but they trade with Russia across third borders. Russia remains a promising market for them.

The psychological effect of sanctions is stronger than the practical one, because not everyone reads beyond the general heading “Russia under sanctions,” although this is not Russia, but individual people, industries, notes Alexis Rodzianko. Foreign companies in Russia continue to invest, it’s just that they read the new rules of the game very carefully. When a good project in Russia opens with the United States and China, they say nothing about it in order not to incur new sanctions.

This idea is supported by Alexey Repik, President, the All-Russian Public Organization “Delovaya Rossiya”, Chairman of the Board of Directors, R-Pharm Group. “The sanctions look worse than they are really described in the documents. The effect of sanctions is in uncertainty and reduced opportunities: sanctions demotivate investment, investors become more politically biased. In order not to pay attention to sanctions, you need to be so much the best of all, so that others could not do without you.

A discussion participant noted that “now is a good time for entrepreneurship, oddly enough, since in the challenging situation an entrepreneur’s abilities manifest themselves best. Under conditions of uncertainty, the role of a person becomes more prominent both in politics and economics.” Therefore, Repik explains the intensified interaction with China and other Asian countries by a logical consequence of an innate tendency to anticipate and foresee typical of young and flexible Russian entrepreneurs.

Aleksey Repik points to the appearance of a destabilizing tendency to perceive business patriotism and focus on the country as a risk and a threat. "Economic patriotism is the normal characteristic of developed countries." This rule is part of the generally accepted system of values around the world, but the political nature of sanctions can break such a system.

The breakdown of the generally accepted system of interaction is already happening due to the effect of the US law on control over critical technologies,” Aleksey Repik notes. Critical technologies are interpreted very widely and include biotechnology, artificial genetics, and intelligence. Sanctions pose significant obstacles for cross-country technological interaction. “This is a direct blow in the future, because what we can do together, we do apart, which means slower and more expensive. This applies to both the antagonists in the sanctions process and their partners.” The attempt to encapsulate the creation of technologies at the national level raises the question of how further the meanings, opportunities and chains of additional value of technologies created in the name of universal progress will be created.

The observed crisis of the multilateral trading system in the last 2–3 years roots not from sanctions, but from structural changes in the world over the past two decades, notes Alexander Knobel, Director of the Center for International Trade Studies, RANEPA. “Since the end of the 20th century, the countries of the developing world have really begun to catch up with the countries of the developed world. The developing world is becoming a source of foreign investment. The value-added trade has grown, which means that the economy has become more interconnected due to distributed production. However, all this was in accordance with the rules of international trade formulated by developed countries at the end of the 20th century. Yet, the weight of the developing world has changed significantly; now we see a request to change the rules but it has not yet been answered. Hence, the crisis of the trading system in the world, the uneven distribution of the benefits of liberalization among economic actors.”

According to the session participant, this crisis of the trading system is reflected in the WTO. Nevertheless, accounting for the fact that the WTO as a system of arrangements is like a key infrastructure in a house, no one is interested in destroying it, and everyone wants to rebuild it for themselves. Although now "the negotiation process is beyond the scope of the negotiations at the table, but has already moved on to commercial battles."

Esko Aho supports Mr. Repik: “For a variety of reasons, there are governments around the world, who are convinced that we need to get away from the world order that has prevailed since the end of World War II. This is not only American practice. I think this is a significant risk. If we convince ourselves that instead of rules we need deals with various parties, it will be bad. Therefore, I believe that business can survive if it protects these rules and demands from the governments to fulfill the obligations they have assumed.” The speaker notes that the international business community is not active enough to protect such common interests. Business is interested in predictable rules of the game, and the voice of the business should sound louder.

As a conclusion, Alexander Ivlev made a 3-year forecast for trade wars. The United States and China will lose tenths of a percent of economic growth – about USD 80 billion – from legal decisions taken in 2018, including those in the framework of the metallurgical trade war and the “exchange” of the customs’ duties. Possible restrictions on the import of metals into the markets of Turkey and the EU as a response to US decisions in the global metallurgical trade war could adversely affect Russia and could amount to $ 0.5 billion in losses for the Russian economy.

The international trading system can develop along three scenarios. The negative outlook boils down to the fact that the world will slide into an era of total protectionism. Optimistic: everyone will be able to agree and rewrite the rules of the WTO, so that all disputes could be resolved only on this platform. Most likely, according to the forum participant, the balance in the WTO will be found only in the area of trade disputes resolving and in the notification system, which is also important.

“When we talk about sanctions, the problem is the uncertainty that is created around future possible changes within the sanctions regime,” Ivlev said. Considering that some US representatives are talking about the need to introduce new sanctions every 2-3 months, the business simply does not have time to get used to and adapt to new conditions, as it was at the end of 2017, which creates risks for investing in the Russian economy, puts pressure on the Russian ruble and leads to its underestimation. “In the future, trade wars will be more predictable, and I think that countries will nevertheless create bargaining positions and ultimately follow the path of new rules agreeing; as for sanctions and pressure on the Russian economy and the ruble, this is less predictable, because has a political component." However, Ivlev concludes, the Russian export agenda remains positive so far, regardless of the sanctions pressure.