HomeNewsNews The World and Russia in the Medium Term (VIDEO)

The World and Russia in the Medium Term (VIDEO) 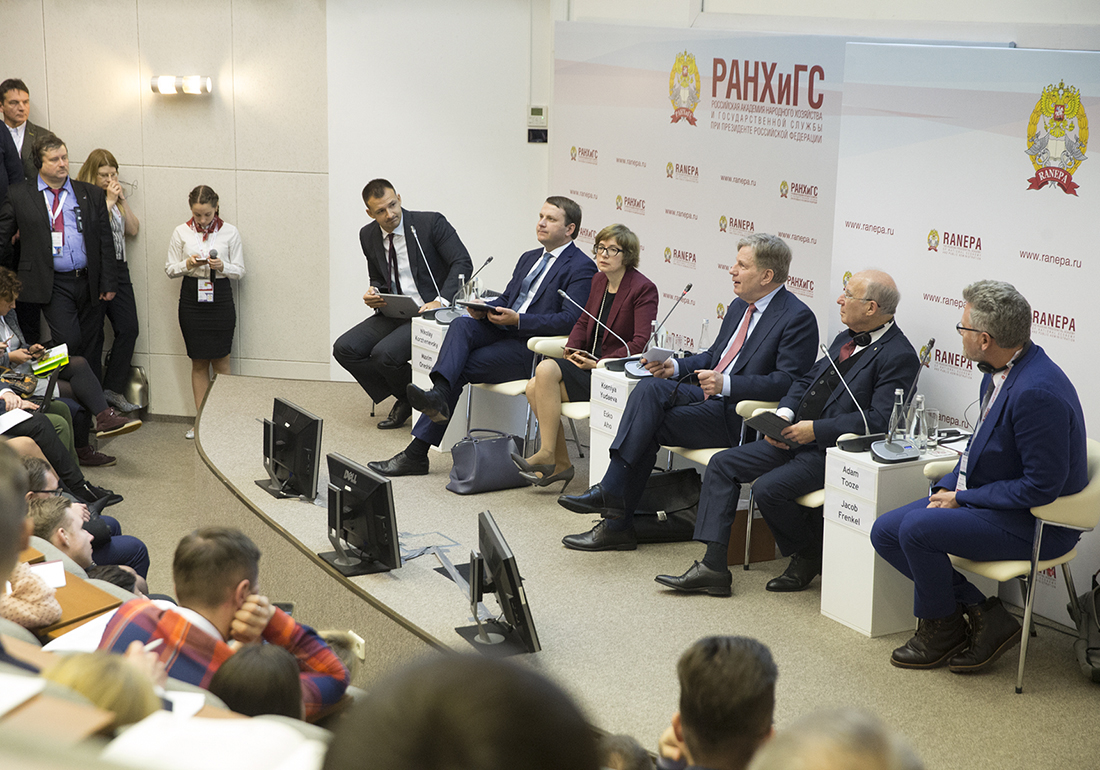 At the very beginning of discussion at the 10th Gaidar Forum, Nikolay Korzhenevsky, moderator and also author and presenter of analytical newscast Economy  “Course of the Day” asked Maksim Oreshkin, the Minister of Economic Development of the Russian Federation, about the global economic prospects and growth points.  The Minister answered that, according to the last year forecasts, the trend for slowing down the global economic growth was registered. ‘In the future, it is expected to decrease as well, at least by 3%,’ Maksim Oreshkin said.

In addition to the economic slow-down of the countries of the world, the Minister of Economic Development highlighted a global, according to him, topic, i.e. the USA and China. ‘Due to cold relations between the two countries, now, there is quite a large scale decrease in the Chinese trade in the global market, both in import and export. All this entailed negative deviation from the medium and long-term trend,’ Maksim Oreshkin said. In addition, according to the Minister, nowadays, the probability of recession is certainly high, but it must not go global, as, for example, in 2008. ‘A large-scale economic slowdown requires a very serious crisis. Even if we go to 3%, this would be insignificant changes in all histories of the existing economies, including the Russian,’ Maksim Oreshkin said.

At the moderator’s request, Franziska Liselotte Ansorge, Head of the World Bank Development Outlook Group, commented on the results of research Darkening Skies, a report on the global economic situation. She agreed with the opinion of Maksim Oreshkin that currently there is an obvious slowdown in the economy. However, these delays, according to the representative of the World Bank, area very flat and now the growth level will be higher than the potential. The Darkening Skies means risks,’ Franziska Ansorge said. The Head of the World Bank Development Outlook Group added that there are 2 major risks for the global growth: the first one regards financial markets and deviations therein, and the second one regards the risks of probable escalation of tension in trade. However, the speaker emphasized that the realization of the above would result in 5% of the global export only. Franziska Ansorge, as other experts, identified the problem between the two largest global economies: the USA and China. She drew the attention to the fact that 40% of the global GDP and 20% of the global trade account exactly for these two countries, that is why their simultaneous slowdown may impact the whole world.

‘The effect of those collisions that we are witnessing in terms of actual tariffs being currently accepted is, unfortunately, not taken serious. Actually, everything depends on the mindset and mentality of openness for new technologies, ideas, people and trade as a whole,’ – Jacob Frenkel, Chairman of the Board of Trustees, JP Morgan Chase International, said. He also mentioned that due to the access in the global market, as a consequence of the global growth, many people had an opportunity to withdraw from poverty, that is why it is very important for these tensions and trade wars not to impact the negotiation process. According to the speaker, it would be a mistake to think that only bilateral relations matter, everything is interrelated and has a more complex mechanism than we think. ‘If we do not see absolutely every screw in this machine, it does not mean that an individual screw may not deteriorate the entire machine!’ Jacob Frenkel said.

To the question of the moderator of the discussion of what the Central Bank is preparing for, Ksenia Yudaeva, First Deputy Governor of the Bank of Russia, answered that the bank, in terms of renewal of the reserve and financial stability, is preparing based on the hard scenarios that happened in our history. When commenting on the today’s situation in the financial markets, the speaker also noted that the year 2018 was quite unstable in the wide spectrum of markets. ‘We already are living in the period of high volatility, all central banks shall quickly learn to react to all sorts of situations,’ the Deputy Governor of the Central Bank said.

To the question on the national debt and the amount of the accumulated debt of the global economy, the minister of economic development of the Russian Federation answered that we should not pay attention to the debt level only, it is also important to realize the effectiveness and tasks of its expenditure. Maksim Oreshkin is sure that, each year, the effectiveness of expenditure financed through the debt decreases and the whole system becomes less stable from the point of view of the pace of economic growth and debt burden.

In furtherance of the topic, Jacob Frenkel added that excessive crediting creates a vulnerable situation in the market. ‘The banking crisis may be converted into a financial crisis. And if this crisis occurs, it may, quite really, be converted into an economic crisis that, in turn, entails a political crisis,’ the speaker said. Jacob Frenkel is sure that all these crises could be better controlled at the very birth of the problem.

When commenting on the history of crises of many countries, Esko Aho, the Chairman of the Board of Directors of the East Office of Finnish Industries, said that the economy really needs them. ‘This is the fundamental base of everything,’ Esko Aho said.

According to Jacob Frenkel, reading economical books plays a significant role in the resolution of a crisis, as the global history of economy often repeats itself. ‘Let us learn lessons from these crises,’ the speaker suggested.

In the course of the discussion, Adam Tooze, Professor of History at the Columbia University, also addressed the topic of condition of the Chinese economy at the moment. He drew our attention to the ongoing historical transformation. Now the capital is leaving China, and the Professor hopes that the communist party regime will be able to manage it.

By the end of the discussion, the speakers concluded that the risks are substantial and that there is a plenty of alternatives of quite wide recessions. ‘We hope that the things that artificially provoked problems in the economy will somehow evolve in the imminence of danger,’ Nikolay Korzhenevsky concluded.