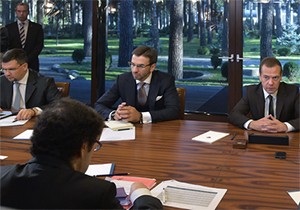 Prime Minister Medvedev told the audience that the federal budget had been already approved and would be referred to the Duma by the end of the following week. PM Medvedev suggested that the group discuss some peculiarities of the document, taking into account the current economic picture and emerging trends regarding economic growth in Russia. According to the Ministry of Economic Development of the Russian Federation, there was a growth trend recorded in September 2015 and a continued positive dynamic is anticipated for the 4th quarter of 2015.

According to Vladimir Mau it is too early to say that the Russian economy has already gone through its “lowest point”. Notwithstanding the fact that new crisis factors are not forecasted in the available data, this apparent equilibrium is not yet stable. “Both growth and decrease may follow; the conclusion of the economy’s `lowest point` period is not clear yet” - said RANEPA president. 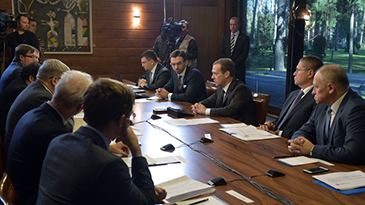 “According to our estimations the length of this period may vary depending on the outward conditions (it is not only about oil prices but also about metal prices, fertilizer prices, the level of demand for Russian gas supplies and other exported raw materials) from 3 or 6 months to one year” – explained Vladimir Mau. He specified that the Russian economy would be powerful enough to “push off” from that “lowest point” no sooner than the first or the second quarter of 2016.

“This year devaluation of the rouble and inflation acceleration let Russian companies in almost every industry increase the mass of profits what was enough to implement their investment projects despite of lack of outward financing and tight credit rates” – said Vladimir Mau.

The meeting took place at the prime minister`s residency in Gorki.