HomeNews Vladimir Putin, the President of the Russian Federation awards the Order of Courage to RANEPA graduate, Konstantin Parikozha

Vladimir Putin, the President of the Russian Federation awards the Order of Courage to RANEPA graduate, Konstantin Parikozha 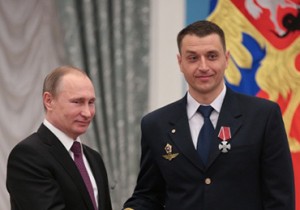 Konstantin Parikozha, graduate of the Graduate School of Corporate Management, RANEPA, and pilot with Orenburg Airlines, who saved the lives of hundred passengers, became the recipient of the national Order of Courage award on March 10, 2016.  The awarding ceremony  took place in the Kremlin and was led by Mr. Vladimir Putin, the President of the Russian Federation.

The President awarded the first officer, Igor Kravcov with Medal for Bravery.

On February 12, Captain Parikozha was heading the crew of Orenburg Airlines flight R2554, which took off according to schedule from Punta Cana in the Dominican Republic en route to Moscow with 351 passengers and 20 crew members aboard. The liner had flown for about 3 km, when one of the engines caught the fire. Half an hour later, Captain Parikozha and Mr. Kravcov were able to land the liner successfully back at the airport of Punta Cana. None of the passengers or crew were injured.

The President highly appreciated the feat made by the crew of the liner. “Hundreds of lives were saved by top notch pilots Konstantin Parikozha and Igor Kravcov. Their moderation, professional behavior, proper and decisive actions allowed to avoid a terrible disaster in the sky over the Dominican Republicwithout any victims or  injured, to land a burning large-tonnage liner and successfully evacuate the passengers” – claimed the Russian leader.